I learn a lot from competition anglers, both in the USA and in Europe. In particular, Lance Egan’s attractor patterns have been money for me. 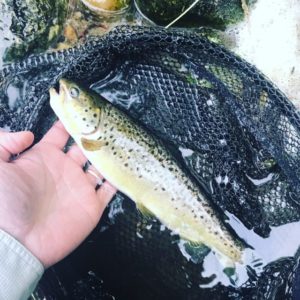 I often fish Frenchies, Rainbow Warriors and Red Darts. I tweak the patterns a bit when I’m feeling industrious, but they’re fundamentally the same flies.

Competition anglers compete at stretches that other world-class people ahead of them have thoroughly fished. So, when they say a pattern works, I want to listen.

When I saw Lance’s video on his Corn-Fed Caddis, I tied up a few, just for fun. On my last outing at the Farmington (here), I threw some of my usual go-to dry flies.

And, had no takes.

I decided to give the CFC a trial run at some slow, bubbly water. On the first cast, a fish floated up, eyed the fly a bit, hesitated, and, then, gingerly sipped it.

Miraculously, I waited the right amount of time before setting the hook, and a clean-looking brown was kind enough to say hello. Others followed.

There’s something magical about CDC. It traps air bubbles and has life-like movement. I add it to some nymphs, too, and those work well at deep holes or soft water.

To save money, I buy a big bag of CDC. I prefer dark dun for most of my patterns.

So, give the CFC a try. Video here. It’s a very easy fly to make.

A safe and restorative July 4th to all. May we always fight tyranny in all of its insidious forms!