It was a multi-faceted 4th of July for me at the Farmington. The good, the bad and the ugly. 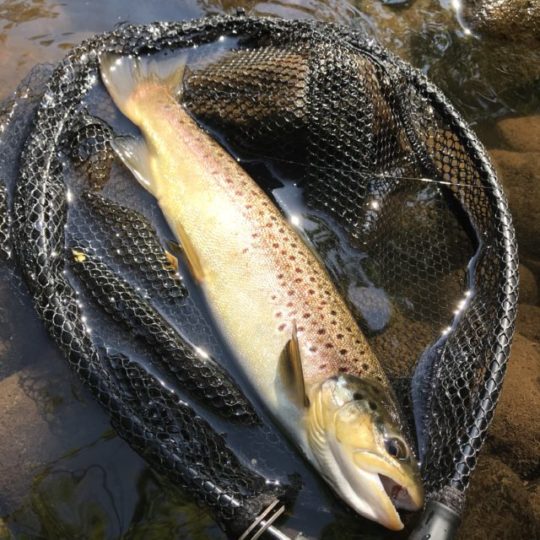 THE GOOD
It was the usual routine, meaning, I was on the water at 5 am and back home in time for afternoon duties and to make dinner.

I ran into quite a few browns. The best fish was a 14.5″ Survivor Strain brown stocked in 2017, with an orange elastomer behind its right eye (up top). It was a wily fighter and ducked right away towards some branches. This is a spot known for break-offs, so once I felt the take, I quickly tightened, put on a lot of side pressure and used the butt of the rod.

Thankfully, the 5x fluorocarbon held, but I afterwards had to trim off a good chunk of tippet, as it was badly abraded.

I split water with a spin fisherman, who was killing it with bait. He was the nicest person. We both came upon the same stretch at the same time from opposite directions, and we convivially said that we were happy to share the run. We chatted off and on while we fished. What a nice guy.

Later in the morning, I landed quite a few browns on dries. No monsters. More dinks on dries, but it was fun because they were rising just 10 to 15 feet away from me. A size 26 Parachute Adams did OK, but the Lance Egan Corn-Fed Caddis again crushed it. Other dries failed miserably.

Which leads me to….

THE BAD
I was front-ended in the morning. I was saving the choicest water and thought I’d start at the bottom of a run and work up. But, an angler just popped in, saw me, heard me clear my throat, and silently started to cast.

Later, I was back-ended. A guy came up, waved and plopped his newbie friend right below me. He had a particular expression on his face: Hey-I-am-back-ending-but-my-friend-is-a-rookie-and-this-is-a-sweet-spot. He then literally dashed off.

The friend looked at me with a guilty expression. Then, he started to cast like a mad man. He was flinging a streamer and chopping up the water before I could say anything. Oh well.

Which leads me to….

THE UGLY
At around noon, a guy and his dog showed up downstream, about 40 feet away. The dog jumped in over and over to retrieve sticks the guy threw. Then, the guy took off his shirt, and I saw a blindingly-white blur of skin jump into the river. That was all fine, as they were far away. And, I had on sunglasses.

The guy started eating a sandwich once he was back on the bank. But, then, the dog waddled to the bank, sniffed, and started to arch its back. Oh no, I thought, I recognize that stance.

Well, there’s no need to use euphemisms here, as we all are friends: The dog took a massive and steamy dump right there on the bank.

I expected the owner to saunter over with a plastic bag. Nope. This multi-party glance-fest kept going, as this was a long affair. The dog clearly was very old, and it at times looked like it was going to fall over as it strained. That geriatric pooch needs some Metamucil, I thought.

I started to grin, as I kept casting and kept looking at the pair out of the corner of my eye. Yep, I thought, the guy is going to pretend that I didn’t see that.

Really? What do you think, Jim?

And, all the while, the guy kept eating his sandwich while watching his dog do its business. And, yes, they did leave behind the “donation.”

Thankfully, I already had my PB&J.

On his way to the car, the guy surprised me by peeking out from the bushes behind me. “There are light Cahills hatching down below, just so you know,” he said.

“Thanks,” I said, with an idiotic smile on my face.

I wanted to blurt out: “You sure they weren’t brown Cahills left on the bank, you douche? And, great job of leaving behind the other kind of brown trout!” Of course, I didn’t. Since my one-and-only fishing altercation (here), I now just bite my tongue.

And, that, my friends, was my Farmington 4th of July.

9 thoughts on “Farmington 4th of July”