The stars aligned, and I was able to devote a full day to fly fishing. It seemed fitting, given that Saturday was the first day of autumn.

I awoke at 3:30 am and made the pilgrimage to the Farmington. The upper and lower sections of the river had been stocked a week or two ago, but I decided to start in the middle, the permanent TMA section, to see if I could dupe any of the wary browns.

I also wanted to fish that area before CT DEEP did their annual electro-shocking foray to collect (and, later release) large browns for their Survivor Strain program.

As I’ve written before (here), September is a tough month, but I hoped the change in the weather would help. What a difference a few weeks made! Gone were the heat and humidity of early September, and I welcomed the cool and bracing air.

I was the first in the dirt lot and quickly found myself on the water. Given the high and stained water, I had tied up some new, colorful junk flies and wanted to test them out. I had Squirmies in different colors and egg patterns. 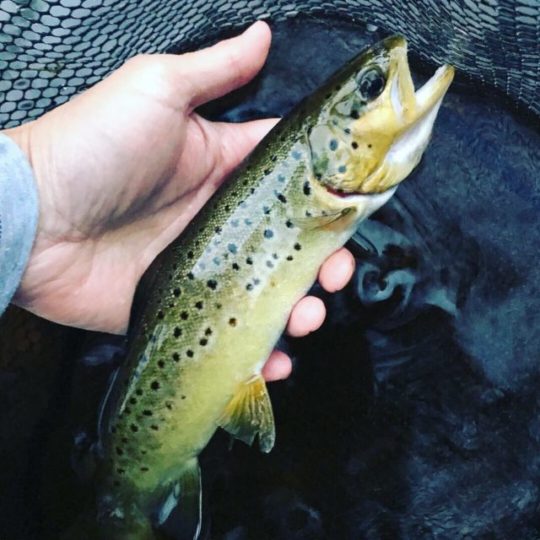 The flies quickly worked. A few decent browns showed up, and I was relieved to be rid of the skunk early in the foray.

An angler showed up with his dog and a spey rod and silently moved close below me. He stood at the precise stretch I was going to work and at which I had landed two fish. He was working on his two-handed casts, and it was fun to see him do it.

But, his fly line was heavy, and it slapped down around him as he set up his spey casts. He was standing in the best run of that part of the river, and I’m sure the fish were spooked. So, after a few casts, I walked to a different spot.

The real target, though, was Spot C, which consistently produces big fish. I worked that stretch thoroughly and had no takes. Perhaps, I was the second angler there in the morning? Perhaps, the prior heavy rains had pushed big fish to a different area? I went through all the scenarios but decided to move on.

I drove to the upper section of the river. I had not been there since early spring. After a hearty sandwich at the Riverton General Store, I ran into some rainbows that had that fresh-from-the-hatchery paleness to them. They surprisingly fought hard.

With that out of my system, I drove to Spot D, a reliable producer of browns and holdovers. It was another shut out. September can be very hit-or-miss.

I drove to a final stretch, an area that has not been re-stocked and houses holdover rainbows year-round. Nothing. More hide-and-seek games. That was disappointing, but I find that the fish sometimes aren’t going to take a fly, no matter what profile or size or color I throw. The consolation prize, though, was that very few anglers were out and that let me cherry pick the water.

As I approached my ninth hour of fishing, I decided to walk slowly downstream and swing a streamer as I ambled back to the car. Suddenly, I saw a rise. I froze, and a few minutes later, saw another rise. It was a lone fish. I looked around and saw one small BWO flying around.

I clipped off my nymphs and put on a Euro dry-dropper set up. The Thomas and Thomas Contact and my homemade Euro leader do a decent job of casting dries. I crept towards the target zone as slowly as possible. The fish rose a third time.

I was above the fish and off to its side. I looked at the current seams and saw that a reach cast would let me have a decent drift if I afterwards fed line and let the flies drift down. I got to work.

Suddenly, I heard a plop and saw my Egan Corn Fed Caddis disappear. Miraculously, I did not set the hook too soon and waited a second before I flicked the rod back. It was true joy to feel the rod bend and a decent fish pull.

I applied some side pressure to get the fish above me, and once there, I put the wood to the fish to move it to the faster-moving upper area of the water column. The trout tired quickly, paused to catch its breath and soon floated down towards my net and eager hands (see “The George Daniel Fish-Fighting Technique“). Come to Papa, my dearie. 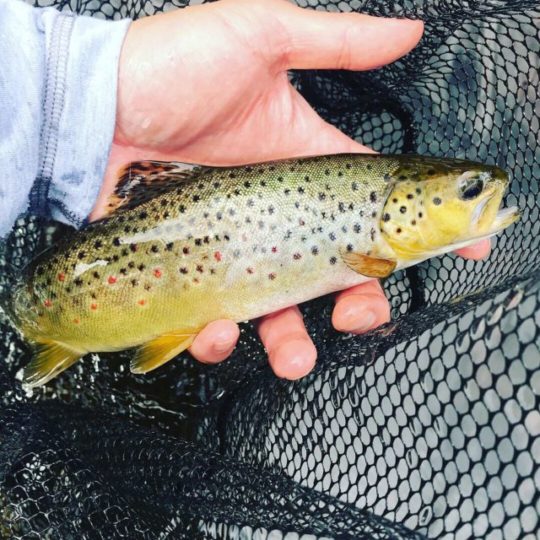 It was a brown trout, and I was elated. I admired its adipose fin and red spots.

To land it on a dry fly, when there was scant bug activity, made it feel extra-special.

With that, I reeled up. It was a nine-fish day, with most being browns or holdovers. No behemoths, but it was a fun outing, nonetheless.

I’m glad we have turned the corner weather-wise. As spawning behavior kicks in and brookie eggs appear in the drift, the fishing will improve.

See you on the water!