It wasn’t in the cards originally, but I’ll take it.

We had family plans to be away this weekend but had to cancel at the last minute. One of our children has a bad cold that isn’t going away. So, I went to the Farmington today. With flows cut, I was hoping for some dry-fly fishing. Visions of rising fish danced in my head.

Honestly, I had some trepidation. I find that trout in late-summer are finicky. Water is low, the sun is high and bright, and the fish have seen everything.

Spot A proved difficult. I rolled some fish with a dry-dropper on my Euro rig, but had no takes. This is a technique Jamie taught me. Throw a big dry and see if any fish show themselves, so that you know where they are. Then, keep throwing dries or switch to nymphs.

In my case, the Lance Egan Corn-Fed Caddis continues to get the most looks/takes/fish among all of my dry flies. It has been a great searching pattern for me.

I then floated a NZ strike indicator. Also, nothing. I started with those two approaches because I wanted to stay on the bank and be far away from any leery fish. I rotated flies over and over.

In the end, I tightlined with the smallest and lightest nymphs I could. I stayed on the bank. It worked. A few fish came to the net, all browns. Takes were extremely soft, barely registering on the sighter.

I switched back to dries and had better luck getting fish to inspect my flies. This time, I crouched down at the bank to keep low my profile. The fish were very cautious. Trout rose up, eyeballed my offering, drifted back with the fly a few yards, sometimes nosed it, but never took it. At least, I was seeing activity.

At that point, a friendly angler showed up, positioned himself 15 yards above me and started nymphing and swinging his flies at the end. All that immediately put down the fish in front of me.

The angler was friendly. He fishes the river a lot, and I’ve seen him a few times, including at UpCountry. But, I was bummed. Eventually, he moved below me, and I decided to move up to where he was.

I cast indifferently towards some very shallow water. I did it with no expectations and just thought it would be good hygiene to “grid up” that stretch in my mind and just work it methodically and thoroughly.

On the second cast, I felt a very strong take. A big brown rose, flashed and started to pull. I could see it start to panic and begin to make a break downstream.

Suddenly, I remembered a technique mentioned in George Daniel’s newest book. I pointed my rod tip upriver as I usually do. But, this time, the tip was in the water.

This let me put the fish into deeper and slower water along the bottom. That quickly calmed down the fish and stopped it from bolting downstream. With side pressure, I then was able to lead it above me.

Once I had leverage, I then put a lot of pressure with the fly rod’s butt. I pulled up the fish so that it again was in fast current near the surface. It’s like putting a trout on a treadmill.

Amazingly, per George’s advice, this very quickly tired the fish. It was in the net in about a minute. That George Daniel is a sage!

The brown had a very large tail fin.

I was stunned. The fish was gorgeous and had leopard spots. Its colors were a melange of butter yellow, brown, red and tan, and it taped a touch over 17″. The brown had an unusually small adipose fin, and I didn’t see any elastomers. Wild, maybe?

Later, I went over to where the fish had been holding. From the bank, the skinny water appeared to be only inches deep. Once there, I stepped into a one-foot deep and very short slot at which the fish was dining. The river is like an English muffin, full of nooks and crannies.  I definitely will fish again that spot!

I jumped into the car and drove to other spots the rest of the morning. It was fun trying to coax more fish on small nymphs and dries. I caught more. But, my heart wasn’t in it. I knew I already had peaked for the day. Plus, the river was absolutely jammed with anglers who kept front-ending each other and walking near each other’s casting paths.

I debated hitting some of the more secluded areas I know. In the end, I felt the day was good enough. It was time to reel up. 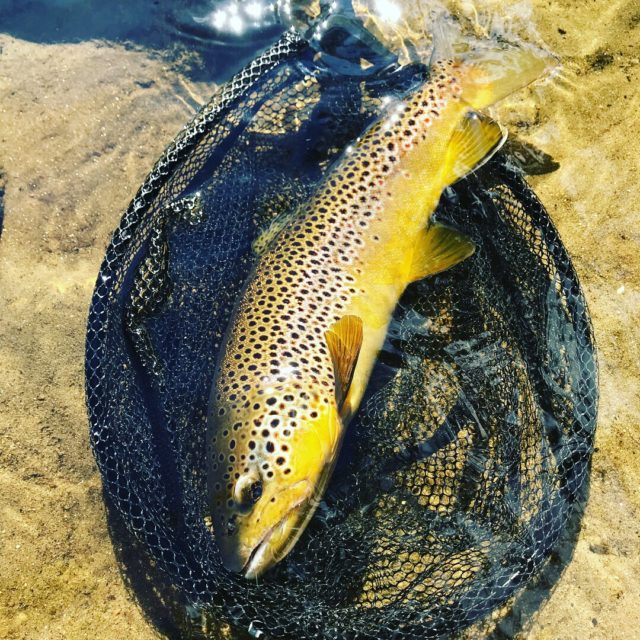