To beat the heat on Sunday, I made it to the Farmington by 5 am. The water was 58 °F, and the flows looked good.

I was hoping for some dry-fly action and optimistically brought two rods: the 0904-tip flex H2 for dries and the 11303 Contact for tightlining. The H2 is a sweet rod to cast. And, with a 6x Harvey Slackline leader, the dries make little disturbance when they land on soft water.

When I made it to the river, fish already were rising sporadically. I threw dries for a good chunk of time and landed some small browns. Dinks on dries. Then, the action stopped. Other anglers cycled in and out, above and below me. No one had fish on the line, from what I saw.

Curious, I switched to tightlining and worked a spot that has generated for me before. Nothing. I explored water above and below that spot. Still nothing.

Bugs were popping everywhere, from Caddis to Midges to various Mayflies, some large and some tiny.

I went back to the lucky spot and put on a size 20 emerger. One cast in, I saw the sighter pause and set the hook. I could tell right away that this was not another dink. The Force was strong with this one. The fish shot down-river. I scrambled to the bank to keep it above me.

One angler came over to watch the fight. An audience! It just heightened my nerves. The fish pulled line from the reel three times.

“I think so,” I said. His question made me think of this scene from “Animal House”.

This fish felt extremely heavy and fought doggedly. After a few more reel pulls, I tamed it. 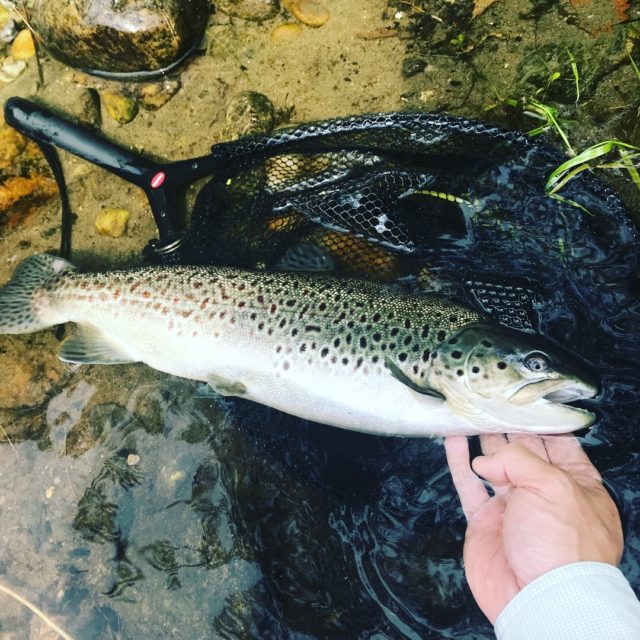 The brown taped at 19″. So, my hunt to make the 20-20 Club continues. The fish was missing an adipose fin, but I didn’t see an elastomer behind the eye. It was fat and healthy.

I left the fish in the net and wedged both among some rocks in the water. I like letting a good-sized fish recover at its own pace, hassle-free. I rechecked my knots and sat down on the bank, full of relief and joy. The Farmington looked even more beautiful at that point.

After some minutes, it was time for the release. This brown had some serious girth.

I fished a bit more, but my heart wasn’t in it. It is tough to beat such a fish. I had peaked for the day.

I landed some clean browns and salmon parr while tightlining, but it felt right to reel up just past noon and drive back. The water was still a refreshing 58 °F, something to remember if your freestones are getting too warm for trout. Even as the sun rose higher, I felt comfortable while wading.

A snack awaited, and I drove home a happy man. A Dunkin’ Donuts coffee roll was a great way to celebrate seeing some Farmington browns.

4 thoughts on “The Fat Fish”