I was in a quandary last Friday night: Should I fish and, if so, where?

As I’ve written before, I’m at a life stage whereby work and family commitments don’t let me cherry-pick my fishing outings.  The schedule picks me, and I don’t pick the schedule.

Unfortunately, the forecast for Friday night and Saturday was for a lot of rain and wind. You know what that means: murky and high water and havoc for tightlining.

So, I awoke at 4 am on Saturday morning and checked all the gauges. The flows already were going up. I was tempted to turn off the phone and go back to bed but decided that it would be a great opportunity to fish streamers.

Soon, I was in the car and headed to the Farmington. Unfortunately, during the drive, I realized I had forgotten my fleece underpants. I hoped it wouldn’t be too cold. The night before a fishing outing, I set aside the clothing that I’m going to wear to minimize my decision making when I wake up early and am still sleepy. But, last Friday was Good Friday and a fast day for me, which meant that my brain wasn’t at 100%. Such is life.

I went to a particular spot that had not been stocked yet and which required some walking. The water was 50 °F, and that was a good omen; it made me think that the fish would be in faster water and active. Plus, bugs were popping everywhere. I saw Caddis, Stoneflies and a Mayfly or two.

The water was already stained when I arrived, and I wanted to get some casts in before it became murkier. I have a very preliminary Euro Streamer Game (prior post here). I’ve been working on it off and on for a few years, but only recently have felt comfortable with it.

I decided to pair a lightly-weighted streamer with a wet fly and split shot and got to work doing the “streamer pocket pick” method, about which I wrote in that prior post: I used enough weight to slowly swing the flies and let them flutter (hence, the limited weight on the streamer).

When I saw a particularly fishy seam or slow water in front of, or behind, a boulder, I paused the flies. It was something I learned from George Daniel: let the flies dangle in the current and tempt the fish with an easy meal. After waiting for as long as I could, I then slowly crawled the flies back to me.

Soon, the line went tight. I pinched it and slowly raised the rod tip, and a good fish was on.

The brown taped at 18″ and looked like a Survivor Strain holdover. There was no elastomer, but the adipose fin looked like it had been clipped and had partially grown back in. It had taken the wet fly.

Then, the gradual rain became a total and constant downpour. I mean, the skies really opened, and I felt some cold water trickle into my waders. I tightened my rain coat and hunkered down. I kept getting more and more cold, as I was sans fleece pants, but if fish are biting, I am going to keep fishing.

Bugs kept popping but, alas, I didn’t see any rises. So, I kept at the streamer game.

I worked the run thoroughly, casting, pocket-picking, retrieving, and then taking two steps downstream and repeating the process. Nothing. I rotated streamers. I started to shiver from the cold.

At this point, the water was really rising. I learned later that the flow was at 1,300 cfs. All I knew was that it was becoming murkier and faster. I saw a very interesting seam above and across from me and cast towards it. A few seconds in, I felt a “thump” on the all-mono rig, and a good fish jumped into the fast water and pulled line from my reel for a long time.

Now, this is where things usually become dangerous for me. My instinct was to start chasing the fish, and that at times has meant slips and falls. This time, I did my best to angle the fish towards the bank and slowly pick my way to dry ground. Amazingly, the fish stayed on, and I employed the George Daniel Fish Fighting Technique to get the trout above me, improve my chances and bring it in quickly. 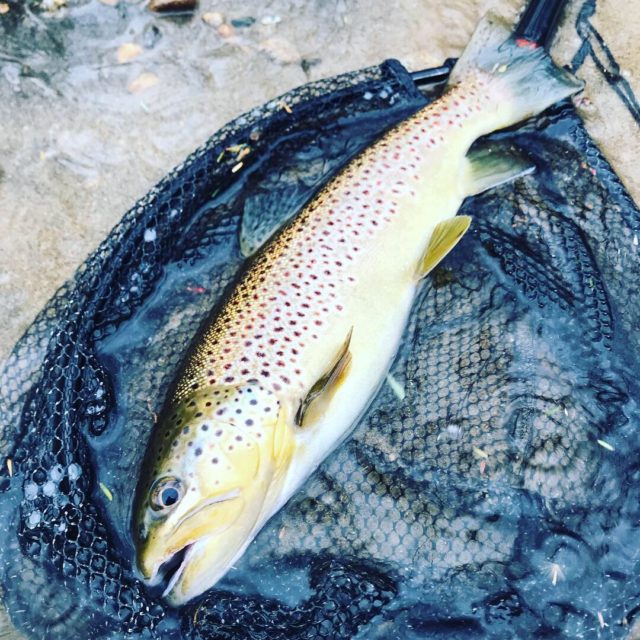 Like the other fish, this one had an abridged adipose fin but no elastomer. And, what a fish it was. So trite, but so true: a photo truly cannot capture the beautiful spectrum of colors found on a trout.

I kept working this same run over and over, trying to squeeze completely dry the lemons before moving on. I suspected that the crowds had descended upon other parts of the river, particularly above the Still River, and who knew what I would find if I moved elsewhere?

Soon, there was another “thump” on the rig, another strong fight, and another good-sized brown was in the net. Wow. It looked familiar. Sure enough, it was the first brown I had caught a few hours earlier!

I was surprised. The fish fought very hard, and I guess this is another reason why we should play fish as fast as possible: They can recover quickly, as a result. Here is the release after I had caught the fish the second time. As you can see, it spiritedly swam off.

Fishin’ in the rain #flyfishing

After some more casts, I decided to move to other spots. I employed the Euro Streamer Game at those areas, too, but didn’t get any takes. Trout can be funny in that way.

I fished hard for eight hours, and it was a good time, albeit very wet and cold. I learned a lot. Every fishing technique has its place and time, but for high water, the Euro Streamer Game has been a good page in the playbook for me.

Sorry to say goodbye to these critters, which you