It’s brutal out there.

With flows low, sun high, and water warming, last weekend was one of those “push” times. Do I fish or not? With gas very expensive (a savings tip below), I’m being much more choosy as to whether I go out and fish and, if I do, how far I am willing to drive.

On Sunday, I decided to hit two rivers with the hopes of avoiding the mid-day sun when fishing feels soporific while trout hunker down. I was keen on trying out my new Thomas & Thomas Avantt 905. I’ll write more about it after I’ve taken it out for a spin in Montana, but I already think it’s a great rod. 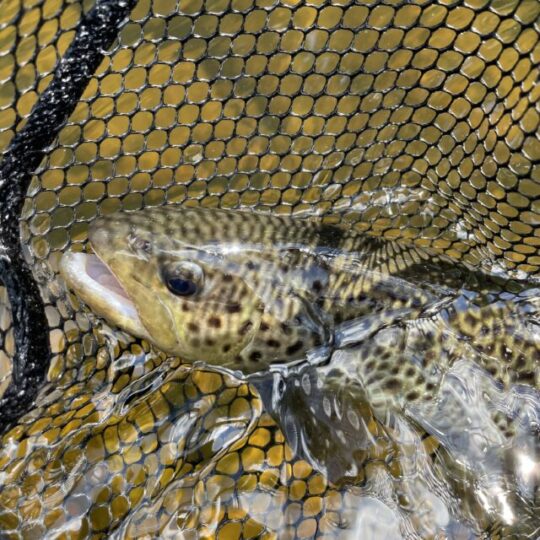 Fortunately, even though the sun was bright and high, I found rising fish all morning. A nice-looking brown said hello, and I was officially on the board with the new Avantt.

At one quiet area, I found a slow slick where pollen and bugs congregate and joyously found a pod of rising fish. I looked down at the water and didn’t see any bugs in the drift, save for a few spinners that looked like they were spent Sulphurs.

The rise forms were curious, too. The trout were taking something under the surface and would at times show their dorsal fins. But no heads, no bubbles were in view. They’d eat and happily and calmly wriggle back down into the depths. At one point, I saw a beautiful brown that made my heart leap. I saw a large, buttery brown tail of a fish that suggested that it was an old timer.

I started to cast.

Fortunately, my new five-weight at close quarters didn’t spook the fish. I’m not a fan of casting heavy-ish line at achingly slow water to rising fish. I think the heavy line hits the water and alerts the fish. But the fish kept rising, and I kept casting, progressively going down to size 30 dries. I’d get looks but no touches, like an awkward middle-school dance.

Eventually, I decided to head back to the car to get my 000-wt. Two casts in with 8x on, a fish quickly sipped my fly. I thought it was one of those little dinks. Small fish eat quickly and then head back down for cover. But this fish pulled hard and kept pulling.

At first, I thought I was foul-hooked, which is hard to do when you’re throwing a single dry. But I then felt some powerful head shakes and felt I was on solid. The fish surged well below me, but with the George Daniel fish-fighting technique, I calmly reeled up and put the fish above me. After a little bit of cat and mouse, the 000-wt. did its thing, and beautiful brown drifted back into my eager net. 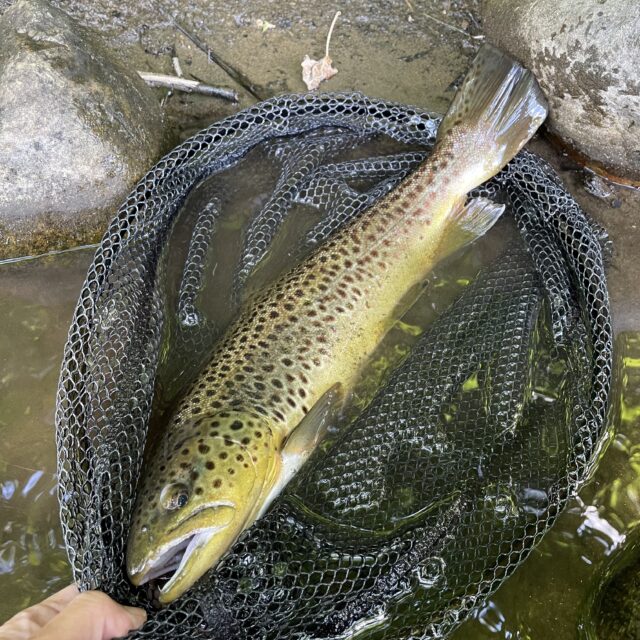 The feisty fish taped at 18″. Under the shade of the trees, I couldn’t get a good photo that showed how beautiful and splendorous the fish looked. So, an OK pic will have to do. But it had the same coloring that I saw earlier. Was it the ol’ timer? 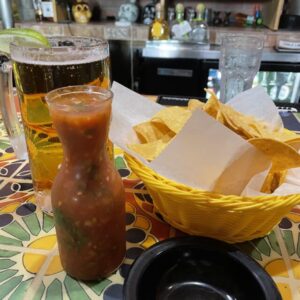 I landed some more fish, but at high noon all the kids had to go back home. I stopped for lunch at a Mexican place and had a nice, cold beer with the meal, which I almost never do during lunch. But, hey, this is a YOLO summer with the pandemic in our area finally easing again.

When I ordered a Modelo, the nice server asked me if I wanted a big or small serving. When someone asks me such a question about beer, I automatically answer “big” without thinking. Lunch was an enormous burrito, and I sadly could not fish all 20 oz. of my beverage. I was pretty relaxed when I jumped back into the car.

I drove to the second river and ran into a scant hatch of Sulphurs, but it was enough to dupe a good pile of browns, brookies, and rain-bros. Then, the action stopped as fish focused on midge larvae. I’m not keen on bobber fishing, usually. I headed back home after a 12-hour outing.

Once I got home, I looked at my Upside app and was pleased to see that I’ve saved over $80 on gas and food since one of my kids told me about it. I’m not affiliated with the company in any way, though I do get a very small credit if people sign up here or you use my referral code (“XHJEUE”). The app is easy to use. It’s integrated into your credit card feeds and essentially gives you e-coupons; on the rare occasion, you do have to upload a receipt. It’s shocking how much gas I use each year to fly fish, and I’m glad to save any money that I can.

I hope everyone has some exciting July 4th plans.

7 thoughts on “Saving Money on Gas”