Adam Martin is a talented angler and an incredible fly tier. We are very fortunate that he has agreed to join the blog. Here is his first post. Welcome to the team, Adam!

I want to say thank you for the opportunity to join the BlogFlyFish team. I’m looking forward to sharing my experiences here and learning from everyone else along the way.

One of my biggest take-aways from this blog when I first started tight-line nymphing was the fly tying ideas. After reading posts about new patterns that I knew were out on my home waters, I always felt inspired to pick up the bobbin that night and spin up a half dozen of a newly-learned fly to try for my next outing.

As my experience with tying grew (and continues to grow), I experimented with different materials, hook brands and patterns, which eventually resulted in a decent working box of flies. With many of those patterns here in old blog posts, I felt it was only natural for my first post to be on this topic.

Living in close proximity to the Farmington River, I’m able to hit the water two to three days a week, with about 90% of that time spent fishing subsurface. A lot of the nymphs I use and tie are not hatch-specific patterns; they’re merely a selection of attractors and suggestive patterns that have continued to perform admirably for me week after week.

These patterns, when paired with imitative nymphs before and during the hatch, can be a deadly combination and often leads to days where you’re catching fish on both flies (or all three, if using a three-fly rig).

The 10 flies I have listed in this post can currently be found stuck in my C&F patch, they have been used and abused over the last few months earning a place in my “confidence fly” batting line-up. All are relatively simple, quick ties, with most only consisting of three or four materials, allowing for less time at the vise and more time on the water. 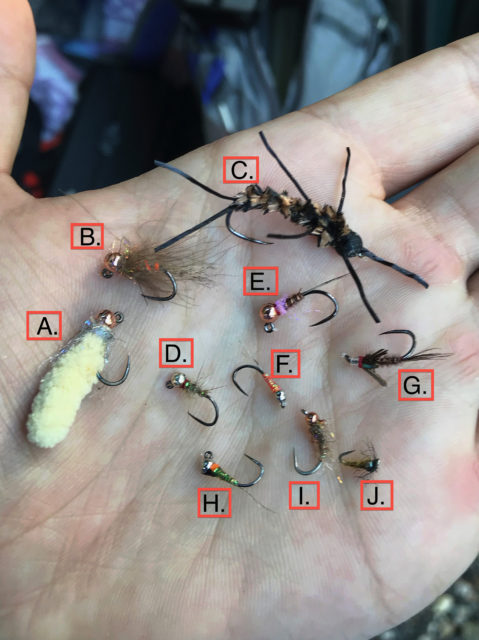 When the bite window disappears or nothing else seems to be grabbing their interest, I will swap out my anchor for this mop pattern and almost always pick up a few more fish with it.

Tying the mop body in right behind the bead with the rest extending just past the hook bend (poor example of that pictured) adds a ton of movement to this fly. You can tie it in chartreuse, but the tan/cream just outperforms it.

Devin has a tying tutorial on his blog, which can be found here: The Mop Fly Tying Tutorial.

This is another pattern I picked up from Devin at the Tactical Fly Fisher blog. This fly works well as an anchor or dropper and can be tied in various sizes and with different colored hot-spot ribbing.

The two ribbing colors that perform well for me are fluorescent orange and fluorescent pink. I also tend to use more CDC than he shows in his blog post, but it seems to work just fine. The soft hackle carrot has saved the day more than a few times, earning it a permanent place in my box. Tutorial on Tactical Fly Fisher: The Soft Hackle Carrot Fly Tying Tutorial.

Baptized the ESN this morning in the snow storm. #lazyeye

A brown who fell to the soft hackle carrot as an anchor with fluorescent orange ribbing.

If I had to choose one nymph to fish with for the rest of my life, it would be the Pat’s Rubber Legs. Seriously. This fly is tied on as my anchor over 75% of the time I’m nymphing, and always accounts for at least half of the fish I catch each outing. Stone flies have a much longer life cycle than most aquatic bugs, with some species taking up to three years before the nymphs mature to the adult stage, meaning stones can be found in the river year round (and trout love them). If you don’t have a row of a dozen of these in your box now, you’re missing out.

Nicely colored holdover from this morning

The Walts Worm is a tried and true pattern that you can find in a lot of fisherman’s boxes. The one I use the most, however, is a “micro” version of the Walt’s. I tie it as a size 20 but on a size 18 jig hook. It works really well as a dropper with the flashy ribbing and bright bead and is tied small enough to pick up selective trout that are eating small baetis, midges or caddis. Works as a great caddis pattern when tied larger on a scud/pupa hook as well.

This fly is a super versatile attractor fly, and should be a staple in anyone’s fly box. It can be tied in endless color varieties and sizes, allowing you to experiment and find what color hot spot rings the dinner bell that day.

The two colors I have listed below have worked well for me and are used often, fished as both a dropper and an anchor. Lance Egan of Fly Fishing Team USA and FlyFishFood has made this pattern famous with his variation distributed by Umpqua referred to as “Egan’s Frenchie,” and it was featured in the Modern Nymphing: European Inspired Techniques DVD (featuring Devin Olsen and Lance Egan). Tie some up, try one on, catch more fish.

Perdigon nymphs were originally introduced by European competitive fly fishing teams and designed to be simple, effective, and sink fast. Perdigon nymphs are extremely fast and easy to tie, the bright color combinations and flashy materials make a fantastic attractor.

After a search for different body materials, I found using the Veevus Irridescent thread in place of tinsel made these ties even quicker. Coated with a hard, no-tack resin and cured with a strong UV light, these flies sink like rocks even in the smaller sizes – making them ideal for getting your flies down quickly when working fast runs. The two perdigones I use the most are the Butano (Fluorescent Orange) and Peacock (with Fl. Orange Hot Spot), tied in multiple sizes to be used as either a dropper or anchor. Experiment with color combinations, the options are endless.

Massive Rainbow that fell to the Butano Perdigon at last light.

The Mercury Flashback Pheasant Tail is a Pat Dorsey pattern that I picked up from following him on Instagram. It has gained some fame as it is being distributed by Umpqua and sold on various fly fishing sites.

Unlike your typical bead head pheasant tail nymph, the wing case on this fly does not consist of pheasant tail fibers but of opal tinsel (or mylar, your choice) stretched over the top of the peacock herl, adding a nice bit of flash to a natural color pattern.

In addition to the flashback, this pheasant tail variation also replaces the copper bead with a crystal glass bead, which is believed to give the impression of tiny air bubbles on the nymph body. This fly is my go-to for when I want to imitate smaller mayflies like blue wing olives and sulphurs.

Every box has to have caddis patterns. I’m guilty of not fishing them enough when I know I should use them more. This is the caddis pattern I use, along with another consisting of a special blended dubbing, but they perform about the same.

It’s a very simple tie that shouldn’t take you more than a minute or two once you get going. The bit of flash from the SLF Prism dubbing and the copper rib is very subtle, but still enough to stand out and grab some attention.  Flip some rocks, match your fly size to the real deal and give it a go.

Barr’s Emerger is a mayfly pattern I stumbled across last fall that can be adapted to imitate any small mayfly emerger. It’s the most complicated tie on the list but worth it. The glass bead thorax simulates air bubbles on the body of the emerging nymph, as well as some flash on the underside of the body.

I typically will go to a three-fly rig when fishing this, keeping it on the top dropper higher up in the water column to try to pick up fish feeding a just below the surface. Fish it before and during a hatch and it should bring more fish to the net.

See you out there,

Christmas in April. Picked up my new @thomasandtho

Last, this one on the bobber. Nothing all day unti

Absolutely nothing until the bottom of the 9th inn