If you see someone at a river carrying two fly rods, there’s a chance that it is I.

Sometimes, I bring one rigged for streamers and another one ready for bobbers. Sometimes, I have one rigged with wet flies, while another one is ready for dries. I bring a Euronymphing rod probably just 10% of the time. I’m burned out on the technique, but it is the best way to catch big fish consistently. And, I was reminded of that again (more below). 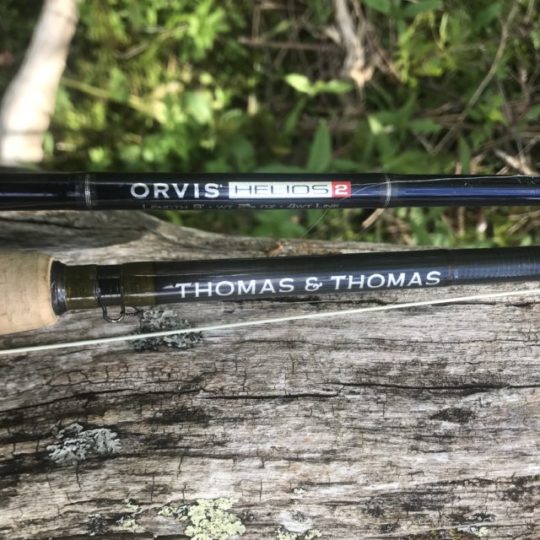 I bring two rods to be flexible. You never know what you’re going to find at a spot at a river at that point in time. And, you never know where other anglers will be, and so, I want to be ready with a technique that fits open water. I want to go with the flow.

Our rivers are loaded right now with many anglers, some of whom are new. People tend to be friendly. When others crowd my spot, I also try to go with the flow. I don’t say anything and work around them.

Yesterday, when three fly guys said hello and walked into the water where I was swinging wets, I just reeled up and walked away. I’ve decided it isn’t my job to teach etiquette to others. I also want to be a “net giver.” A friend recently shared with me a thoughtful (and, revealing) essay called “There Are Takers and Givers–Which Are You?”

Plus, I don’t want to stress out and ruin my outings. You see, we have two extended family members battling Covid-19 right now, one hospitalized and another in a very tenuous situation. It is as stressful as you can imagine.

Thankfully, they finally are on the mend, but this disease is a marathon for those who have it and show symptoms, for those who care for them, and for those who love them. And, it is wearing on families.

So, I eagerly awoke yesterday at 2:30 am to begin a Fly Fishing Saturday, to feel again the wind on my face and the currents at my legs, and, if fortunate, to see some salmonids.

Tying flies has gotten me through the past few weeks, but there’s nothing like actually fishing, in my book. (Some new patterns below. I post them on Instagram, and so, please subscribe here for timely posts, which 1,100+ followers have done.)

I hit some new water and was glad to be the first there. I decided to focus on wet flies, and was excited to see that flows were lower and that the water was 52 °F at dawn. Some bugs were starting to pop, but I didn’t see any risers. I am guessing the trout weren’t showing themselves because they didn’t have to.

I cast at a very fishy spot and was surprised to feel no grabs. Out of curiosity, I clipped off my wets and put on a favorite Euronymphing anchor fly for a test. How about some clumsy tightlining to see if anything was hungry? On the first cast, a decent brown took. A reminder: technique matters.

I moved back to wets. Eventually, I found the browns and enjoyed the smashing hits that wet flies offer. I was on the board early, and the fish were cooperative. 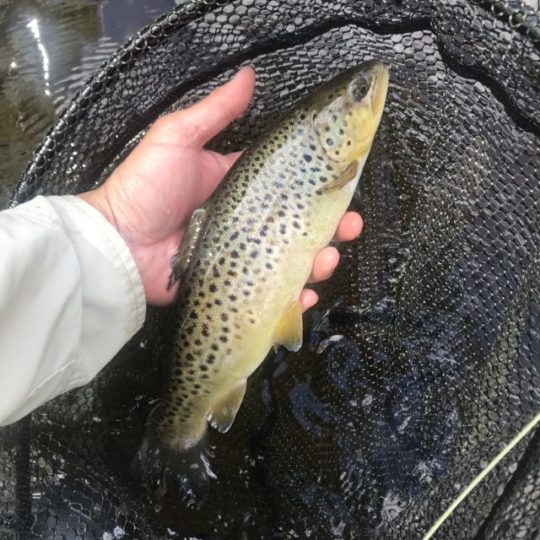 A Euronymphing angler appeared above me, kept his distance, and proceeded to work a run. I could tell he knew what he was doing, as his drifts were true and from afar. When people start to tightline, they tend to short-cast over and over at the fastest water. They also use too much weight and get snagged over and over.

This angler wasn’t doing that. He was drifting through the deepest part of the run at moderately paced water. I didn’t see a single snag. And, soon enough, he stuck and landed a big brown. He exhaled a low whistle in relief as the fish flopped in his net.

I took note of the spot. I had worked previously that area, a 10-yard stretch of dark-colored water, with wet flies and, later, with a bobber. I didn’t get a single take. Another reminder: technique really matters.

Though we didn’t speak to each other, he and I worked the run effectively and in sync. I’d cast, drift, and move down, and he would do the same, staying a good distance away.

Then, an angler showed up right below me, tentatively walked in, and wordlessly started fishing, and this ended the conga line. His casts looked awkward, the sign of a new angler, and I chose to go with the flow. I didn’t say anything, decided not to get irritated, and instead went back to the car to get my Euro rod.

I went down the Euro rabbit hole five years ago when I started to fly fish regularly. I eventually started tying my own flies, making my own leaders, and experimenting with various sighters. I read George Daniel’s seminal book and attended a clinic with him.

I learned how to ease up on weight (myth: you need to bounce bottom when you Euro), cast from afar (myth: Euro is only about short-style Czech nymphing), and, if needed, tightline at shallow-and-clear water (myth: Euro doesn’t work at the Swift River). I also threw Euro dry-droppers when conditions warranted and learned to “float the sighter.”

And, I was fortunate to see a parade of not just many fish but big fish, too.

As with all things, too much of a good thing can be a bad thing. I eventually got bored. Also, I no longer targeted fish volume, as I became concerned for their mortality. And, I just wanted to learn new things.

But, like a first true love, I never truly forgot Euronymphing. So, when the other angler landed a big brown, I thought it would be a fun challenge to Euro the same spot and apply my own twist.

When I got back to the river, I headed back to that dark-water area. Rather than throw the typical tungsten-anchor-and-dropper set-up, I opted for tiny soft hackles teamed with a split shot. It’s a hybrid approach.

I put the weight above the flies, so that they would drift in parallel. If fish aren’t that active, I’ve found that this is a great way to give them an easy choice. Fussy and well-fed fish usually don’t have to move far for a snack. How about I show them a few flies above their heads and just a single tail swipe away?

Two drifts in, I felt a tap, set the hook, and a massive brown leapt and splashed down hard. The angler below me looked up in surprise. The fish fled down-river and into fast current, but I used the George Daniel fish-fighting technique to ease it above me and afford a more favorable angle. I put rod pressure on it and got it close. When it saw me, though, it surged away and leapt again, and the angler again looked back, mouth agape. It was a real slab of a brown.

I normally would walk down-river in this situation, but I didn’t want to disturb the new angler. The fish fought valiantly and smartly. I eased the fish again above me, and it again took off when it saw me. It again went below me. Suddenly, the fly popped out, the line went slack, and my shoulders slumped.

Rationally, I knew this could happen with a barbless size 20 fly. But, it sucked nonetheless.

At this point, two friendly spin anglers and their dog parked above me, sandwiching me in. After a few desultory casts, I reeled up and walked back to the car. The moment had passed.

Throughout the day, over 11 hours, I went to various spots, dodged other anglers as best I could, and landed browns and a few rainbows, mostly by swinging wet flies. With two rods in hand, I tried to adapt to whatever decent open water I could find: dries, dry-droppers, wet flies, and bobbers. It’s the busy season, and I think being flexible is the best way to ping fish. Going with the flow.

And, it was a gorgeous day. 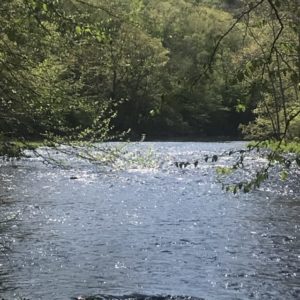 However, all day, and even now, my mind kept going back to that big brown. I mean, how could it not? It was a beast, and I was “so close, yet so far.”

All this means that I’ll be getting up again at 2:30 am on future Saturdays to target the same spot. And, I most definitely will bring a Euro rod.

Hope you all are well….

20 thoughts on “Going with the Flow”