What a day. Good fish. Many bugs. Farmington. Dry flies.

It did not start off well. After hitting the river at dawn and suiting up, I reached into the car to get my Euro rod…and pulled my back.

After gritting my teeth, I moved on. After all, it was 6 am, and the Farmington was beckoning.

I decided to fish because, well, we dropped off another child off for college, and I was feeling a bit low. I saw that the flows have been cut this week, and so, I decided to target some deep runs.

I hit Spot A and was the second guy there. This was in the Permanent TMA section, where C&R and barbless hooks are required. Yes, those fish have PTSD and see many flies.

Euro rig at the ready, my intent was to tightline all day with my trusty T&T Contact 11’3″ #3. Yeah, that back really hurt, though, during the walk and as I readied my nymphs. Ouch.

Thankfully, I was onto a fish right away. It took a black midge larva with blue ribbing (photo here) when it rose at the end of the drift. 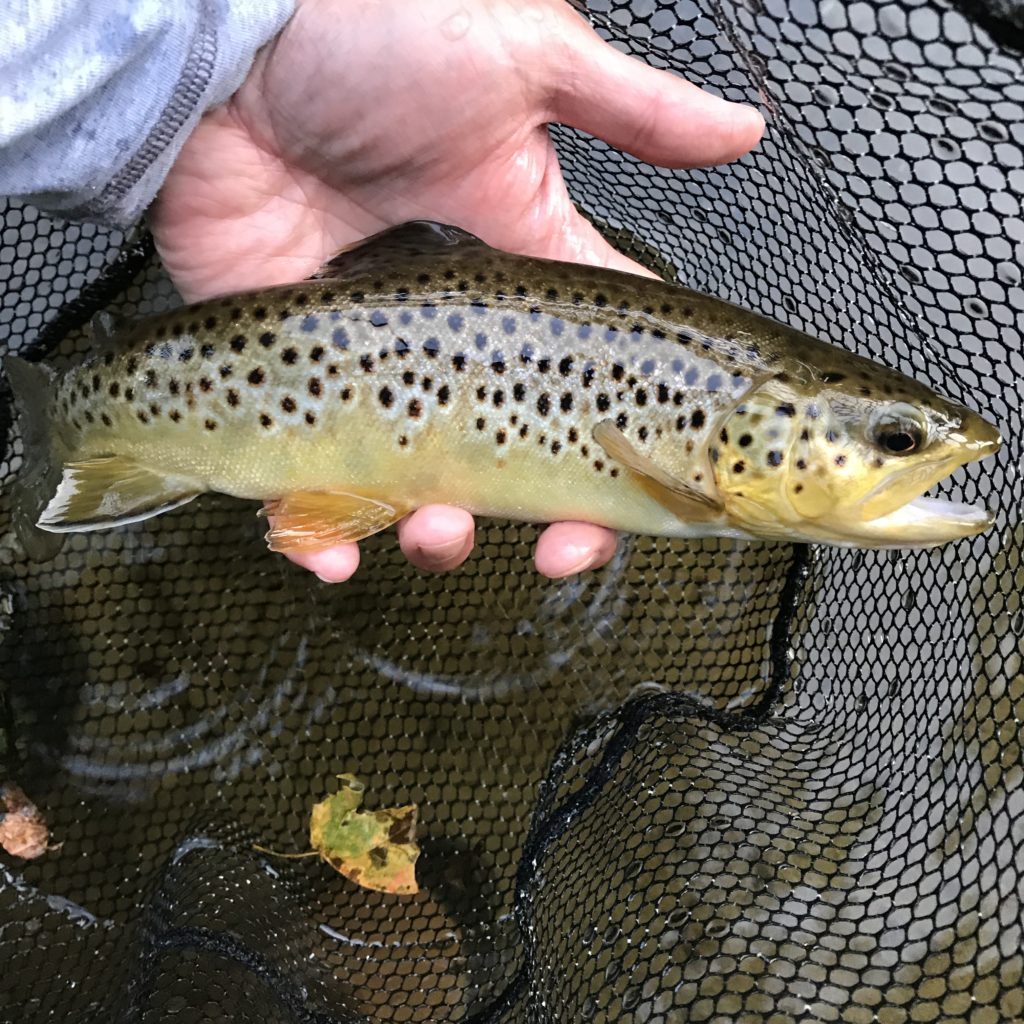 Even better, it looked like a wild fish. It fought more strenuously than most fish its size. And, given that I was skunked at this particular run last time, it was a small victory.

Then, nothing. I mean zip. I tried my new crazy-ass flies and got zero hits. The guy above me left, and I moved up closer to the riffles. A new guy showed up and fished below me. I was determined to land fish at this skunk zone and just rotated flies and tried to execute perfect drifts. Caddis and midges were hatching. How hard could it be?

A bit later, around 8:30 am, fish started rising and porpoising over and over. It became more intense as the minutes passed. Perhaps, a Trico hatch up river was happening.

Unfortunately, I didn’t bring my dry-fly rod, the H2 #4. Yeah, what was I thinking? I thought that with mid-September in the works, the Trico hatch would be waning.

So, I snipped off my nymphs, added a #22 “Big Eye” Parachute Adams and dropped off it a #24 Ed Engle Sunken Trico Spinner. Now, casting dry flies on a Euro rod and rig isn’t ideal. But, thankfully, the Contact does a decent job at it.

Soon, the Adams disappeared, I waited a second and then set the hook. It felt like a good fish. Then, this guy flopped into the net. 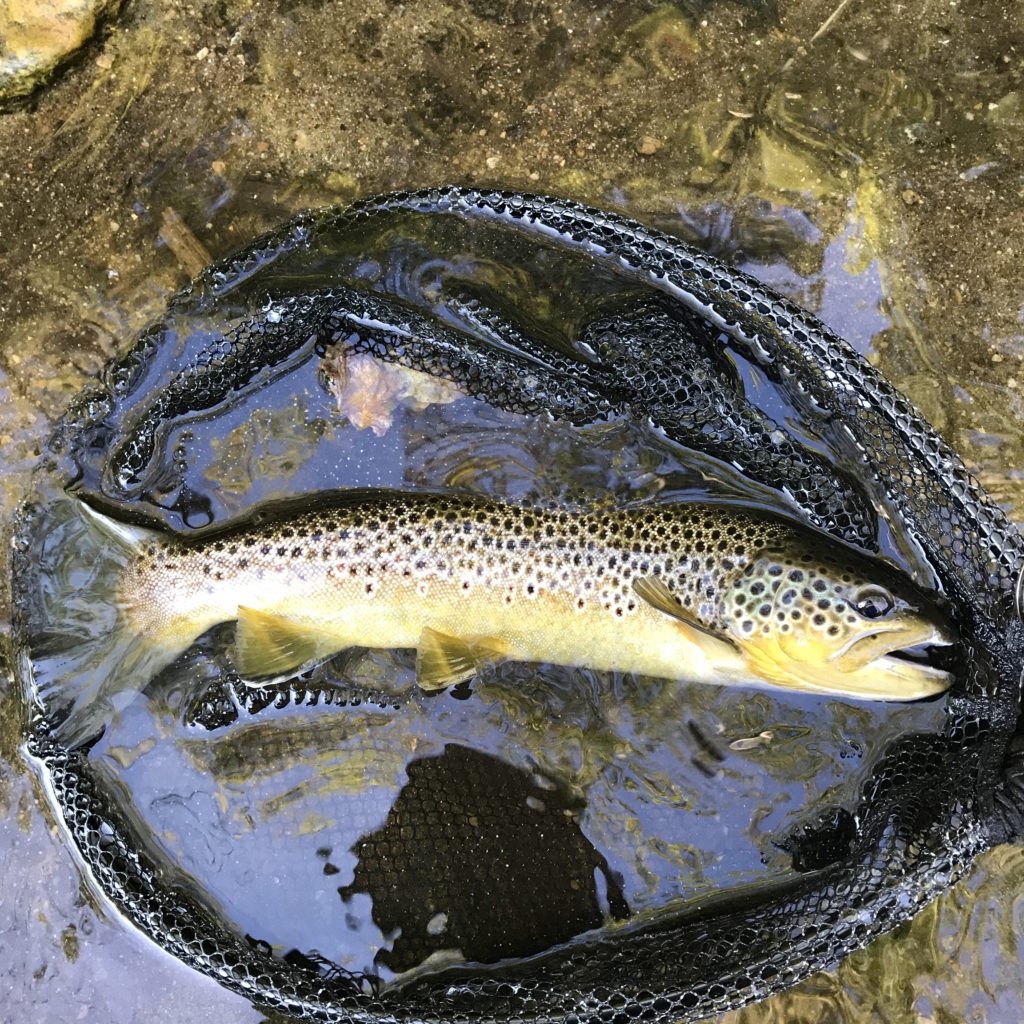 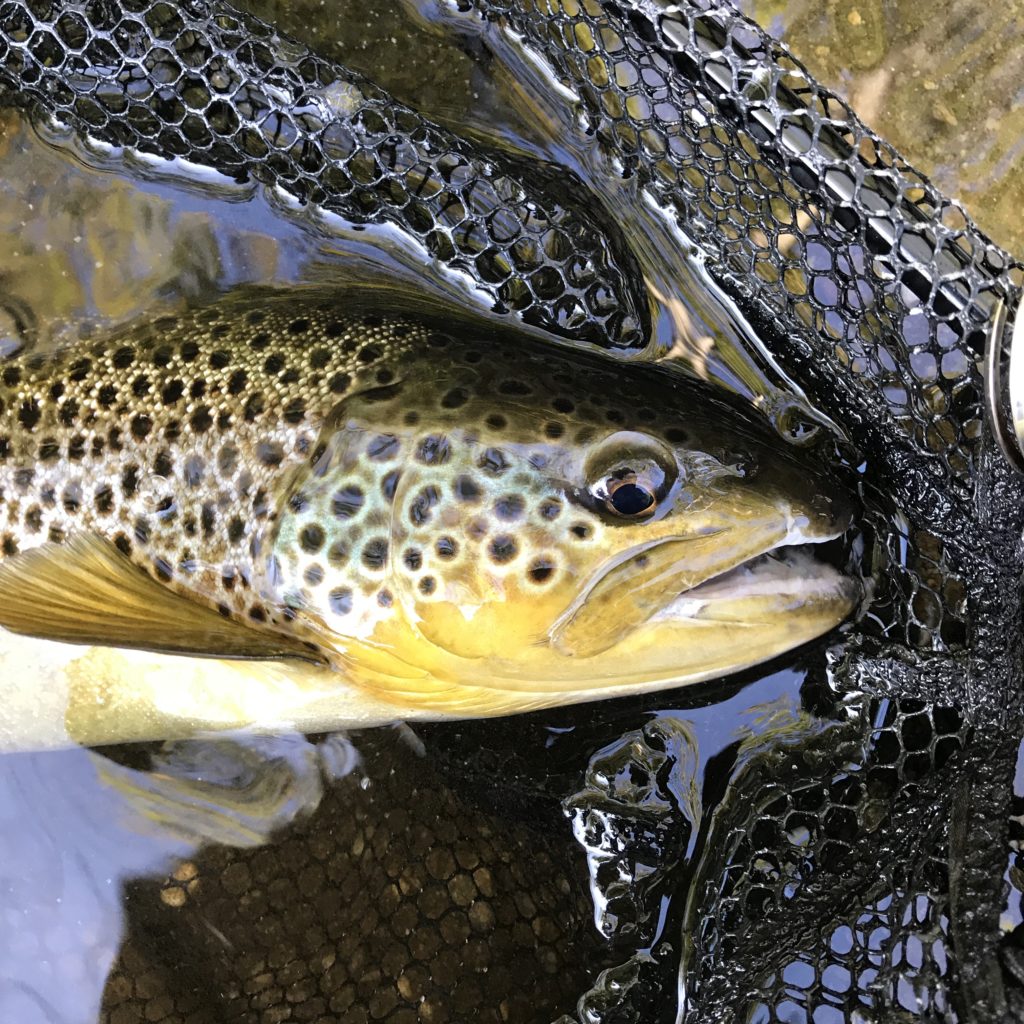 It taped at 16″ and had taken the small Sunken Trico. No elastomers that I could see. Was it wild? I hope so! The guy down river of me shouted an accolade.

“They’re onto spinners,” I mentioned. “Need any? I have plenty.”

Fish kept rising over and over. Then, another take. Then, a really strong pull and a series of surges. With the Euro rig, I had on 5x fluorocarbon. So, I confidently put the wood to the fish to land it quickly. Much side pressure with the fly rod.

Then, this guy flopped into the net. 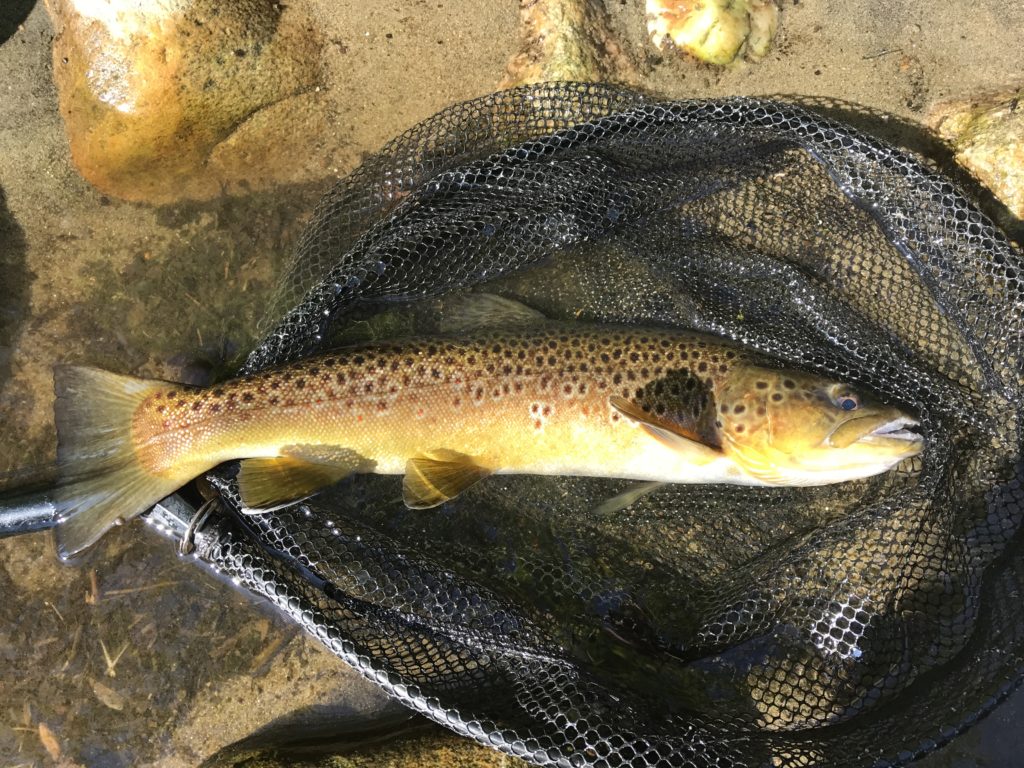 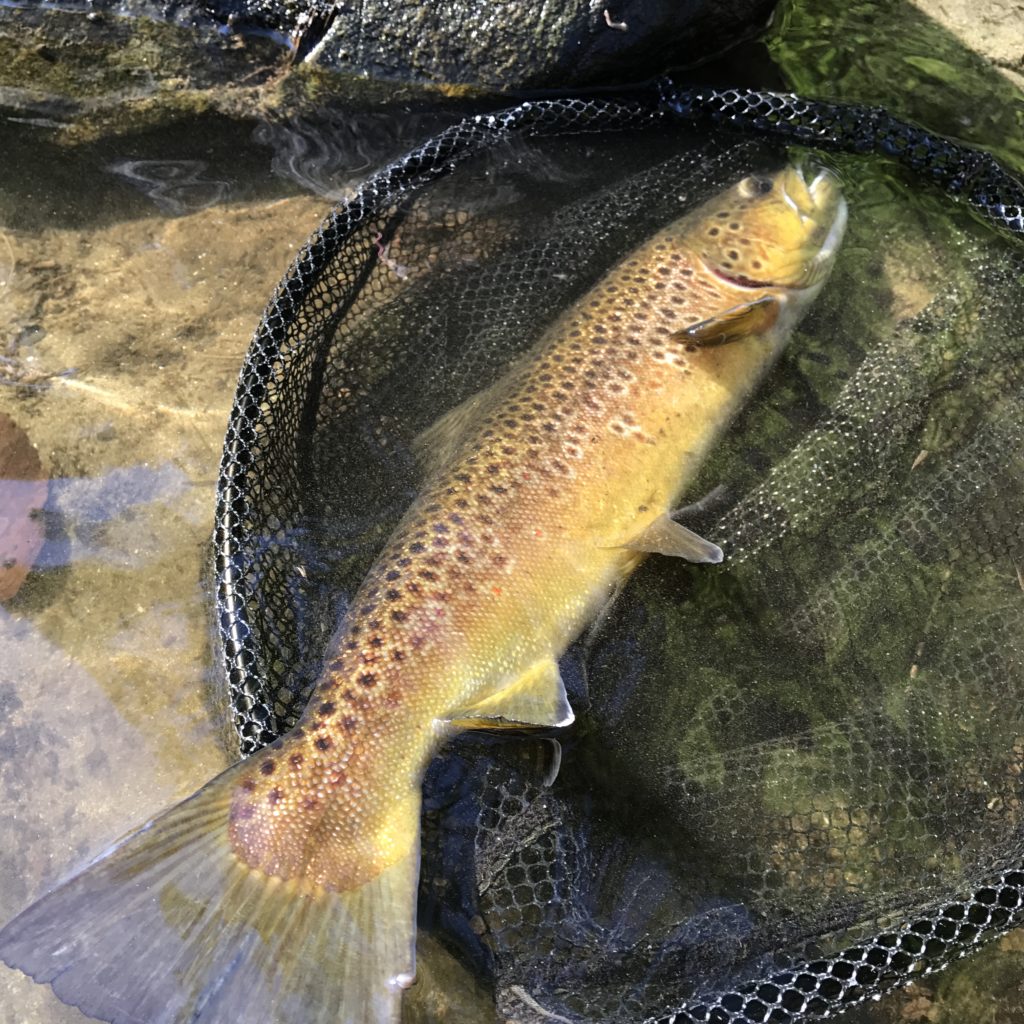 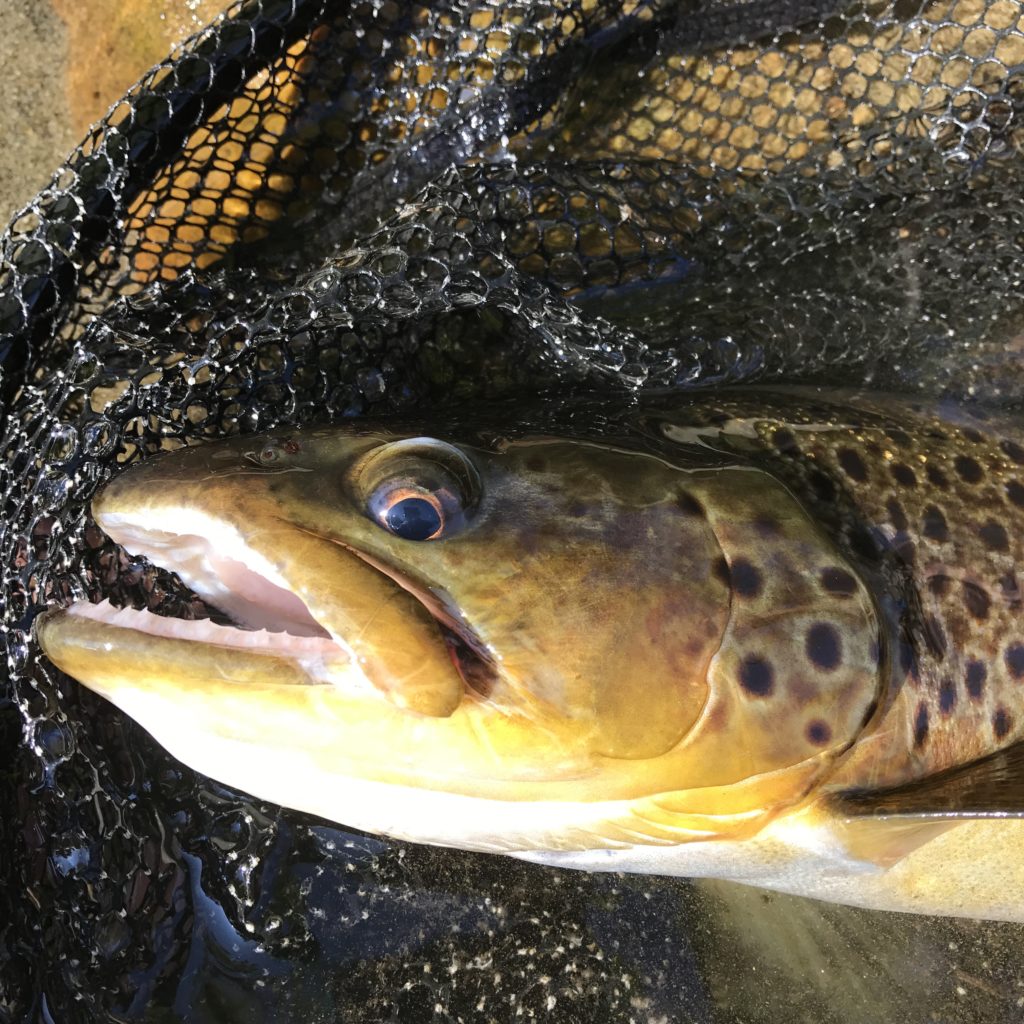 It taped at 18.5″ and had taken the tiny Parachute Adams. No elastomer. Wild?

The guy below me shouted more accolades and came over.

“What did it take? I’ve had zero strikes.”

“A small Adams,” I said. “Do you have any Sunken Trico Spinners?”

He didn’t. I channeled my inner Andy Lyons and gave him my last one and offered twice to give him my spot. “I’ve taken two good fish–why don’t you fish here?”

He took the fly but gentlemanly declined to take my area. Instead, he cast out and hooked a fish.

“First cast!” he yelled. A good rainbow flopped into his net.

Honestly, that felt was almost as good as the 18.5″ fish. I think there is plenty of room at our rivers. And, why not give out flies and yield spots if you’re having a good day? Fly fishing can be very difficult, and many people drive hours and have few days off. Why not share?

The hatch and spinner fall died, and for a while, nothing happened. I then decided to tightline again and targeted some deep and dark water. A take. I mean, a very strong one. Soon, this guy flopped into the net.

A sucker, and it was good-sized. Understand that suckers completely freak me out. I won’t touch them. They give me the creeps. Thankfully, the barbless hook popped off on its own. I think it was about 15″, and I gladly flipped the net to release the fish.

Soon, the other angler waved a friendly goodbye and I had the run to myself. A bit later, there were more rises. And, I saw this. 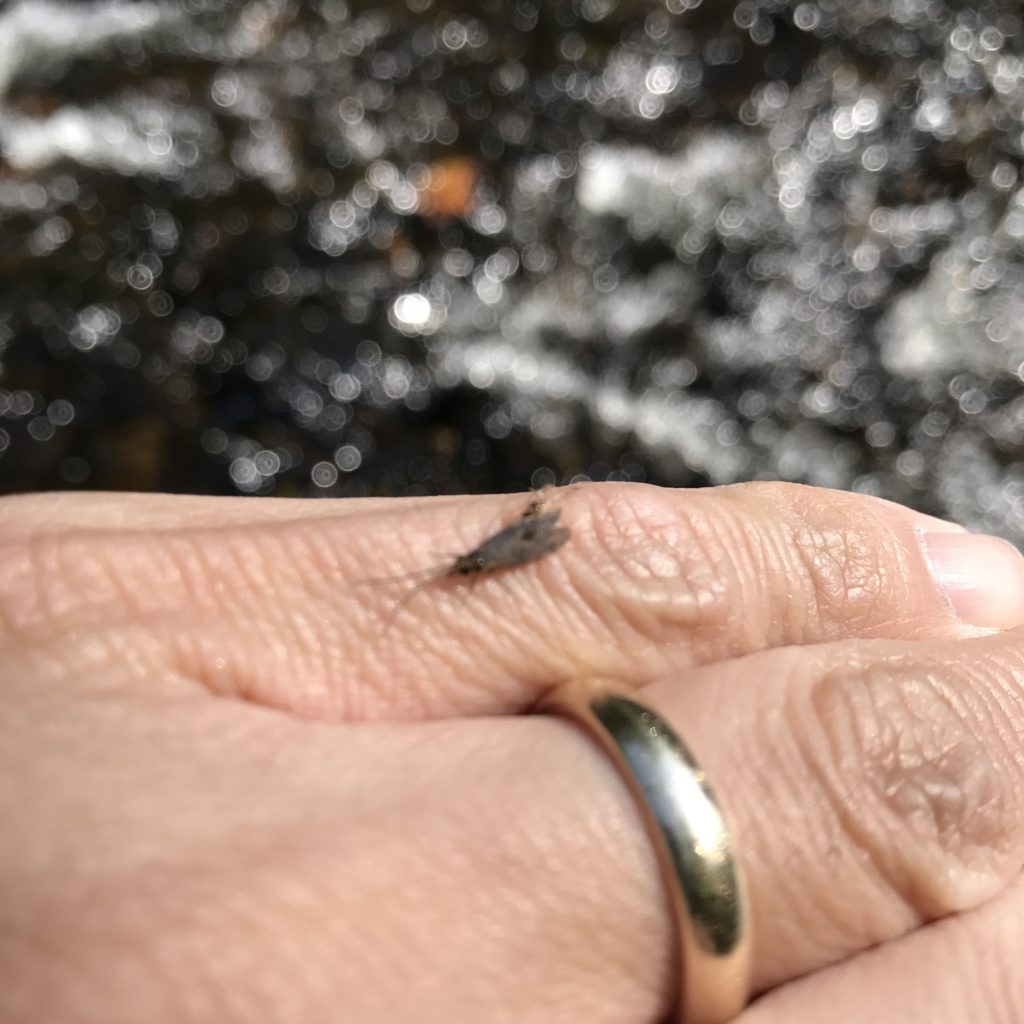 Yes, the famed Farmington Caddis. They were mating and bouncing around the water. So, I switched back to my Euro dry-fly stuff. And, landed more fish. No biggies, but all were decent-sized and fought well.

As more fish came, I decided to experiment and throw some of my other crazy-ass flies. Zero. No takes. No rises. How about big dry flies? Nope. On this day, the best Farmington dry flies were small and subtle. Plain Janes.

After a bit, fish again began to sporadically rise. I guessed that small BWOs were starting to get active and decided to fish the BWO Flashback Emergers I had tied a few months ago. They’re thin and feature some segmentation. I also threw the WD-40.

Both accounted for quite a few fish. In particular, a young brown with youthful dots was a treat to see. 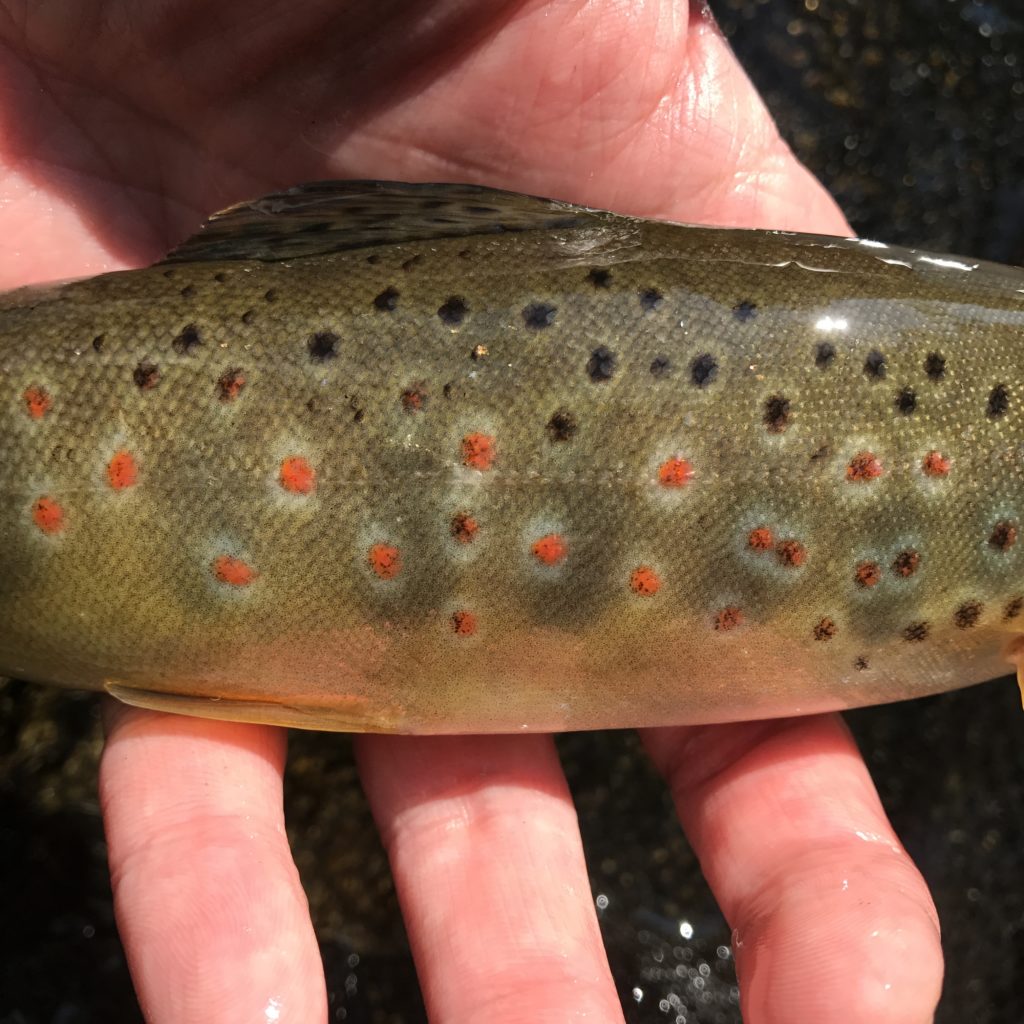 A bit after lunch, I realized that I was having a double-digit outing. It felt good. No, it felt great, particularly as I had very low expectations, and I didn’t expect to land so many on dries with a Euro set-up. Next time, I will bring my dry-fly rod!

So, in the early afternoon, I headed home. At the Farmington, I usually hit three or four spots. Today, it was a single 20-yard stretch. I fished through many hatches: caddis, tricos, midges and BWOs. The best river in New England, IMO, for great hatches and savvy browns. Catching stocked rainbows is very fun. But, to target challenging wild and Survivor Strain browns on dries is a real treat.

What a day. For me, the most gratifying fishing day in 2017 thus far.

15 thoughts on “Big Farmington Browns on Dry Flies and Emergers”