If you’ve ever been to Disney and have been on Mr. Toad’s Wild Ride, you’ll have a feel for how my fishing day went. It was filled with twists and turns and surprises around each bend.

The day started innocently enough, with me awaiting a Trico hatch and spinner fall that didn’t happen. It’s early for Tricos, but they comprise my favorite hatch. I figured it was worth the 3 am wake-up time to chance seeing them.

Unfortunately for me, it was a tough session. Dry flies that killed it four weeks ago, and still managed takes two weeks ago, had looks but no touches today. I did manage to land a nice brown on a #22 Parachute Trico, but I wonder if it was luck. It was the sole fish rising steadily, and it mindlessly gulped down the fly.

I split water with an angler whom I’ve seen over the years. He is an amazing dries-or-die guy who doesn’t even wear waders when he fishes, as he knows which spots are easily accessible from the bank. A few weeks ago, he made three casts and had two fish on.

He appears “old school.” He has an old-fashioned fishing vest, wears white sneakers, and dons what my kids call “Dad Jeans.”  His girth has expanded over the years. And, that guy can fish.

I felt better when he also only landed one before he gave up and left.

Frustrated, I threw wets, which is my desperation technique that usually does well for me. I landed just one fish. After seven hours of constant casting, I only had two in the net. Plus, I was bracketed early by spin anglers wearing neoprene waders on a hot and humid morning.

And, guess what? One of the spin guys absolutely killed it. I was in my modern waders and had nary a fish on the line.

Across the river, a young girl and her Dad were fishing. I could hear them saying to others that they were new anglers. Well, he fell into the river a few times. She stuck to the bank and threw a large spoon. She hauled in two big browns.

Low water and bright sun in August, and you nail fish with big hardware? Truly, today was a weird day.

I decided to take a lunch break as the sun really beat down. It felt good to drive around with the windows open and grab a sandwich.

I moved to a new spot and brought with me a dry-fly rod and a Euronymphing one, uncertain as to what kind of open water I would find. Dries continued to fail me. When the head of the run opened up, I switched to tightlining.

Then, I heard yells and screams.

A family on three kayaks was beached on a riffle. The water was very low. After a lot of commotion and yelling, they started to push with their oars to free themselves. It was excruciatingly slow going for them.

The father was first to extricate, and he looked absolutely exhausted from all the effort as he floated by me. He then jumped into the water to cool down and then beached himself and his kayak. Two teens on a second kayak were next and did the same.

Unfortunately, the mother and a young child were stuck. Chivalry apparently is dead, as the father made no move to help them. When the mother tepidly got out of the kayak in her bare feet and into the white water, I decided to head up to help.

They were really wedged on some rocks, and it took some pushing and pulling to maneuver the kayak. The water was fierce, deep at some spots, and I almost slipped.

Unfortunately, at that point, my net became wedged on some rocks, I heard and felt the net retractor cable snap, and my beloved Frabill net was offered to the river gods. But, I freed the kayak, the mother waved goodbye, and the excitement was over.

I started to tightline. Maybe it was karma, but I couldn’t keep the fish off the flies. In fact, I landed 10 in short order. At certain moments, I had a good fish on every two or three casts. I felt embarrassed when other anglers looked over.

On a hot summer day, when I tightline for pressured fish at shallow water, I  throw small Midges on 6x or 6.5x fluorocarbon with my micro-thin Euronymphing leader.

On such days, my theory is that the larger fish just hunker down. They’ll sip small bugs as they go by, but they probably won’t chase. My guess is that the big fish shift their feeding to night-time. It probably explains why most of the fish I’ve been landing on dries recently have been dinks.

At the run, I teamed unweighted Midge flies with a tiny split shot. I put on the shot higher up on the rig so that the flies would drift level. It’s a trick I learned from George Daniel, and it worked well in the spring when the water was still cold (example here). The goal is to drift flies just above a fish’s head; you show them an easy snack that is a quick tail swipe away.

Since the water was low, I cast from far away for stealth. Thankfully, it all worked out. Some good browns and ‘bows showed up. I felt the takes rather than saw them, and a high-finesse all-mono rig is really good at letting you feel that subtle “tap” on the line.

Patterns in sizes 20 and 22, like my CDC Soft Hackle and The Mighty Midge, did extremely well. A Midge Pupa I tie also did well: brown thread, thin wire for segmentation, and a turn of peacock herl for the thorax.

Below me, an angler appeared. I couldn’t believe it. He was clad in all-purple. He wore purple water shoes, purple shorts, a long-sleeved-and-collared purple shirt, and a purple hat. When he glanced up, I saw that the lenses of his sunglasses were purple, too! I suppose he is a fan of Prince or the Minnesota Vikings?

He was one of the nicest people whom I’ve ever met on a river. We chatted periodically, and he would cheer whenever I had a fish on.

Eventually, the action died down, and I rested the run. Then, I fished again and managed to squeeze out five more trout. This tubby brown really made me work. 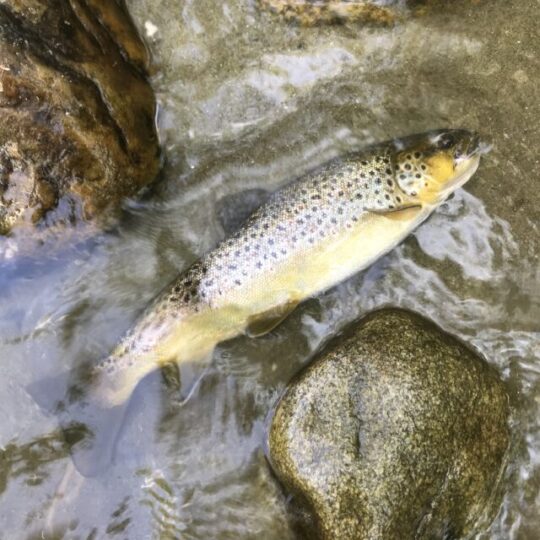 As I didn’t have a net, it was the only fish I photographed. So, I’ll post a pretty fish from my last outing to keep this blog post interesting.

So, a weird day. Here is the scorecard:

Hope you’re having a great weekend. Looking forward to seeing those Tricos!

13 thoughts on “The Wild Ride”