Originally, my plan was to scout some wild trout spots in upstate New York, where I recently relocated. However, with heavy thunderstorms predicted for the afternoon, I couldn’t resist the temptation to target some larger browns.

There is a highly pressured river near me that has an abundance of large brown trout. Due to the pending rain, I slept in an extra half hour and got a slightly later start than usual. Unfortunately, the crowds were out and about despite the impending the forecast. Since I planned to move around quite a bit, I mainly focused on tightlining today.

I started at Spot A, which was a large pool with a fast run at the head. I saw a few anglers working the slower tailout and middle sections, so I proceeded to the top. Within the first 10 or so minutes, I landed one wild brookie but the action died down after.

I saw a few sporadic rises to tan Caddis, but chose to ignore them as I proceeded further upstream. After some time spent cherry picking spots and rotating flies, I landed a pile of fish. Most were smaller, wild browns but I got a few decent brookies and browns mixed in. I lost a brookie around 16″, which was probably my largest from outside Maine.

The best fishing happened in faster, shallower riffles between one to two feet deep, so fighting the larger fish was downright exhilarating. Eventually after a couple hours, I had to answer the call of nature, so I walked back to the access point.

I decided to proceed to Spot B instead of retracing my steps back to where I was fishing earlier. This spot was further up in the river than I have fished. It consisted of shallow, weedy pockets with some nicer runs mixed in.

I found a few smaller wild browns and one lone stocked fish before it started raining. After the first rumble of thunder, I pretty much ran through thigh-deep water to try to get back to my car. I then drove to a nearby fly shop to stock up on tying supplies and dry out.

There, I ran into a former student of mine from my TA-ing days. I hadn’t talked fly fishing with him throughout the entire semester, so it was cool to see him and his father gearing up for a day on the water. If you are reading this, Dan, I hope you and your dad had a great afternoon out there! 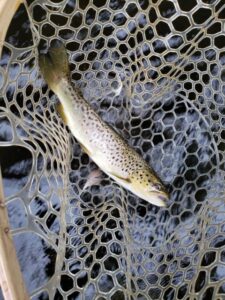 Just as soon as it started raining, it stopped and I decided to proceed to Spot C before heading out. It is a highly pressured spot, particularly with dry fly anglers, but it has some great nymphing runs and very large fish. I had hooked one during my last outing, but it alas came unbuttoned. This time, it was personal.

Unsurprisingly, very few people were out after the deluge, and I had plenty of water all to myself. Since the rain washed some debris into the river and raised flows slightly, I decided to fish the ol’ Mop Fly (a very popular post on ways to fish the Mop is here).

I planned on covering water relatively quickly before heading out, so I planned on triggering an aggressive take rather than deliberately picking apart the water. The plan paid off rather quickly as I caught and released a brown in short order.

However, it soon slowed down, and my attention drifted away. As I was approaching the point of no return, I felt a “tap, tap, tap” and promptly set the hook. The no-look really works! My rod doubled over, and right away I knew it was big. After much side pressure and a few heart-stopping runs, I turned the beast and he slid into my net.

After quickly and quietly admiring this fish in order not to draw attention, I slid him back into the depths. I fished for a few more minutes, but mentally I was checked out.

My day was made, and my hunch had paid off.

7 thoughts on “The No-Look”