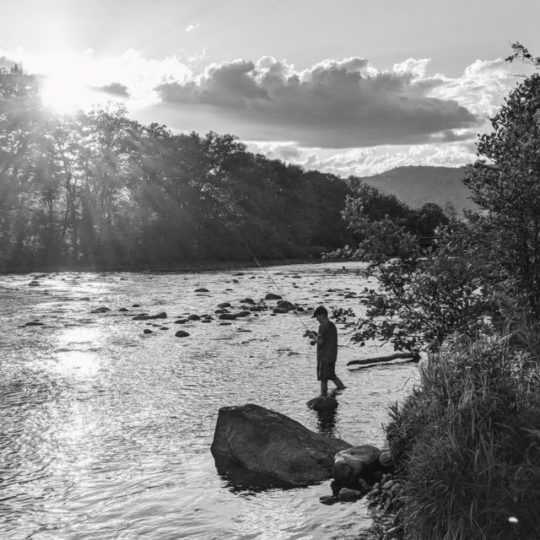 Back in early June word arrived on short notice that MA campgrounds would not be open in June: our reservation at our favorite campground, DCR’s Mohawk Trail State Forest, was cancelled (DCR subsequently re-opened most campgrounds on July 1).  One of my favorite times of the year, and some important one-on-one time fishing with my son were in jeopardy.

We ended up being saved by the hospitality of a friend when Pete Mitchell generously granted permission for us to camp out at his beautiful apple orchard in Hawley, MA.

Perched at the headwaters of Clesson Brook, Pete’s working orchard features tidy rows of lush green trees and a hilltop view.  Indigo Buntings and Bobolinks made us feel welcome as we pitched our tent in a meadow under two huge pines.  Deep woods flanked the meadow and provided cover to deer and their fawns, which would emerge in the evenings and eye us warily. 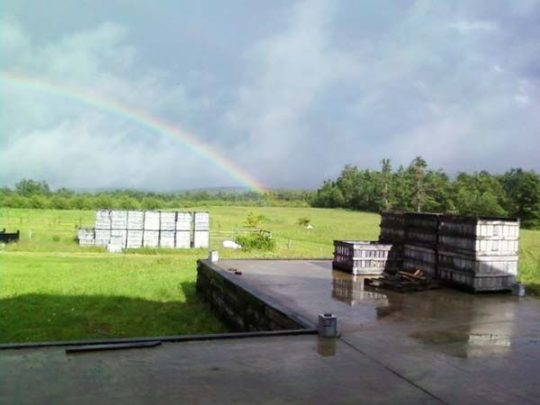 With our base camp established, we fell into a rhythm of  driving down one side of the mountain or the other and seeking out trout in a variety of streams and rivers, sometimes with success.  We fished earnestly, eager to check some of our favorite spots and discover a few new ones.

One afternoon we explored a small stream that was new to us.  Online scouting before the trip had shown that a single house comprised the entirety of human disturbance in the watershed giving birth to that stream.

It didn’t take long to prove that wild brook trout could be found; although they were mostly small they were present in amazing density.  Working upstream, we found a nice pool crossed by two fallen trees, one of which was under water and provided a scour hole any brookie would be proud to call home. 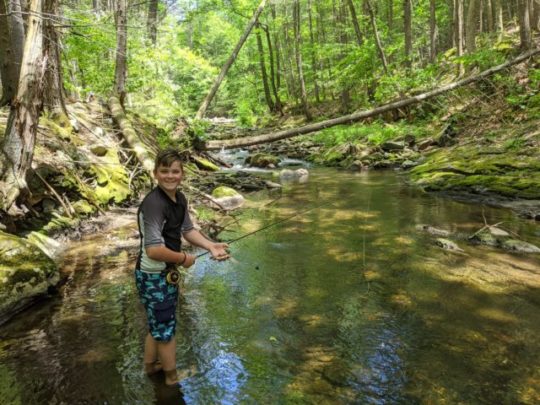 Except we did not find one brookie in that hole.  We found dozens.  At one point, I counted 17 brook trout that I could see at one time.  I watched them finning in the water as clearly as if they were floating in air.

The amazing thing about small streams is that, when considered in relative terms, they are equally as productive, exciting, and wondrous as the blue ribbon trout streams that serve as the backdrop for the Instagram trophies.   Our stream and our catches that day were a miniature version of the best trout rivers I have ever fished.  With the right frame of mind, the only thing not minified is the experience. 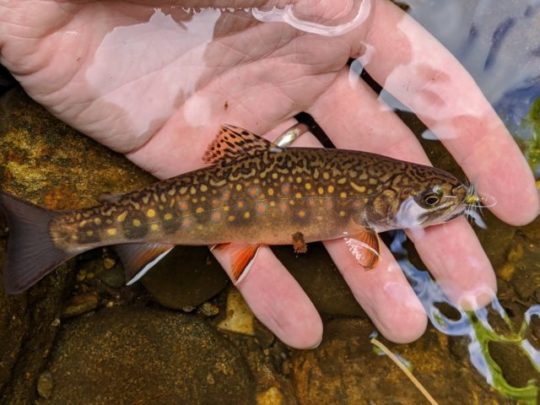 At one of our favorite brook trout streams, we each found some willing brookies.  This is one of the more productive streams we have found in the Deerfield watershed, and we landed a nice double from a deep run. 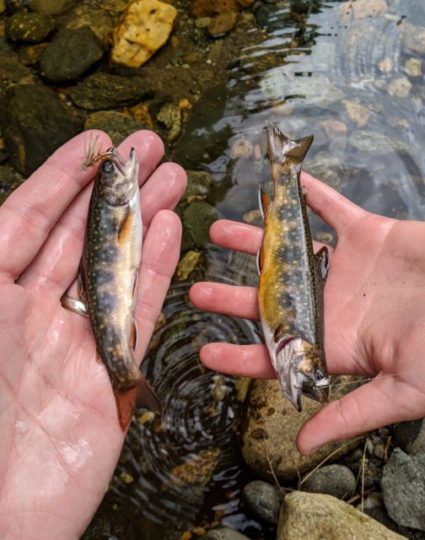 After taking a few more brook trout, Wynn spied a salamander on the bottom in the slower side eddy at the top of the run.  While he missed catching that one, he stirred up the sediment in his attempt, and we watched several black nosed dace dash in to feed in the silty plume.  With our noses near the water surface, the dace looked huge.  Even when we backed up, we could tell that there were a few “trophy” dace, if such a thing existed.

I rummaged through my small stream fly pack and found one tiny size 24 nymph.  Wynn stirred the bottom up, and a handful of dace returned.  I was challenged to get the correct “drift’ as the fly was very slow to sink.  It had to be carried by the current to a certain spot.

On the fourth cast, I got a take and landed a solid dace before we switched and Wynn took a turn.  The fish were not pushovers.  I believe that honing his skills on small streams and having a close attention to detail gives Wynn some real advantages when he turns his sights to bigger quarry in bigger rivers, and his catches bear that out. 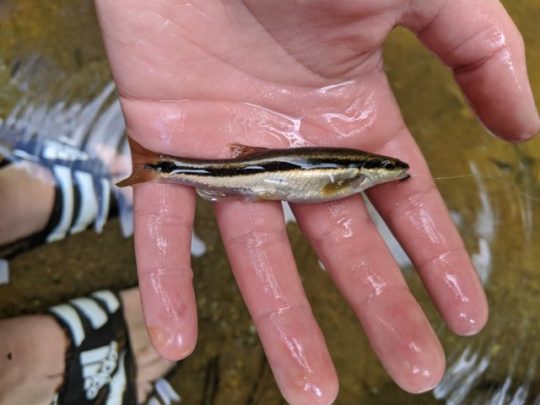 After a few days, my wife and daughter joined us, and the tempo of the fishing shifted.  We would roll out at a spot, take a few casts, and then bathe in the deeper pools, catch aquatic insects, look for rocks to collect, read a book, or sunbathe.  At a few spots we would do all of those things once or twice over.

Sometimes one of us would strike off with a rod on a jaunt upstream or down to prospect for fish with a fly.  It was something I would never do on my own.  Left to my own devices, I think I would always “just fish.”  But, it was a great way to spend an afternoon, and we would still have plenty of time to try to hit an evening hatch on the Deerfield. 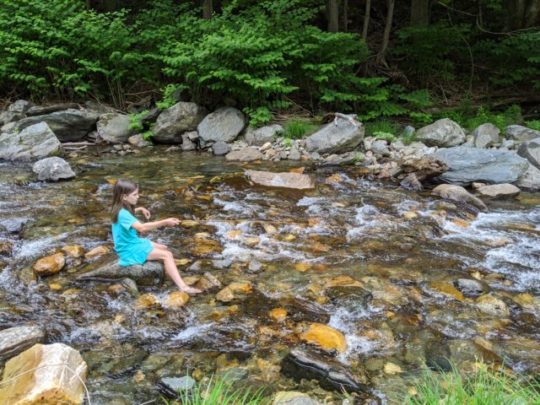 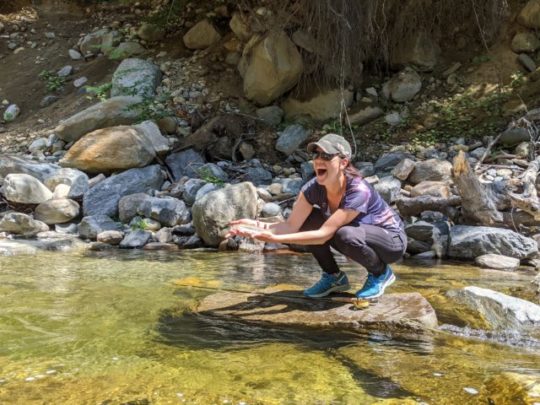 Pete, generous as always, left some Headwater Cider from his orchard for us to sample.  The kids were disappointed to find out that it contained alcohol.  The adults found that the crisp, dry cider was not too sweet and meshed with the vacation vibe when enjoyed as a breakfast aperitif paired with the view.

Keep an eye out as his gold medal winning Headwater Cider is available in plenty of MA stores. 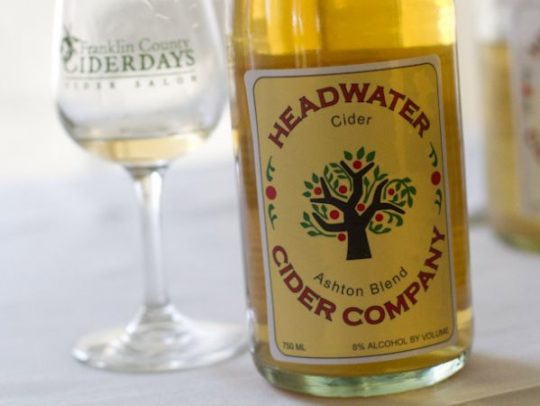 Our favorite variety was “Hey 19,” which Pete bottled in 2019 after hearing the Steely Dan song on the radio.  To us it felt like a rebellion against the Covid-19 virus causing the pandemic.

Hey 19: you cancelled our reservations, you cancelled a lot of fun things, you’ve kept us cooped up, made us miss school, taken some of our loved ones and caused a lot of disruption. But, we’re still marching on, and we found some time to just be together and enjoy what we have around us. 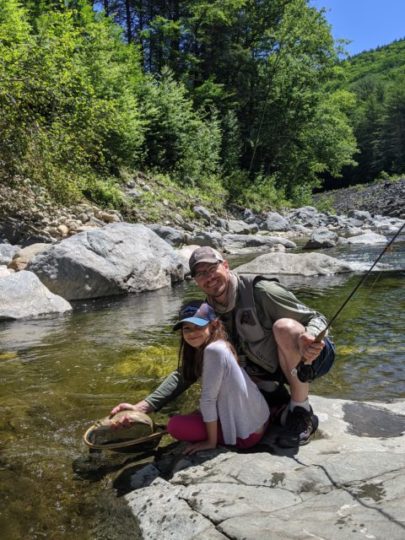 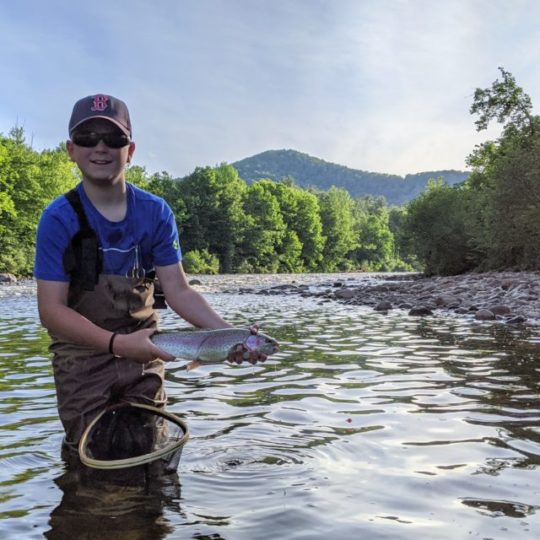 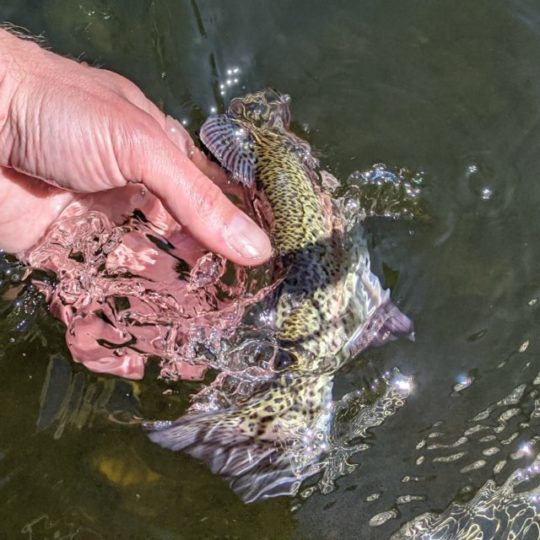