I eased out of our driveway at 3 am, eager for a dries-or-die day. With flows lower and the sun really popping on some days, I had hoped to enjoy one of those epic fly-fishing outings.

I packed two dry-fly rods, my Sage #000 and the Orvis H2 #4. I also brought with me my Thomas and Thomas Contact tightlining rod “just in case.” Little did I know that I would need desperately all three for the flies that were still rigged up on them.

After parking at a dirt lot, I opened the trunk and had to laugh. I had forgotten my chest pack. Laughing was better than crying, anyways, and I texted the Mrs. in ignominy.

“This will be an adventure,” I thought.

It had a good number of anchor flies for Euro rigs, but had no droppers and just three dry flies, big and gaudy store-bought ones purchased a few decades ago in a classic rookie move of buying flies that looked good to the angler but not to the trout.

As a chronic over tier, moreover, I no longer add much to the annex box. I did have some money patterns in there, but most of it was filled with meh patterns that didn’t produce and never got promoted to the varsity fly box.

But, these Tier C flies were all that I had. So, it was an outing without most of my 2020 confidence flies. I was particularly irked that I didn’t have any dropper flies, midge patterns, or my go-to dries. But, what can you do, but make do with a Plan B?

So, I geared up. In my gear bag, I found some essentials: a nearly-empty bottle of desiccant, Mucilin, some fluorocarbon tippet, an old pair of scissors, and “old school” Thingamabobbers back when they were all the rage 15 years ago. No net, though, as that was attached to my chest pack.

With my mishmash of gear and a sorry collection of flies, I headed to some calm water to throw dries.

I waded around in the fog, creeping around for signs of feeding trout. I found a few risers and rotated through the large dries, finding no takers. Fortunately, my #4 had on it still a Mole Fly, that pattern from Charlie Craven that did so well for me last time (post here).

At long last, a fish took, I set the hook…and, promptly busted the 7x in my shock and glee. The tippet had a pig tail at the end, meaning the knot had undone. To be fair to myself, I had landed quite a few good fish on that fly the last time out. But, to be harsh with myself, I should have tested the old knot before casting. Another lesson learned.

After fiddling with more big dries, I switched to a dry-dropper set-up. One of the benefits of big dries is that they float well, and I thought I’d leverage what I had. I put on a small Sexy Walt’s and promptly had a take…and, I busted off that fish, too.

The day was not looking great.

I then went back to the car to regroup and decided to tightline. After all, I had some anchor flies, and the Contact still had on it the one soft hackle I had in my possession, the Mighty Midge. For some reason, it was a defective fly the last time out, when I bounced quite a few fish on it. The fly looked fine, but fish were able to spit it out for reasons that only the fly-tying deities know.

I tightlined a run. And, promptly bounced three fish in a row. At least that fly was consistent!

I had made sure to do crisp hook sets that normally are money, but the fly had other ideas, like a teen eager to do the opposite of what parents advise (I’m a Dad; I can write stuff like that). I normally would have clipped off the pattern and condemned it to the netherworld with words of vitriol. But, it was the only dropper I had, and it stayed on. I was a beggar and not a chooser at that point.

I then started to think about statistics. There’s always a normal distribution with everything. You, on average, can have really good days of fishing throughout your life. Some days are truly great. And, some will be truly awful. The average may still be very good, but you’re going to have some dispersion of results, and you should expect some days when the ducks just aren’t lining up.

This was one of those awful days when nothing was going right. But, I perked up, as I felt that things, as statisticians would say, would “revert to the mean.” I mean, other than falling into the water, breaking a fly rod, or a getting flat tire, how much worse could the day go?

Eventually, I started to land fish, including some really good ones. But, since I didn’t have a net, I didn’t have any photo opportunities that were safe for the fish. The Red Dart and touch-dub style Sexy Walt’s nymphs did particularly well, as usual.

Then, luck struck. Caddis started to hatch. I found the one Caddis pattern I had, an experimental winged-wet version. I sacrificed some of my meager Frog’s Fanny and tied a small Sexy Walt’s below it. It was time to do the Euro dry-dropper, that favorite technique of mine from a few summers back.

I dabbed the flies up and down while at some shallow and bubbly water, and the set-up just cleaned up. I mean, it was both fun and shocking to see how many fish had slid into a small-ish grid of water to feed. I was learning that Plan B wasn’t so bad after all. I was regressing to the mean and on the road to recovery.

Eventually, the hatch died down, and I went back to Euronymphing. Whenever the bow in the sighter changed its angle, I set the hook. Often, there was a writhing fish at the other end. Takes were very subtle.

Soon, the fish were in a mid-day lull, and I was, too. Nothing was happening, the sun was really beating down, and it was extremely bright.

So, it was off to get lunch and to stop by UpCountry to buy flies and desiccant. It was great to see the shop open again and to chat with Torrey and Wade. And, they had in stock some go-to dries for me: a small CDC Caddis pattern, the Mole Fly, and some CDC BWO flies.

I went back to the river at 2 pm to scout some new dry-fly water and to cool down. It felt a lot like July out there, and wading in the cold river was a welcome respite. Eventually, fish started to rise and I, at last, was on my dries-or-die mission.

Three young adults staked a spot below me. They were throwing big lures on spin tackle and landed some good fish. They had a lot of energy and laughed a great deal. They were loud and gleeful when they landed a fish, which was great to hear and see, but then crashed and lay down on the bank. Then, later, two of them started to fight loudly, with f-bombs galore.

A couple across the bank showed up, with their dog and folding lawn chairs. When the rises started, they geared up and started to fish. A couple’s date night out. I’m going to propose that to the Mrs.

And, eventually, the dry-fly fishing was great.

The further the sun went down on the horizon, the longer the shadows grew along the bank. And, the more fish started to rise. Some eagerly chased egg-laying Caddis, but most leisurely ate something small just under the surface. Sometimes you’d see a dorsal fin and, afterwards, the tail wiggle of a happy trout going back under. But, mostly you saw some surface disturbance and not much else.

I saw some good fish, but, without a net, just let them go without a photo. I did see a small guy, though. A sign of hope during these difficult times. 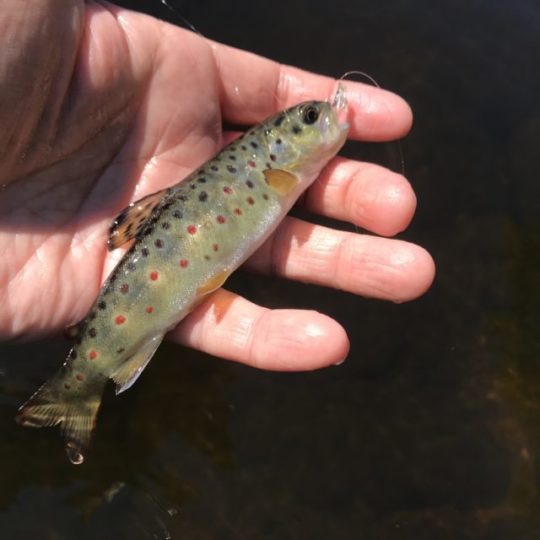 And, just like that, five hours went by. I couldn’t believe it! It’s amazing how mesmerizing it was to throw dries to rising fish. It felt like just an hour. I almost never fish the evening hatch, as I’m usually on the road to be back in time for family dinner.

But, this time, I hoped to ask for forgiveness, and, the family was cool with it. 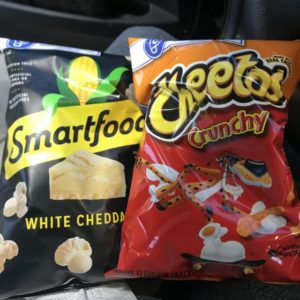 In the end, it was 14 hours of fishing. I had left the house at 3 am and returned at 10 pm. The road to recovery was long and so worth it. Dinner was some bananas I had brought with me and some salty snacks I picked up while getting gas.

And, when I pulled into the garage, there was my chest pack on a hook, ready to be taken out for the next outing.

Maybe, I’ll leave it at home instead?