Here’s another guest post from blog reader Robert Christmann. We are always looking for contributions from the broader community.

I have discovered what’s the hardest thing to do on earth.

It’s trying to peer through a head net while fumbling to tie on a #20 Griffith’s Gnat with a swarm of mosquitoes so thick surrounding your fingers that it is hard to distinguish which one is your fly, and, while out in the lake in front of you dozens of large fish are rising so violently it sounds like someone is throwing bowling balls into the water.

“Riseforms” held no meaning here. I have never seen mosquitoes so thick or fish rise so violently, but this was the situation I faced. My nerves were rapidly unraveling. 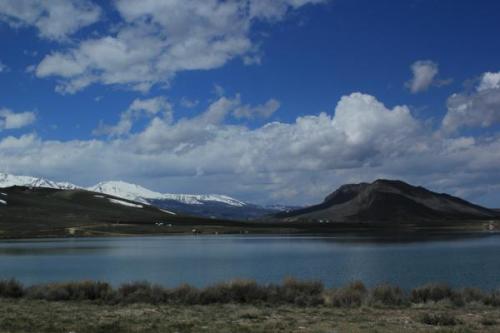 This was how I found myself at 10 am on one July day at South Delaney Butte Lake in Walden, Colorado. The nutrient rich lakes there produce an abundance of insect life which in turn supports many large, fat trout. There are actually three lakes in the management area, with South Delaney being the main attraction.

There was a super hatch going on and a veritable feeding frenzy. You name it it was hatching. Midges, Damselflies, Callibaetis, Mayflies, floating spinners, etc….. And, I just happened to be there when it was going on. In the immortal words of Dirty Harry, I “felt lucky” that day. Maybe this was normal for this lake in the summer, but I don’t know as I had only fished it a few times.

When I first got there, I stepped out of my truck and was instantly engulfed by a horde of mosquitoes. I had to get back into the truck just to gear up and drown myself with Deet. I had heard that the mosquitoes were usually bad there, so fortunately I had brought my head net. But, this was insane. When I emerged from the safety of my truck, I was swarmed with every one of them trying to find the one spot I missed. Without a head net, it was hard to even breath in without inhaling mosquitoes.

The Griffith’s Gnat is one of my go-to flies when midges are hatching. Simple but effective with nothing more than a few wraps of herl and hackle. Easiest of all to tie. Don’t know who created it. Undoubtedly someone named Gnat.

Guys will float from one end of the lake to the other in tubes and small boats while utilizing the wind to carry them along. All I had with me were my two legs, so I waded out as far as I could to reach the risers.

There were rises all over the place, so I cast around hoping something would pick my fly out, but I was not succeeding. There were so many flies on the surface, it was like a coating of scum. I wasn’t sure my fakes would elicit any strikes with the smorgasbord they had.

At one point, I noticed a fish making a series of five successive rises in a straight line. I cast out in front of the formed line, but it didn’t take.

A huge boil appeared about 40 feet out from me, so I cast to it and let the fly sit. No way could I see the fly but knew about where it landed. Soon, a large fish rose near where my fly sat, I hauled back, and had a good one on. Why it took my fly over all the naturals there, I’ll never know. It must have been my amazingly brilliant lifelike tie that did it.

Line screamed from my reel as the trout made five runs up and down the lake. At one point, it came racing straight back towards me, and I had to strip line in as fast as I could, something that doesn’t always happen on a river. I could see it was a beautiful rainbow near the clear, weed covered bottom.

Some guys in a boat stopped to watch my battle. I’d better not blow it now, I’m on center stage.

I finally got it in. It was a fantastically colored 18” rainbow, not that big for this lake. But what was impressive was it’s height: five inches from its back to the bottom of belly its from a quick measurement. It was like a football and super heavy. The fattest fish for that length I’ve ever caught. It had obviously been gorging itself for years on all this insect life.

Fish continued to rise all around. I’d never seen anything like in my life. Eventually, a wind came up, and all the rising stopped. This was the only one I was able to take that day, but it was enough to get me my fix. It was the kind of experience you dream about but rarely seem to encounter.

8 thoughts on “Robert Christmann: A Fun Day With Mosquitoes”

Have it but have never used it. Fearing that light