At the Salmon River (post here), I noticed that my Thomas and Thomas Contact #6 did a great job at indicator nymphing. It is a deft fly rod. I don’t enjoy chucking bobbers, but the Contact added both power and finesse and was a joy to cast. So, I brought it to the Farmington today.

I arrived at dawn and started with articulated streamers and my Orvis H3D #7. The water was 36 °F, meaning that throwing meat was a low-probability scenario.

2020 is my year to make and throw big streamers. I learn a technique by forcing it and believe that dues-paying is part of the game. You commit to it. It’s how I learned to dupe Swift River fish on 8x with #30 dries. And, wet flies last year. And, Euronymphing when I fish started to fish regularly.

So, it was a streamer morning for me.

I started off targeting some winter lies where I’ve caught big fish in the past. After a few hours, a sore shoulder, trying various retrieves, and zero hits, I went back to the car to swap rods.

I returned to a fishy stretch with my Contact rod. It’s an area in plain sight, and I’ve never seen an angler work it. The promising area is only about 10 yards long, but, my gosh, does it look fishy: soft water that yields into a very deep but compact run.

Streamers didn’t work earlier, and I thought nymphing it was worth a shot. Soon, the rod bent, and I felt both excited and relieved.

The fish fought hard. I’m always impressed with the Farmington browns. Pound for pound, they fight. The Swift River rainbow stockies can be powerful. But, the Farmington fish are in a different league, honestly.

After a good work-out for the six-weight rod, a nice brown, replete with red spots, showed itself. A small egg pattern did its job.

After some more casts, I felt the urge to move to Spot B. At least, the skunk was off, meaning the rest of the day felt like upside to me.

With the air temp. rising, I felt it was worth a shot to throw wets. After working one area pretty thoroughly and getting skunked, I chucked some streamers. When that failed to produce, I put back on a bobber and targeted some bubbly water.

Maybe it was luck, but I soon landed five fish on a Caddis Pupa pattern. They were holding in shallow-and-slack water right next to a major current. I’ve fished that area oodles of times, but have never seen so many fish there, even in the prime months of spring and early-summer. Trout are such a mystery!

The most interesting fish had a bent vertebrae. It’s tough to see it in the photos, but it’s either a genetic deformity or an old injury. It swam away deftly when I released it, and so, I’m hoping it can make it through the lean winter.

Soon, it was 1 pm, and the wind really started to gust. The other anglers all left. I gutted it out for a bit. But, repeated wind knots and tangles made me realize that it was time to head out. 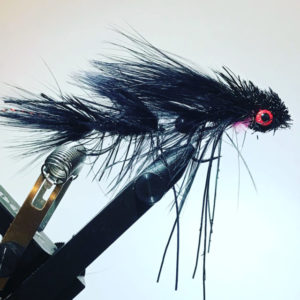 I swung by UpCountry to pick up some materials for a new articulated streamer. I then went next door to devour a delicious Reuben sandwich at Better Half Bistro while I contemplated a lot of gratitude.

I had not been to the Farmington in about seven weeks (the steelhead trip, a busy work schedule, the holidays, etc.), and it felt great to be back.

My streamers were blanked today. Their day will come again, though. These articulated bugs did well for me in the fall (posts here, here, and here), and I’m loading up for my February trip for big browns at Arkansas’s White River.

I hope you’re all having a great weekend. Am watching the BAL vs. TEN game as I write this. Anybody but the Ravens to win the Super Bowl, IMO. Anybody.