I made my first trip of the decade to the Swift on Saturday. Since the area below Route 9 reverted to catch-and-keep, I focused on the fly-fishing only area.

There were a few cars at the lot at 9:00, but the rain kept the usual crowds at bay. I find that fish bite better during inclement weather, especially during the winter. I’m also a bit of a die-hard. I planned to follow up my last trip by throwing some more “crazy” patterns, and I was excited to throw some new flies.

The first few spots I fished failed to produce. Although I got a few looks, I felt my larger anchor flies spooked fish, and I had several outright refusals. An hour or so later, I gave in and decided to downsize my offerings. It didn’t take long before I had my first take. After a strong fight and tense moments, I had my first fish of 2020 in the net. A nice ‘bow. 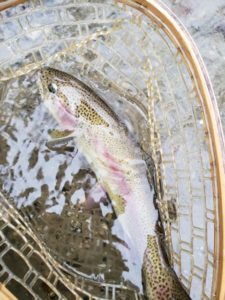 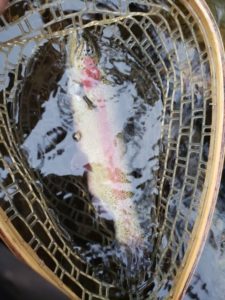 Over the next few hours, the bite turned on, and I landed a mix of rainbows and brookies. The top producer for me was a size 22 Rainbow Scud, but small midges and soft hackles also worked. Eventually, the rain got to me, and I decided to work my way back to my car.

On my way back to the car, I talked to a guy who was relatively new to fly fishing. He felt somewhat discouraged from getting refusals, so I gave him some advice and a couple flies. I ended my day swinging soft hackles at a couple spots, but to no avail, unfortunately. Still, I felt content and glad to get a great day on the river.