Embarking on a new fly-fishing technique (in my case, making and throwing articulated streamers) is an exciting time. I read a lot and watch many videos. I consult with friends. The fly-fishing world again feels new and filled with wonderment.

For each technique, there are definite domain experts. In the case of articulated streamers, Kelly Galloup is one of those at the summit.

I’ve watched many of his tying videos. They’re long. A single video can be over one hour. That is because he gives a very thorough explanation of a streamer, including the design logic behind it.

The Peanut Envy is compelling: fish it with a floating line and jig it up and down. Galloup says the pattern is one of his favorites for big fish (video here).

So, I recently tied one up in black and added a few strike triggers to give it my own spin. Packed in the sling pack, I today arrived at dawn at the Farmington. The air was 19 °F, and water clocked in at 40 °F. It was painfully cold.

So, why not throw low-percentage big streamers all day?

At one area, a guy below me was fishing bait. He caught a few good-sized fish and a lot of small ones. Every time he hooked up, he looked upstream towards me. I don’t know whether he was looking for adulation or an audience or both. After a while, I just gave him the clandestine eye roll.

Thankfully, I was upstream of him. When someone above you fishes with bait, fish will smell it and head up. So, I was glad to keep a distance.

I’d been throwing lightly-weighted streamers with a polyleader to no success and decided to mix it up. So, I took off the polyleader, added a 0x leader, and tied on the Peanut Envy.

I knew right away that it was a good fish. It was below me, however, which sometimes results in unbuttoning. So, I pointed the rod downstream and edged carefully towards the shallow water before going below the fish. Then, I pointed the rod upstream and reeled in. The seven-weight made for a short fight, and I’m fine with that. It’s better for the fish.

And, what a fish it was.

This buck taped at 16″ but fought a lot harder than its size would suggest. I turned my back to the bait angler, as I didn’t want him to see such a beautiful specimen. The last thing I would want to see is him edging up towards my spot and slinging his grubs. Yes, I was feeling petty.

But, it really was a stunning fish.

When I looked up, the bait angler periodically would look over and see what I was doing. I surreptitiously released the fish and felt very happy to see such a nice brown.

At that point, it was only 10:30 am, but I knew I was pretty much done. One of the CT DEEP biologists says that a trout dies after being caught a half-dozen times. I don’t know if that is cumulative or within a finite period of time, and I mean to find out. 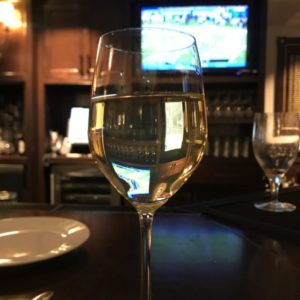 So, I’m fine with one fish on an articulated streamer. When I started fly fishing, I targeted stockies and was a high-volume guy. It felt great to land fish. Now, I’m more particular, I guess.

I reeled up and went to less-promising waters to scout. I didn’t get any takes, but was happy to take some long drives and walks to check out some new water.

It was time to drive back.

When I was close to home, I grabbed a snack at a favorite spot: wood-fired roasted meatballs, a salad, and a glass of White Burgundy. Why wouldn’t you? I was feeling very happy.

As I walked to the car, the first snowfall of the winter had arrived. A magical moment.

All is well. One very nice fish. We are nearing 1,000 followers on Instagram. I post photos there that I don’t publish on the blog, and so, you may want to check us out here.

And, now, I’m blogging and watching the Patriots game. This is shaping to be a tight game. I hope you’re all having a great weekend….