Steelhead fishing is everything they say it is. It is cold, mentally and physically challenging, and redolent with glimpses of bedlam when a fish is on. And, it is absolutely and downright addicting for the fishing demented. 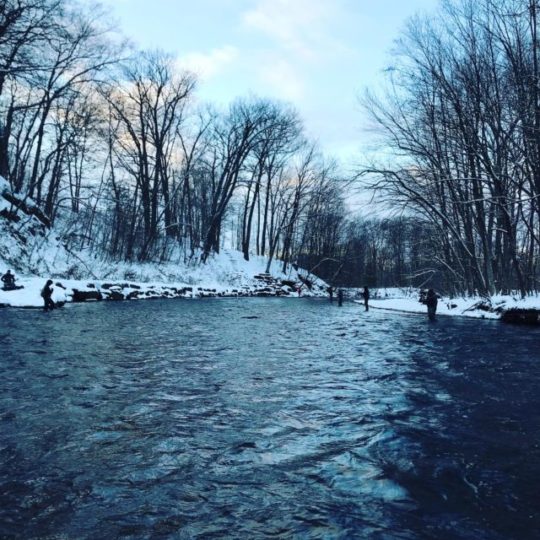 I took a few days off for my second-ever trip to the Salmon River in NY. I’ve seen all sorts of weather, from snow to sleet to rain. I’ve met many great folks and the occasional grump. The weather has been everything from 7 °F with the wind to a “balmy” 33 °F.

But, boy, did I have to work hard for them. I got up each day at 4 am to make a PB&J, stretch my old-man back, and catch up on work. I then headed to the river with a headlight, back pack, a portable chair, and all of my fishing gear.

Then, I waited in the dark and cold. You cannot start fishing until 30 minutes before dawn. So, you claim your spot and hang out.

Spots were taken early. One early morning, even though I had arisen at a very early hour, a whole stretch was already taken up by four anglers, who had gear, a small grill, and a cooler all scattered around to claim their area.

I’m still new to steelhead. So, I brought with me both a tightlining rod and a regular fly rod. I had all sorts of leaders, flies, and poly leaders with me in order to experiment and be ready for multiple scenarios.

On the first day, I fortunately landed a fish very quickly (with the kind help of a new neighbor and his net) and had others on soon thereafter. The next day, I had seven fish on. Thereafter, just a few a day. Sometimes, you work very hard and have very little to show.

Steelhead are powerful and can unbutton quite quickly, particularly if you don’t have a fishing buddy who can net the fish for you. I was two-for-16 on this trip. Clearly, I’m a work-in-progress!

Quite a few anglers were reporting skunkings. And, some regulars, who knew the spots and holding lies extremely well, hooked quite a few fish. They’ve paid their dues and are now cashing in.

I ran into people from Pittsburgh, NJ, and NH. They make it to Altmar a few times a year. Some have gone for over 15 years. Others, a mere seven.

I ran into Finbarr McDowell, a guide, a few times at the hotel restaurant. He was very generous with his advice and can be reached at the following email address: minkyfisherman72@yahoo.com. He doesn’t do any marketing, as he doesn’t have to. You’ll find that with the best guides (such as the Farmington’s Zach St. Amand). Business comes to them, and they don’t have to announce how smart they are.

I don’t think I had any “hot” flies, but I did find that smaller was better. Maybe, that is because I focused this trip on the Lower Fly Zone, a highly-pressured area; small flies do well at such spots. I also spent most of my time tightlining, as I found that swinging nymphs led to a lot of foul-hooking (and, others reported the same).

Honestly, I feel exhausted. Many early mornings and long days on the water. But, my overall feeling is one of gratitude. I feel very fortunate to be able to visit such a unique fishery.

I ended my trip in a low-percentage way that just felt right: swinging streamers as the sun set. I reeled up and just smiled and smiled as I headed back to the car.