As you know, we have written quite a few river overviews to feature waters that tend to be accessible, stocked and productive (link here).

I thought I’d share with you one person’s journey to find them. Your mileage may vary, but here’s what I did.

This book is incredible. For $16, it is like having a guide for many, many bodies of water.

Fuller features quite a few bodies of water and detailed write-ups on each of them. He even suggests parking spots and flies. It is very fun and exciting to read about so much opportunity around us.

It is how I started to fish the Millers, Nissitissit, Squanacook, Swift, Westfield and Farmington. It is a book that truly shares many treasures.

Step 2
I went to Google Maps. Using “street view” and “terrain view,” I tried to identify both potential fishy areas as well as parking spots. For the former, I identified structures, such as visible log jams, rocky areas and big bends in the river. For the latter, I looked for dirt pull outs; fishy areas tend to get attention, and the ground at good parking spots are worn down.

Step 3
Once at a new river, I take a look around. Trout tend to hang predictably in certain spots. Here are the main ones that have worked for me:

Step 4
Be willing to lose flies. One time, in Montana, I went nymphing with a seasoned angler. He added about 3x the split shot I did (this was before I learned to tightline). He lost flies, but he landed a lot more fish than I did. So, add more weight than you think you need. Over time, you’ll get a better grip on this.

Step 5
Keep remembering where you have found fish. It’s hard to explain, but it becomes a pattern-recognition game. As you spend time on the water, you’ll recognize certain spots as fishy.

Two examples. First, I a few weekends ago hit a new stretch of the Farmington (post here). Flows were the lowest I’ve ever seen it there, and there was a ton of snot grass everywhere. It looked very discouraging.

But, I had seen some fishy areas on Google Maps and just started to walk along the bank. Eventually, I saw a big rock in the middle of the water. I recalled a low-flow time at the Westfield River and how a fish out of nowhere appeared out from under a big rock and took my fly.

So, I tightlined nymphs around that rock. As Lady Luck would have it, I had three takes, and I landed two of them. Here’s one. 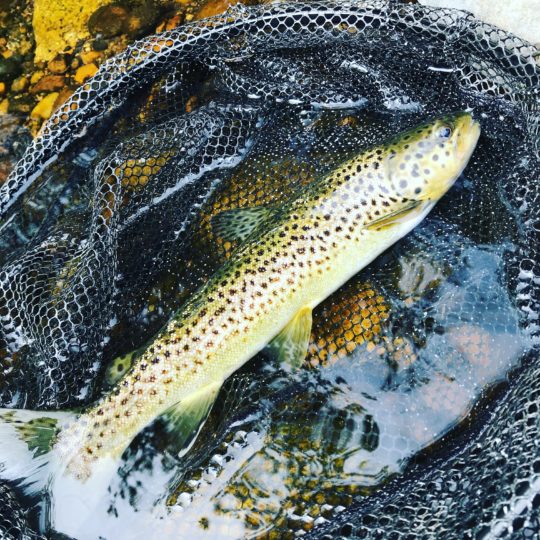 Second example. Two runs below the rock, I saw three currents merge into one, creating a lot of broken water for about five feet. It reminded me of an incredible spot up river, and one that I fish often; it is a very short and narrow trench that is the result of multiple currents combining into one. There, the currents collide, the water slows, and there is a very healthy bubble line under which is a deeper trench where good-sized fish hang out.

At this new spot, I threw out a Red Dart. A very good 15.5″ brown came to the net and ended up being the biggest fish of the weekend.

So, that’s what I do to find new water. Hope this post is helpful to you! To catch a fish at a spot that you’ve found with a fly that you’ve tied is a truly amazing sensation.

4 thoughts on “How to Find Fishy Spots”