I was able to have a double-header weekend and fished five hours on Saturday and eight hours on Sunday. After all the sadness and horror I felt about George Floyd’s murder, I was grateful to hit the water. Words cannot express my anger and sorrow….

I pursued dries-or-die each morning. I’ve been hitting new spots and focused on trying to dupe trout up top. Saturday was slow, with only one take before the sun started to beat down and eliminate all the shadows along the banks. But, it was a good-sized fish that took a brown #20 Mole Fly. 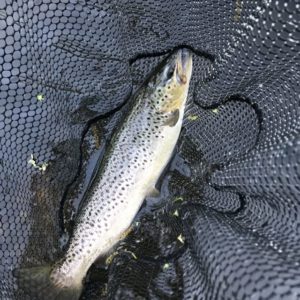 I fished at achingly slow water, and it was fun to creep around to look for rises. I tried all sorts of dries as an experiment, but that Mole Fly was the only one that worked.

The fish were definitely leery. They stopped rising whenever I got closer than 40 feet. I brought with me my Orvis H2 #4 and my Sage #000. The latter wasn’t useful, as it didn’t have the range.

On Sunday, I had better luck up top. After a billion or so casts, I managed to land three fish on dries. It was incredibly fun to stalk for fish and try to throw good casts that didn’t disturb the flat water. It definitely wasn’t a high-volume game, but I felt like I had earned each fish.

I tried various dries, and the Mole Fly continued to be the most effective pattern. And, brown outshone all other colors.

Once the sun was directly overhead, all rises stopped. That’s when I switched to wet flies, targeting riffles and glides. At one spot, another angler warned me: “Three young guys just cleaned up that area while Euronymphing with worms.”

Well, I think that wins the GenZ creativity award! I had always thought that tightlining with bait would do well. But, I’m not a bait guy and have no personal interest in trying.

I fished anyways. Fortunately, this beauty showed up.

It definitely looked wild to me, with very pronounced and beautiful fins (which you can see particularly well in the second video). It taped at 19″, and I knew it was a good fish when I could feel its head shakes reverberate from the line to the rod to my casting hand. Thankfully, the knots held, and I was able to angle the rod pressure so that the tiny barbless hook didn’t pop out.

I also hit some highly-pressured water for fun and right after a very talented angler tightlined the area twice. I landed a good number of fish and was surprised that wets did so well (our “how to” wet-fly guide here).

The hot wet flies included two 2020 Confidence Flies, a #20 Mighty Midge and a #20 CDC BWO Soft Hackle. I surprisingly got hits on a #14 Partridge and Yellow, a pattern that bombed for me last year.

My best wishes to everyone….

14 thoughts on “The Quest Continues”