Reading blog reader Nicholas’s comment (below the post here) made me realize something: there’s tremendous luck that goes with fly fishing.

The luck happens when you fish a run that no one has yet hit and disturbed. It occurs when you are nymphing, ready to cast at the end of the drift…and, find a fish on. It happens when, out of nowhere, Caddis hatch and the trout start slashing.

And, luck happened to me earlier this week.

Due to some work being done, we vacated our house for a morning. So, I thought it would be fun to hit the Swift and fish some dries that did well at other waters. So, I drove 2.5 hours to fish 2.5 hours (and, only fly anglers can look family in the eye and say that’s a good trade!).

It was a mob scene there!

I fish the Swift only once or twice a year now, and so, the number of anglers was jarring. Still, I found an open dry-fly spot and floated some Mole Flies and Roger Hill’s Stillborn Midge, which were overly generous to me last weekend.

As I wrote last time, for me, the flies that do well at the Swift don’t do well at other rivers. And, vice-versa. Call it confirmation bias, but that is what I found yet again.

The sun was high in the sky and beating down on me, but it felt great to feel some heat. I targeted some shadowy areas next to the bank. Fish or no fish, it was nice to cast a fly rod and chuck some dries.

At one point, I saw a fish rise. Then, again and again. In a few minutes, a Caddis bounced by, and the trout missed it. It was a good-sized fish. My pulse increased.

I put on one of my 2020 Confidence Flies, a #20 X-Caddis (with both CDC and elk hair), and started to work it. (I’ve become a bit superstitious about CDC, as so many patterns that work well for me incorporate it.)

Above me, I heard a different fish rise and greedily looked up to locate it. Then, I looked back at my fly and couldn’t see it. I decided to cast again and instead found that I was tight to a fish. The unintentional hook set! I’ll take that every day of the week!

At that exact moment, noted Swift angler Gary Metras was walking along the bank (mentions of him on our blog are here). I said hello, and we chatted while I tried to land the fish. Thankfully, with an audience there, I didn’t screw up, and the ‘bow slid into the net without too much trouble, as Gary and I caught up. 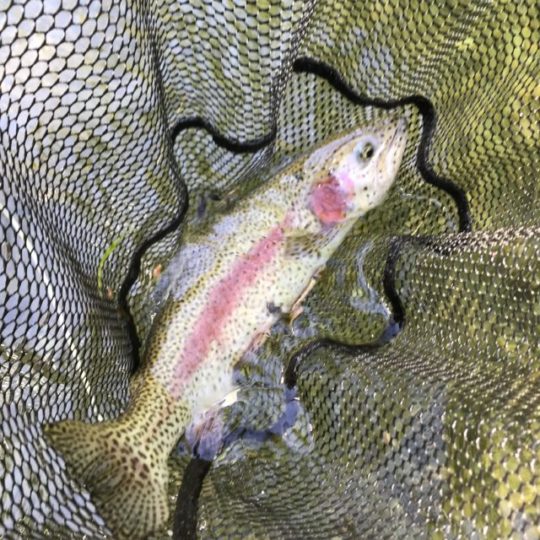 After a little bit, Gary said goodbye, I tipped the net to release the rainbow, and I realized that I didn’t miss the “Swift scene,” but I did miss some of the regulars there. There are some very kind and generous souls there like Gary, and they’re amazing anglers. There is a jerk, and I’ve observed the regulars give him the silent treatment.

I also realized yet again that luck is a huge part of the fly-fishing game.

I didn’t know this when I started to fly fish and would instead beat up myself on slow days or skunked days. But, the reality is that luck is a huge part of this foray that we love. Skills can come over time, but there’s always still that element of chance.

So, if you’re new to fly fishing, I hope you can be less harsh on yourself and have more fun. As blog colleague, Joe Drake, says, “There are no short cuts to fly fishing.” I agree with him, which is why any progress we make is sweet indeed and should be savored and celebrated.

We also should be looking to help others, as Gary did with me, and that is a major goal for our blog team.

We are about to welcome a new team member and decided to pull together an on-boarding document. We decided to emphasize in the document some principles, one of which Jamie Carr articulated as “humility.” I really liked that, as every angler still has so much to learn.

Tight lines and a Happy Juneteenth to all….