I think one of the most enduring parts of fly fishing is not the fish, the flies, or the trips. It is the people whom you meet.

I did a Bucket List foray to fish for monster browns at Arkansas’s White River (prior post here). Concord Outfitters set it up, and I ended up rooming with Dr. Steve Mirin.

“Doc,” as I call him, is a very self-effacing individual. You wouldn’t hear it from him until after many days together and, only in piecemeal, but he used to be head of the American Psychiatric Association. That made him the leading figure in, and the national spokesperson for, his field.

And, it required him to lobby for federal funding with the likes of Senator Ted Kennedy, Rep. Nancy Pelosi, and the most senior legislators from both parties at our nation’s capital. Doc also was a tenured professor at Harvard Medical School, which is both an honor and an accomplishment that very, very few candidates can garner.

And, Doc loves to fish. He has been to Cuba and New Zealand, and he has his eyes set on Alaska and other locales, too.

Since our trip, Doc and I have kept in touch. He took me to a hidden spot at which trout rise predictably in the spring and early summer. Recently, we opted for an evening float with noted guide and angler Chris Jackson.

Mike Vito, for whom I have tremendous respect and is a crazy-good angler who fishes only small dries these days, highly recommended Chris. From personal experience, and those of friends, I rely heavily on word-of-mouth from people I know before hiring a guide.

For those of you who don’t know Chris, he for a long time has been involved with the Deerfield River Trout Unlimited chapter, the good folks who won a national award for their conservation work to support wild brown trout (prior posts here, here, and here). In fact, he is one of the lead negotiators who has been tasked to encourage the power company to increase minimum winter-time flows to support brown trout redds. They have a critical meeting in a few weeks. Against all odds, we finally might have a fish-friendly policy at the Deerfield! 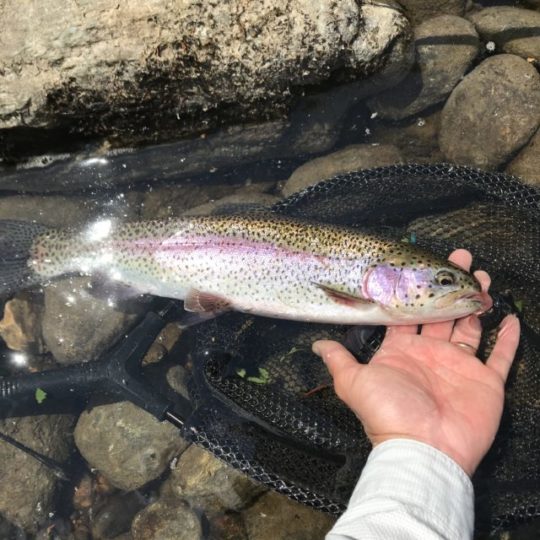 I arrived a few hours early at the river to try my luck. It was blindingly sunny when I got there. When dries failed to encourage takes, I switched to wet flies and immediately had strikes. I was fortunate to land some rainbows, including a very fierce fighter that taped just shy of 17″. It fought like a fish possessed.

As the sun started to set, the trout became more visibly active. Fish were rising all around me when I, alas, had to leave to meet up with Chris and Doc. Hopefully, I will be back for the trout one day soon.

Chris is a fantastic guide, and I would encourage you to reach out to him (his website is here). He took us to a super-secret spot that often produces good evening dry-fly action. As the fish gods would have it, we didn’t see many risers. But, when we did, Chris oared over to put us near casting range.

Doc was the expert angler, managing to get some takes and land a nice fish. I was blanked, but it was a cool experience nonetheless to be at a beautiful spot about which very few people know. I’d post photos but don’t want to betray trade secrets. I promised Chris, per my personal policy, not to share his spots or his flies.

It was great to hang out with Doc and Chris. I pulled into our garage just a touch before midnight, as we fished until we basically couldn’t see. Dinner was some fruit and cookies, which I wolfed down while driving. Fishing in the evening from a boat was a different experience, and I learned a lot.

Give Chris a call for a trip, and I will definitely be back on the water with him.

Doc, thank you for your friendship. Chris, let’s go for wild browns in the autumn?

3 thoughts on “An Evening Float with Chris Jackson”