There are plans. Then, there are fly-fishing plans. The latter often don’t go as scripted. Yesterday’s didn’t, but what an evening Sulphur hatch.

I like structuring my days and weeks and am partial to planning. But, as we anglers all know, there’s only so much planning that works with fly fishing. Due to luck or the vagaries of trout behavior, there’s a lot we don’t control. And, so it was on Saturday for me.

I eased out of our driveway a little bit before 3 am with firm plans in my head. After seeing so many fish last weekend on two dry-fly patterns, the Mole Fly and Robert Hill’s Stillborn Midge, at some new water, I wanted to return to that stretch for a morning bug hatch.

It was still dark as I eased into the parking area and geared up. With quite a few new flies on the ready, I felt I was good to go. I love all fly fishing, but there’s something about about being first to a spot in order to throw small dries to hungry trout when the water is cold and the air is cool on what will be a hot and muggy summer day. You can beat the crowds, and you can beat the heat.

Everything appeared to be going as planned, as Midges and Caddis started to pop. I waited on the bank for rise forms. And, waited and waited. Impatient, I started to cast blind at the same near-the-bank lanes that held so many fish last time. I hoped to see fish rise and inspect my offering. Still, nothing.

Eventually, I concluded that this was going to be a different dry-fly outing. What a difference a week can make. Still, I kept throwing dries and eventually started to see a few episodic and desultory rises. Perhaps, there was a lot of feeding going on sub-surface, and I just couldn’t see it?

So, I put on a wool strike indicator and some nymphs and targeted those slow and foamy current seams that we anglers all love and lust for.  I stayed on the bank to preserve a semblance of stealth mode and eagerly cast my rig. I longed to see the tuft of wool dive, pause or flutter in any way. Instead, it was like a casting practice session for me.

This clearly was going to be a tough day, I thought. Well, if I’m going to struggle, I didn’t want to throw an indicator all day, and I switched back to dries.

Eventually, I did dupe a little guy. He fell off. It was a clean hook set, but the trout had something else planned for me. I call it “taunting.”

I thought maybe that wet flies would do the trick, and so, switched over to that set-up and put on some of my go-to patterns. They didn’t work. So, I switched back to dries, determined, amused, and puzzled.

Hours later, after rotating dry flies and eating through a lot of 7x tippet, I made the long walk back to the car to get my Euronymphing rod. I love throwing dries, but I was determined to catch something.

I’ve run into tough times like this before. The river is low, the sun is bright, the fish have been pounded for months, and it becomes a technique game for me. And, tightlining usually beats the summer doldrums if I can do a couple of things:

Eventually, it worked. I was able to dupe one decent brown from a bubbly run. But, that was all. 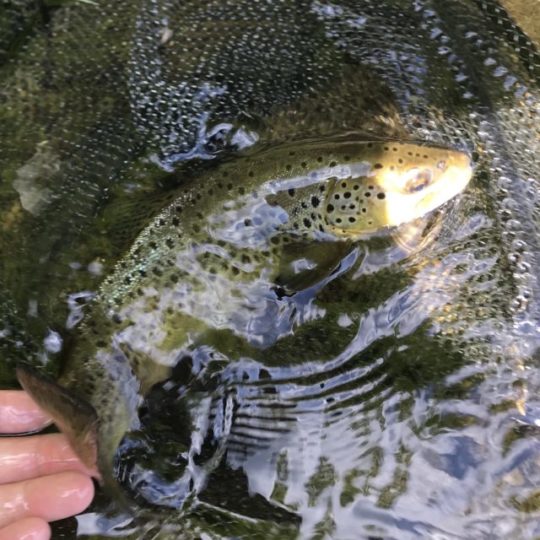 I didn’t want to keep Euronymphing at other spots. My case of Tightlining Burn Out is almost as bad as my Swift River Burn Out. With the soporific sun really beating down, I decided to break for lunch.

Feeling the effects of the heat, I turned the AC in the car to maximum and drove over to my favorite sandwich spot, The Better Half Bistro. As luck would have it, UpCountry’s Torrey Collins was there as well, and we grabbed a socially-distant meal outside and chatted.

I told him about my weak morning and my theory that fish have been pounded so hard, they’re extremely selective and leery. Torrey said that he has never seen the river so busy.

For me, I think that’s a good thing. Many people are unemployed or under-employed and wanting to get outside. I think many are taking up fly fishing for the first time and looking for something new to distract themselves from the weary ways of today’s world. And, I think all that is good, if a river can give respite during such challenging and odd times.

Torrey and I said our goodbyes. It’s always great to speak to him. He’s a great guy.

At the next stop, wet flies again didn’t work. I also threw dries. I saw a take, waited for the fish to close its mouth, it spit the hook, and I foul-hooked a good brown that I broke off. I saw some rises and targeted those, but couldn’t get anyone to play ball.

Feeling more amusement and puzzlement, I decided to drive back to the earlier spot to see if I could be there for the late-afternoon bug hatches.

It took hours, but eventually, Sulphurs started to pop. I split water with Charlie from NY, who guides at the legendary Upper Delaware, known for its technical dry-fly fishing and unicorn brown trout. Get this: earlier in the day, Charlie ran into two black bears.

The later it got, the heavier the hatch became. The Mayflies looked like a flotilla of small sail boats floating down the river. And, then, the switch flipped. Many fish started to rise regularly. My pulse increased.

Charlie got a fish with the Missing Link drowned Caddis pattern, which I miraculously had tied the night before after seeing an Instagram post from Deerfield/Swift guide Chris Jackson. That fly didn’t do anything for me, as the fish continued to be selective. I rotated flies and couldn’t buy a take.

Two rod lengths away, I saw a very good fish rise and take the fly. Finally! I was in business. It immediately pulled with force and ducked for some structure and stuck my fly on some wood. And, just like that, it was gone.

Eager to get back to casting, I pulled on the leader. It was really jammed. I increased the pressure until I felt a pop. Unfortunately, I not only lost the fly, but a section of my homemade Harvey Slackline leader, too.

It seemed like a good time to yelp out some four-letter words. But, I didn’t, as fish were rising, and I had to quickly salvage the vestiges of the leader.

Soon, shadows were on the entire river, and the fish rose aggressively, some splashing and some porpoising, which is always a beautiful sight for me.

Eventually, the trout felt bad for me, and I had a fish on. This one ate my fly with a loud splash, which made me think it was a small fish. But, when it pulled, it felt substantial. Eventually, I tamed a clean-looking brown, maybe 17″ or so, and Charlie came over to inspect my work.

“Thanks,” I said, trying to play it cool. It is pressure fishing next to a guide! 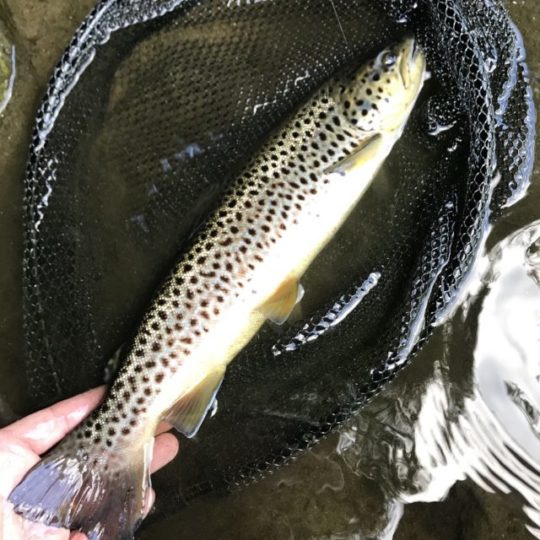 For the next few hours, we kept working the rise forms. Charlie and I chatted amicably. He was convivial and thoughtful. The fish were still picky. So, it wasn’t easy fly fishing, but it was rewarding. Drifts had to be true, 7x tippet worked better than 6x, and the fish stayed down if you got too close.

Eventually, the stars can align, and when you are tight to a fish and feel that jolt of something alive electrifying your fly rod, you no longer have sad thoughts about the coronavirus or how unarmed African Americans are killed unjustly, and you no longer have worries for our country and the health of your family and friends. It is just you and the fish as the day’s heat eases, and as it gets harder to see your fly as dusk creeps in, the minutes tick by in a glorious setting in which rising fish appear as a sign of hope and life, almost miraculous and like a gift from God. “I’ve got you,” you almost feel God saying to you. “This will cheer you up.”

Soon, the hatch stopped, the fish hunkered back down, and all was quiet, except for the sounds of two anglers casting. Charlie and I had each pocketed three fish apiece. It was a lot of work for just a few fish, but it was an epic dry-fly session, one full of challenges and joy.

“Charlie, I’m going to call it a day.” I had been fishing for 14 hours. We said goodbye and said we’d see each other again at that same spot.

As I eased back into our garage at 9:30 pm, I was both tired and happy. I had never before fished a robust evening hatch, and I now know what people are talking about. As a parent with an intense day job, I usually fish early so that I can get off the water early and be home in time for family dinner. So, I miss the summer evening dry-fly action.

But, now, with all of our children much older, I have the freedom to start to push the boundaries on occasion.

It’s very funny, but there are cycles to a year of fly fishing as well as to each day. Fish get active and then don’t. And, it’s the same with a fly angler’s life. There are years when you can fish as a young person. When children come, it gets hard. And, in my case, I fished only once a year for a long, long time. Then, children grow up, and you get your personal time back.

Seasons and cycles. Each has its own positives and negatives. As I add more decades to my life, I’m looking forward to more evening hatches like last night’s epic Sulphur action.

I texted excitedly with the blog team once I got home. I told them what I had learned, and I hope we all soon can fish together again and throw dries.

A happy Father’s Day to all….

7 thoughts on “The Epic Sulphur Hatch”