The Deerfield is a terrific river.  But, it’s a working river, and the pulsed flows and size are often not an ideal match for youngsters and those new to wading.

For the most part, when we are camping at the Mohawk Trail State Forest with the family, we are primarily fishing small streams (Part 1).

This trip was with my nine year-old son, and we were later joined by my wife and six year-old daughter. 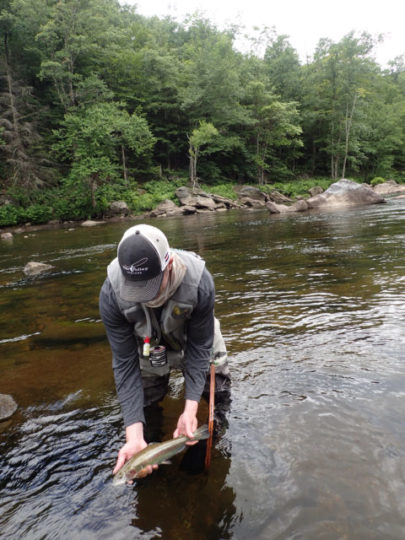 It’s a pretty big challenge to get the kids to catch larger rising trout on a bigger river.  It’s typically enough of an accomplishment for me to do it!

The first night, my son and I set up our tent and headed straight out to a favorite haunt for the evening.

I set him up with a big bushy dry, gave him some instructions on how to fish a quick flow that he could raise fish out of, and he made all of a single cast before moving on to slower water he liked much better.

I got off three casts, and took two nice rainbows on a parachute blue wing olive.  Great start!

My son then took my rod and missed three fish in the span of 10 casts, tipped over on his butt in the water, got soaked, and pouted about missing all his fish.  Then, he started to get cold (he was wearing shorts and had refused to bring a sweatshirt).

Just like that, we went from being set up for a full evening of catching risers to quibbling on the riverbank and having to head out.  Within 10 minutes, we were making dinner and laughing at ourselves.

Try as we might, we never got him to land a good fish on a dry at the Deerfield on this trip (ironically, he cleaned up on a hatch one evening three years ago).  He missed many and long-released several.

He had shots with short casts, long casts, easy drifts and complex ones.   He had a heart-breaker when a large trout sipped his fly, and he smoothly set the hook.  After that, he got too excited and buttoned down the line, resulting in a pop when the 5x tippet broke, as the fish ran for a pool.

That was a tough one.

The last night, we made it to a spot with a few rising fish. As the sun went down, the rise really picked up steam, and fish started rising all over.  However, we really struggled to figure out the hatch.

There were many large adult caddis on the wing,  but those flies didn’t draw a single look.

There were large stoneflies over the water, and a few smaller yellow sallies: no takers on those patterns either.

There were three kinds of mayflies as well, so my son got to hear me swear, something I rarely do.

We had stocked up on flies at Overwatch Outpost earlier in the week, and I think we went through all of those dries.  We kept at it and ended up having success with a dark size 16 mayfly spinner…even though the splashy rise forms suggested that should be the last fly to work.

My daughter Brooke describes our last evening like this: “We got some pizza.  Only Mommy and Brooke ate the pizza.  We ate a couple pieces.

“Then, we drove to the Deerfield River.  Then, when we saw Daddy’s car, we went down to the river.  And, then, we heard laughing and saw some headlamps in the river in the dark.

“We yelled ‘pizza delivery!’ The boys said to put the pizza in the car,  they would come get it later.  I heard some yelling about lots of fish rising.  And, they did come back later, and they almost ate the whole box of pizza.