I used to go up to Maine in June to chase big brook trout in the Rangeley Maine area.  As my son started getting older, I could not leave for a fishing trip and not take him along!

So, we started heading out to western Massachusetts and camping at the Mohawk Trail State Forest, located right on the Cold River.

Our first trip was in 2015, just as he had turned five. I picked him up from school on his last day of kindergarten, and we headed west together.

This year marks our fourth annual trip, and when my daughter reached age five last year, she was all in, too. We still try to get a day or two with “just the boys,” but my wife and daughter can both handle a fly rod, and they have a ball joining us.

This area is a great jumping-off point to fish all kinds of small, clear streams with native brookies. It really is a great way to introduce kids to fly fishing. They really get into the stalking and casting and holding a beautiful little trout for a moment to admire it before releasing it.

In between, there are typically all sorts of hi-jinks and antics involving wet clothes, eating too many snacks, and finding big fish in unlikely places. This year was no different.

We started out on a small creek where we had great success last year, and we were disappointed not to see a fish. We’ve found it is generally best to work at east two or three different streams in a day, as the fishing may vary from good to great to non-existent in a given place from one year to the next.

I think this has to do with water levels over the past year or so, with a strong emphasis on recent water levels and water temps. Those determine whether the trout move up or down within the system.  Small streams vary more, and, more quickly, than larger flows.  On our way to the next location, we jokingly decided to stop in to see what we now call “Naked Lady Brook.” 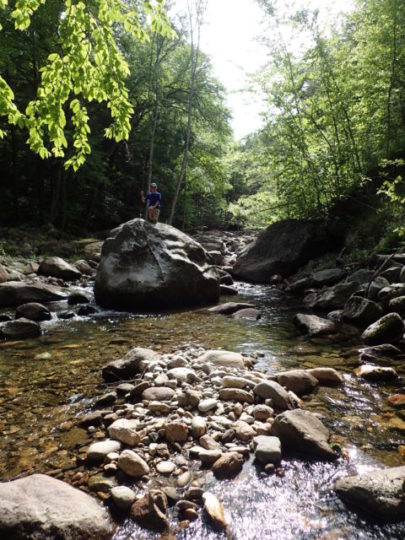 Last year in June, we had a terrific heat wave in the mid-to-high 90s, and as we were scouting an out-of-the-way little stream, we ran into a young woman cooling off by sitting in the cold water.  She was as wide as the stream and devoid of any clothing.

She managed to cover up as we came around the bend, and we managed not to see anything too clearly other than a new nickname for the stream.

This year, my son saw a pool, and since we did not fish it last year, we stopped in to investigate. I walked ahead defensively. He ended up catching about 15 trout from that pool, and we stopped for lunch.

We then wet waded for the next four hours, admiring the cold water, the rocks, small waterfalls, and fish and made small stream discoveries.  I caught a gorgeous five-inch brookie on a dry fly at a run that did cover the top of my boot when I stepped in it.  We traded pools and explored, busting on each other when one would botch a cast or spook a fish.

I really can’t think of a better way to spend a day. 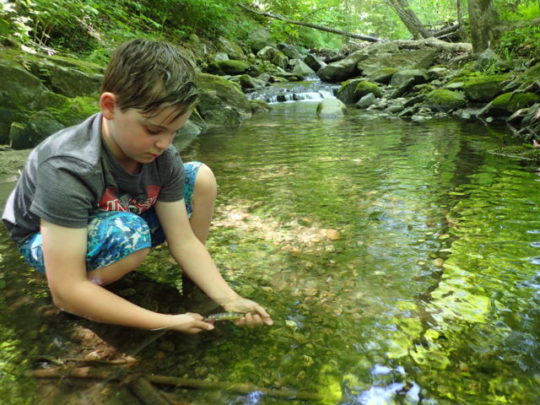 We saved a few choice pools for the girls; they had immediate success when they arrived and got right into the swing of things. We all cheered when my daughter made an accurate 15-foot cast upstream to a downed tree and landed a male brook trout with a yellow belly.

Now that the kids are tying their own flies, they get to test out some of their creations on the fish.  After we had little success at a very deep pool, my son tied on a black-and-gold nymph that he created.  He ran it through the tail of the pool, and a nice rainbow mistook it for lunch, bending his rod.

He could not have been prouder when he landed it and held it up for a picture. I was pretty proud too, because I hadn’t helped him with any aspect of that catch.  It’s a great feeling to see your kids complete a complex task entirely on their own for the first time, when you know and they know they have picked up the skills to do something entirely on their own.

On our last day, I was finishing up a breakfast of bacon and fried eggs.  I was seated next to the campfire and facing the Cold River about 30 feet away.  I thought I saw something fall in the little pool by our site.  When I saw a dimple in the same place again, I knew it was a rising fish.  It looked like a good one, too.

My son materialized with his rod and a dry fly before I could take the last two bites of my breakfast.  He crept down to the river and made a cast.  We all thought it had gone over the fish, but the water suddenly exploded and he had a fish on!

My daughter netted it for him, and we admired a nice rainbow that had set up shop in the little pool they had played in for hours the day before.

The Cold River is not very productive, but it seems like each year we find one memorable fish in it! 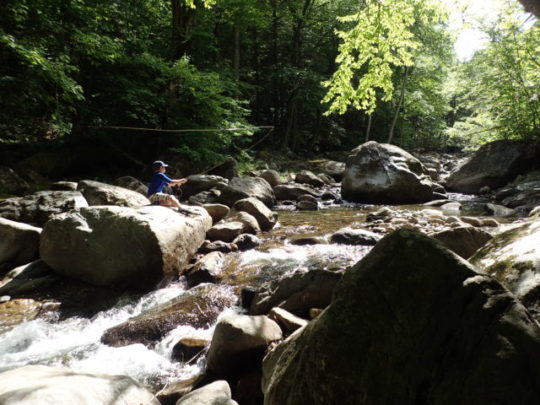