I arrived at dawn at the Farmington, wondering if the Trico hatch would be on. It was relatively brisk at 53 °F, a big change from just a few weeks ago. I actually felt chilled.

There was a modest Trico hatch and just a few fish rising. Later, the spinner fall happened, and, again, only a few fish were rising. They’re quite sophisticated at this point and wouldn’t take anything that I was throwing up top. So, I added a Sunken Trico Spinner to the dry and landed a few that way.

Not much of a crowd at the spot where I fished. Some people came and went, but it was pretty much just one other angler and I for most of the morning

Later in the morning, I worked some riffles and noticed quite a few BWOs hatching, as well as some Caddis. I put on a #24 olive parachute. Nothing. WD-40. Zilch. X-Caddis. Nothing. Son of Sexy Walt’s. Nada.

You get the idea.

For me, September is the toughest month for fishing. Hatches are sparse, and the bugs are small. The trout are educated. Water is usually low. The autumn spawn has yet to start.

As the sun rose, I saw some fish rising steadily downstream of me. Gentle rises, no splashes. Just ripples of water spreading out in concentric circles. Bulge rises. This meant that the trout were taking vulnerable emergers below the surface film.

I remembered something from Ed Engle’s Fishing Small Flies. During a hatch, trout can be very focused on where the bugs are in the water column. If there is a ton of them below the surface film, the fish will be less inclined to take dries up top. They don’t have to.

So, on a hunch, I put on a #20 CDC wet fly: Tiemco 2448H emerger hook, olive-brown thread body, extra-small black wire, and some CDC. I had a bunch of leftover feathers after using the tips for small BWO parachute flies.

As luck would have it, I immediately felt a jolting take. A good fish came to the net. Crazy!

I decided to keep fishing this fly. I enjoy fishing wet flies. There’s a certain grace to throwing a fly downstream, letting it sink, and letting it swing gently. And, the takes are very powerful.

I had strikes when the fly swung in front of underwater rocks. The trout were holding there in the pillows of soft water. More fish came to the net. Nymphs were getting active, for I periodically could see trout flashing down deep, picking off bugs as they started to ascend up the water column.

Later, I switched back to the X-Caddis and dropped off it a black midge larva, with a tiny glass bead on it to give it some weight, as I was fishing some riffles. This 16″ rainbow came to say hello. 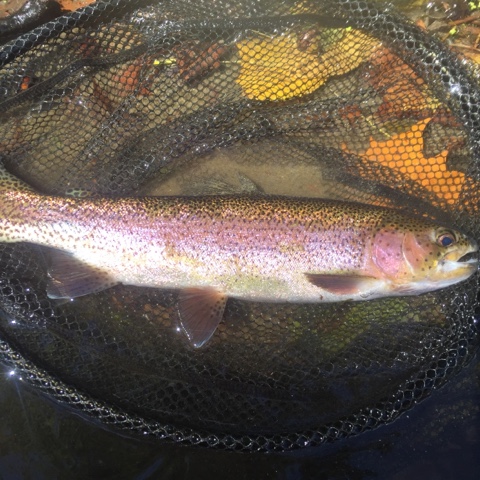 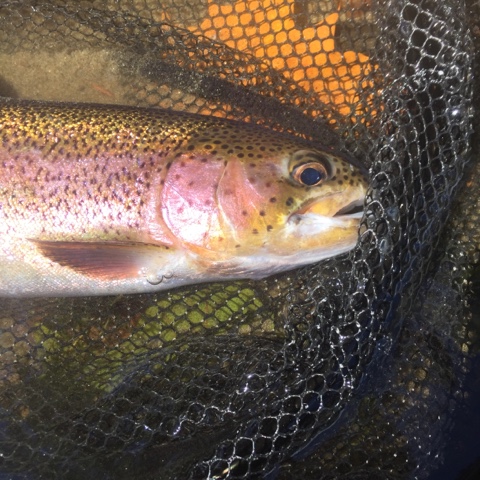 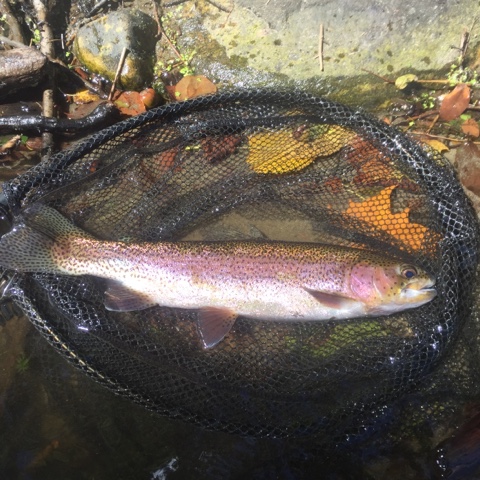 I stopped counting fish after a while, but I think over a dozen were landed. Fishing small wet flies downstream can be tough, for it can be tricky to set the hook. But, I gradually am getting better at it. I find the key is to wait a second before gently raising the rod tip. When I didn’t do that, I pulled the fly out of the fish’s mouth. I learned that lesson quite a few times! I also think that tying the wet flies on the Tiemco 2488H hook, which has a 3x gape, really helped.

Crowds have thinned out at the Farmington. Hope you get a chance to fish this weekend. A good Labor Day for all….

5 thoughts on “Wet Flies at the Farmington River”