As best I know, I’ve never met Gary Metras.  I’ve read the interview in this blog about him.  And he’s been kind enough to comment on an article I’ve written. I watched a YouTube video that featured him so I’d know what he looked like in case I ever happened upon him on a river.

What made me curious about Gary Metras was his designation as Poet Laureate of the City of Easthampton, Massachusetts.  I don’t know many poet laureates.

According to the Merrian-Webster Online Dictionary, a common definition of a poet laureate is “one regarded by a country or region as its most eminent or representative poet.” 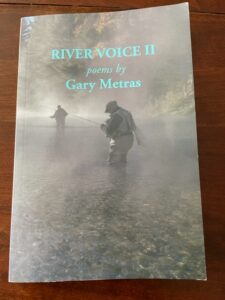 Normally, I don’t have the patience for reading poetry.  I don’t want to spend the time or energy pondering the inner thoughts and idiosyncrasies of the poet, as if somehow they held any relevance to me.  I want the goods handed to me on a platter where I can see them clearly, cut into them with a knife and fork, and see how they taste.  I don’t need the stuff that is so erudite that it makes no sense.

But I’ve never read poetry about trout fishing before.

When I got my copy of River Voice II, I intended to read a couple of poems until I reached boredom, wait a week, and read a couple of more, etc.  But once I started, I couldn’t stop.  Before I knew it, I was half way through the book and was chastising myself for not taking the time to savor each poem.

I didn’t have to psychoanalyze Mr. Metras.  I was right there walking with him in his poem Walking Along the Swift River.  In Variations of Rejection, his experience with trout and with women were all too familiar to me.  I know where the Bobcat Tree and the Cable Pool are. His poems were about all the places and experiences I know as a fly fisherman. The food was on the platter, and I was devouring it.

As I would digest some of Mr. Metras poems about experiences on the river, I would think at first that he was reminiscing about fly fishing, but often, with a deft turn of phrase, I realized that he was teaching me about life.

Gary Metras is not only the Poet Laureate of the City of Easthampton, Massachusetts.  He is my poet laureate, and might be yours too.