I slept in the back of my truck. ¾” plywood covered in marine carpeting kept me sleeping dry. A homemade setup underneath my camper shell. Another forest service road and another after that had found me a safe spot to camp after the yesterday’s storms.

To me, everything after yesterday was icing on top. I landed an Apache trout the evening before and I couldn’t be happier. Well that’s night quite true, I know there was a bigger one waiting in the depths with a new lip piercing. I could hear it’s siren call, drawing me back, asking me to waste the rest of my limited time seeking that enigma of the creek. 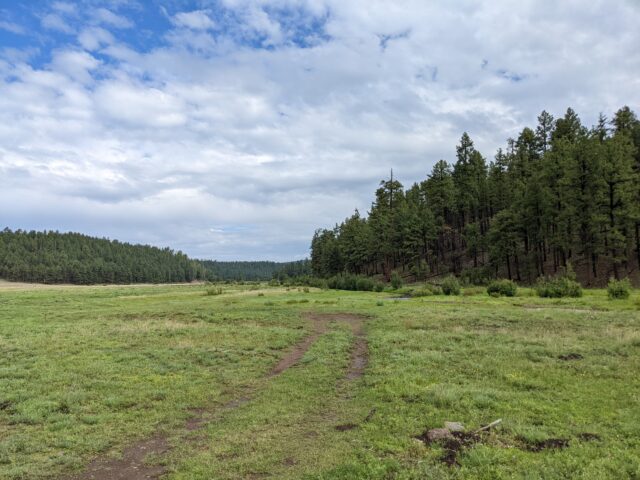 Instead, I boiled some water, made some coffee, and drove down to the next river to try, the West Fork of the Black River. And what a river. I pulled into a beautiful open field.  I sat on my trucks tailgate and sipped the dregs of my coffee sludge. Savoring that caffeine, I slipped on my waders. Early morning mountain chill made me thankful I found space for them in my kit for the trip. Even in the middle of summer, 8,000 feet of elevation still makes for a chilly start to almost any day.

The spot was two hours of gorgeous and unproductive waters. So I moved on to fresh pastures, metaphorically speaking. I moved closer to waters near the West Fork of the Black River Campground. And just like fish, I can pass up a nice bridge or culvert. Within minutes I was using last night’s toe bite to inform my fly selection: a classic small crawdad fly.

And in moments my efforts were rewarded. Two Apache trout pulled out of the same little pocket in quick succession. I couldn’t believe my luck. 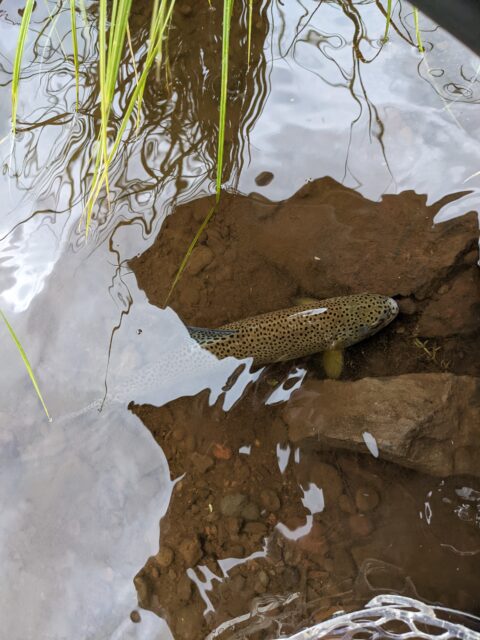 I kept moving around to new spots through the morning and trying without much luck. A nibble here, a strike there. But more often, my flies were lost to the streamside brush. I jumped back in the truck and made for a spot on the map that looked promising but a longer walk than I should have planned on. Here’s something for you to remember if you ever find yourself in the mountains in July in the West. Rains will come. Normally sometime around noon to three in the afternoon. So when the air feels weird. Pay attention. Don’t get caught in the middle of nowhere. Don’t be like me.

Again I had to seek the cover of a large ponderosa pine and hung tight in raingear and thankful for my waders. The temperatures dropped hard for a short moment, and the hail cracked the branches above me. Thunder cracked. It was deafening. I felt the boom as much as I heard it. These storms where literally moving over me, and because I was on the mountainside, the storms were just over my head, and the lightning with it.

But again, thankfully these storms moved quickly, and I dragged the crayfish pattern through the little storm pulse cranking through the creek section I was in. And another 3 Apaches came to the net. Beauties all around. 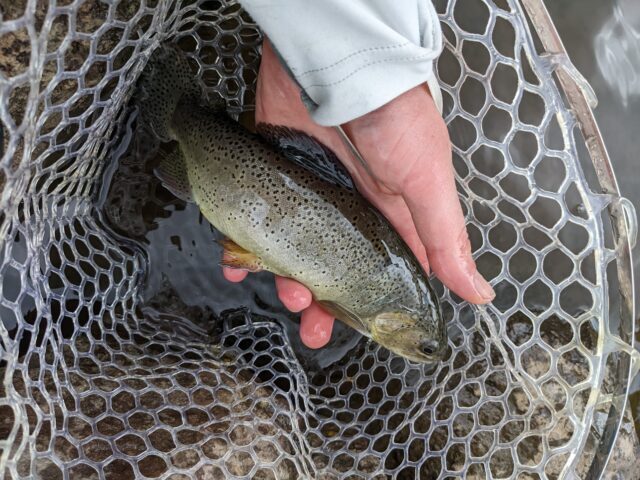 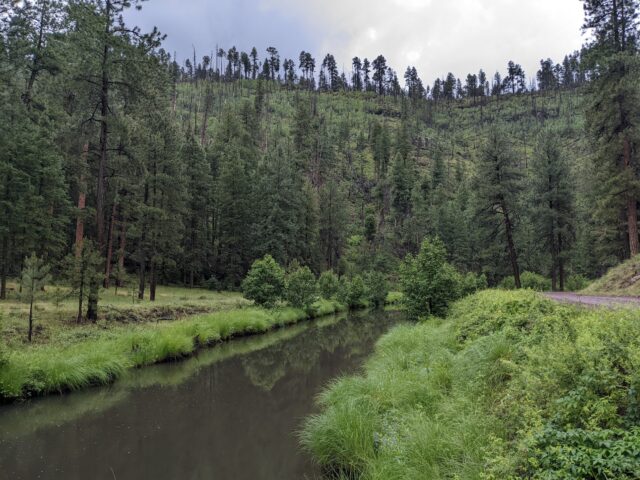 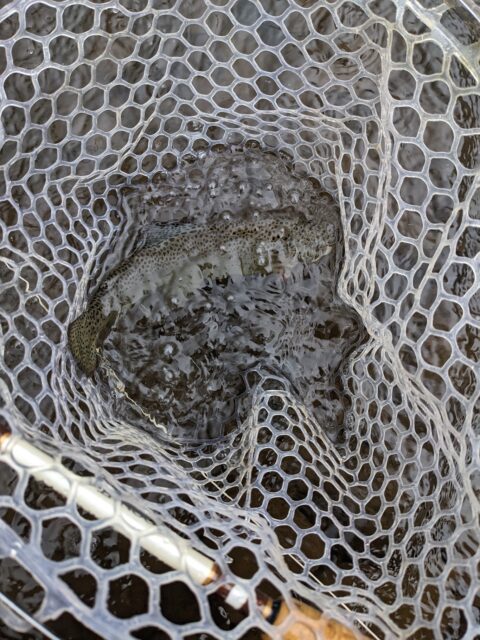 And so, with an ego full of fish, I decided to succumb to the little voice that had stuck in my head since I lost my fly last night. I couldn’t quite it. Even after all the beautiful fish I had landed through the day. I had to go. Go back to the where the darkness had stolen my last bugger. And so I went. The storm battered my windshield for a while longer as I drove back to the East Fork.

Quickly again, as rainfall is so localized in this part of the world, it stopped. And so, I crawled back through the brush and posted myself up in the water below the pool’s tail. And looked through the tiny fly box I had at my disposal.  And I pulled out a fly tied by a close friend. A friend I had on my mind since I had to head south for work and life. But it was a beautiful and generic and wonderfully tied bit of a better bugger (do you see a theme here?).

And in my second cast I lost it. And nearly lost my mind. So, I tied on another crayfish imitation. And I started slinging. 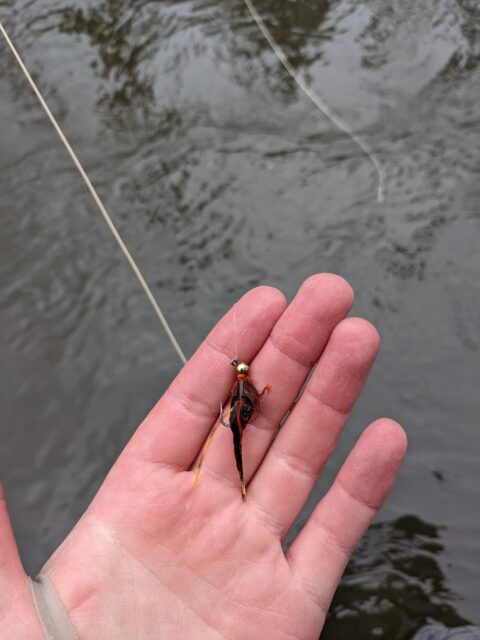 And I cast for nearly 30 minutes against my better judgement. This isn’t the Swift. After about four casts you generally have scared anything to be had to catch. But I knew there was something to be had here. I had faith and conviction ta’ boot.  And I must have eventually pissed the fish off somewhat fierce by hitting it in the head or something like that, because my last strip stopped in mid pull to tear out of my reel. Thankfully it had a very short run to take me on before I could recover. And a lively and delicious fight later, I landed a 13 to 14 inch Apache Trout from a tiny stream in the mountains of Arizona. I could not believe this. I was in my own dream. 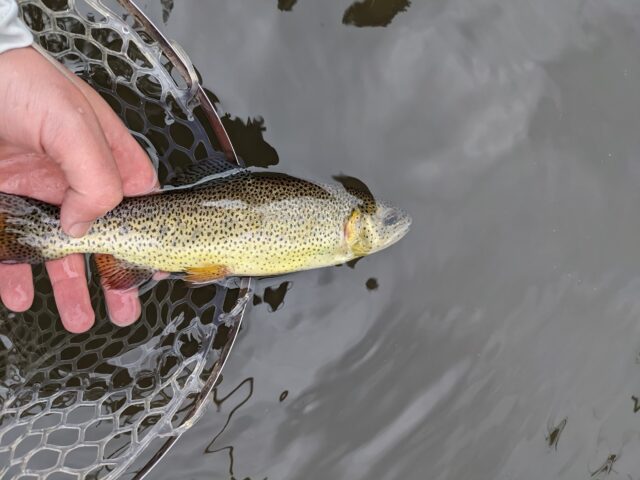 I don’t have the words to tell you why it mattered so much. Why this little fish in this little creek in this little mountain range mattered so much. But it mattered. After cataclysmic fires that nearly eliminated it from the face of the earth and in the face of climate change and habitat loss, this hoss of a native fish still abides. It’s a thing to be in awe of. We should be proud of our conservation heritage. Without it, the fish likely wouldn’t still be here in the face of commerce and industry. So lest we take it for granted, I remind you, this big little fish still is out there.

I called it after sitting on a rock in the on-off drizzle of that evening. I start a drive out of the mountains but still through them. A few dozen miles and a few hundred elk, I pulled into an aspen grove to gnaw on the last of beef jerky and drink my last 2 beers before bed. I dreamt deeply. Of what I don’t know. But I did. And I was happy. Happy to be on my way home.

6 thoughts on “The Day After the First Day Back”