A fishless fall was forecast for the forlorn East Branch of the Westfield River.  MassWildlife didn’t even list the Westfield among its destinations for this fall’s 63,000 trout. MassWildlife is obsessed with stocking every pond in the Bay State with trout, but parsimoniously puts them in rivers where they belong.  But this year, one could hardly blame them since the Westfield was down to as little as 10 cfs during the summer months due to the drought.

But Christmas came in October for East Branch fishermen when MassWildlife pulled a switcheroo and stocked the river, and the heavens opened with enough rain to have it cranking at a robust 400 cfs.  That was on Wednesday.

But by Friday it was down to 120 cfs, and by 8 am on Saturday morning when Drydan and I were leaving Boston, it was a meager 87 cfs.

We almost went elsewhere, but we had most recently fished the Deerfield and the Farmington and wanted a change of scenery.  And regardless of how poor the fishing might be, we knew the fall colors would be amazing in the Chesterfield Gorge.

We only saw three cars in the pulloffs along the boulder-strewn “road” that parallels the river, but they were strategically positioned in the three places that we had hoped to fish.  We pulled in next to a vehicle as two men and a woman were putting on their waders.  One of the guys raced off for the river, while the remaining couple leisurely finished putting on their gear.

Shoot, they know what they are doing.  Downriver from here is much better than upriver.

“Okay, well, good luck! Don’t catch them all.”  As it turned out, I didn’t really need to worry about that.

After we got all our gear on, we drove to another location so as not to crowd the Trio on an uncrowded river.  We were pleasantly surprised to see that the flow, even though lower than we had ever fished it before, still has some spots that were deep enough to be murky and the current was fast enough to employ a tightline technique if we wanted to.

During the last few times I’ve fished, I’ve felt compelled to use a dry-dropper set up.  I guess the low water conditions have called for a stealthy approach. I also have it in my mind that fish are still looking up for terrestrials in September and into October.  My biggest trouble with fishing a dry-dropper is that I flunked the class on how to make a dry fly float.

I’ve seen guys drop a nymph with a 2.5mm tungsten bead below a size 16 BWO and float it through riffled water, and the BWO floats like a schooner.  But I can put flotant on a size 8, foam-laden Chubby Chernobyl, tag it with a 1.5mm Perdigon, and cast it into a languid pool, and it sinks immediately. To fish with a dry dropper effectively, I have to use a dry fly that’s the size of a pine cone.  So much for stealth. 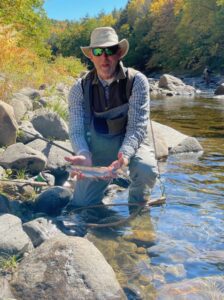 Somehow, given my sinking dry, after about 10 minutes, I was able to catch a 12” rainbow on my soft hackle pheasant tail dropper.  But beyond that one stocker, Drydan and I weren’t able to move any fish in that stretch of the river.  So after about 1.5 hours, we drove back down to where the Trio were, hoping that they had moved to another spot.

But alas, alack, they were still there, about 100 yards below where we began.  As we fished the pocket water on our way down towards them, I noticed that they weren’t really moving from this one area. I saw one of them net a trout.

Drydan found a productive run that issued two nice rainbows.  I went down below him to a pool that was just above the Trio.  Once again, I noticed that they had netted another fish.  The guy I previously had spoken to yelled at me, “That makes fifty trout!”

You might say that piqued my curiosity so I walked down to where they were fishing.

“It sounded like you said you have caught fifty trout.  I have fished this river many times and never caught nearly that many.”

“Oh, we catch that many here every year.  They are always in a few pods along this stretch of the river.”

They caught another trout.

“We are about to leave and you can have this spot.”

“Well, thanks!  I’ll just fish below you until you are ready to leave.  Uh, what are they biting?”

“Any kind of nymph.”

I began fishing the run below the Trio with my dry/dropper.  I figured that at least a few fish would have found their way down to my pool, but I was having no luck.  In about five minutes, the Trio left their spot and began walking back to their car, passing Drydan along the way.  I didn’t want to seem too eager to jump into their spot, so I cast a few more times where I was.  Besides, after 50+ fish had had their lips pierced there, could there be many fish left that hadn’t felt the hook? 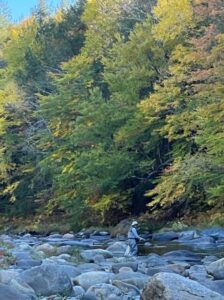 When I turned to walk up to where the Trio had been fishing, there was Drydan standing right where they had left.  He yelled at me, “Do you know which spot they were fishing?  They said there were 50 fish in it.”

“They actually caught 50 fish,” I said, “and they were standing right where you are standing now.”   While Drydan tied on a nymph, I threw my dry/dropper in the hole and immediately caught a rainbow on the SH PT. Then Drydan caught two in succession.

I wasn’t getting down deep enough with my dry/dropper so I switched to a strike indicator. As I did that, Drydan had a double.  But it was double trouble because they both broke off and took his flies.

While Drydan was tying on another set of flies, I managed to catch another one.  By the time Drydan was back in action, I had had enough.  It was too easy – like taking candy from a baby.

I began to work my way up the river, while Drydan caught trout in the Trio’s hole.  I couldn’t fault Drydan.  His wife is about to have a baby and his trout-fishing immediate future is in serious jeopardy.  He was storing up trout-fishing sensations like a squirrel stores up nuts for the winter.

I managed to catch six more 12″ to 15” rainbows as I fished the next 150 yards upstream.  When I walked back to find Drydan, he was still in the same spot.  He had tallied more than 30 and was still catching them when I broke the news that it was time to head back.

Drydan smiled all the way to Boston.  He had gotten what he wanted for Christmas.

4 thoughts on “Fish in a Barrel”