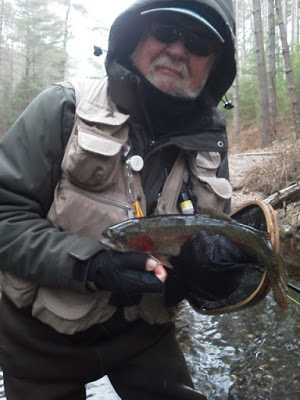 Gary Metras is a Renaissance man.

I ran into him a few times while fly fishing, and we over time began to chat. The more I spoke with him, the more I learned about trout and his fascinating background.

And, he is one incredible angler. He last year landed 1,000+ trout, about which he recently wrote in “American Angler.” Gary also is a poet, operates a print press, and taught many students for decades.

Plus, he is a very, very nice person.

Gary, thank you for making time for this interview. Tell us a little bit about yourself. Where were you born and raised? Your family?

Father’s family from Chicopee, MA (the Aldenville section); he was #13 of 15 children.

Mother’s family from Chicopee, MA (the Aldenville section). She had one brother. Her mother died when my mother was about five years-old and, her father, when she was about seven. She was raised by her mother’s twin sister, while her brother was raised by an uncle.

Father was a WWII Navy SeaBee veteran of Saipan and Okinawa. He was a plasterer, bricklayer, stone mason. I mixed mortar for him on weekends from age 15.

I worked construction full-time after high school, as a plasterer and bricklayer’s tender. Was in the union. Did that until the draft came calling.

How did you get into printing books and poetry?

My first couple books were printed in the 1970s: typewriter set, mimeo printed, staple bound. Nice to have, but I wanted better for poetry. Independently studied history of book making, printing, and typography, and often visited the Rare Book Room at the Smith College Library, Northampton, MA.

Took evening course in graphic arts at the local vocational high school where I learned all facets of printing technology (at that time) but concentrated on letterpress printing from metal type. Bought my first printing press 1979 out of the classified ads in the local newspaper. 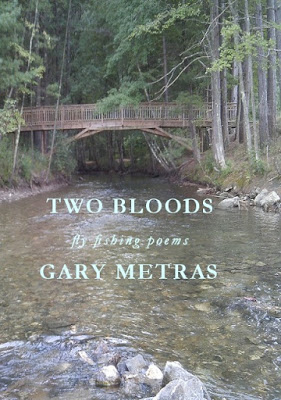 Have printed/published to date through my Adastra Press some 100 titles by 58 poets throughout the U.S. and one from Canada. My own books of poems published include The Moon in the Pool (Presa Press, MI, 2015), Until There Is Nothing Left (Ridgeway Press, MI, 2003), Destiny’s Calendar (Samisdat Press, 1985), The Night Watches (Adastra Press, 1981). 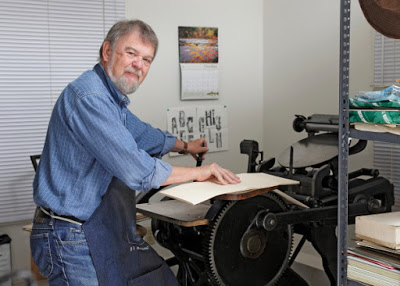 How did you get into fly fishing?

I fished ponds and lakes and the Connecticut River for as long as I can remember with spoons, spinners, worms, dough balls, and caught perch, bluegills, suckers, carp, shad, and the occasional smallmouth bass. One year my younger brother even caught a short-nose sturgeon!

I started fishing trout rivers with ultra light spinning gear when I was about 35, using Mepps Spinners and Rooster Tails, both very effective. At one point I even bought waders, vest, and a net. I fished all the rivers/streams in western Mass. this way.

Sometimes I would encounter fly fishers. Often I caught just as much or even more than they. But I frequently just watched them, the gentle casting, the almost silent action, the easy releases, all this compared to spin fishing.

By my 47th birthday, I decided I was ready for fly fishing and bought myself a cheap beginners fly outfit at K-Mart. I bought and read fly fishing beginners’ books and practiced casting in my back yard on the grass.

The first time I used it, on the Westfield River, I hooked into and landed a nice brookie, and the reel’s click drag button fell off the reel. I returned it to the store, got my refund, added some dollars to that and bought a fiberglass outfit at Sears. I used that for several years, fishing the Deerfield, Westfield, Farmington (in Mass.), Manhan, Millers, and Mill Rivers and caught trout everywhere.

I simply loved the action of a fly rod, of dead drifting a Hare’s Ear, of watching an Adams or Elk Hair Caddis float along the current, waiting, waiting for a strike or a rise. I haven’t fished with spinning gear since. 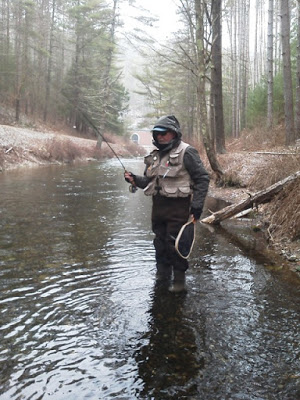 Your favorite fly-fishing moment?
That very first brook trout was magical. Then there was the rainbow trout I caught on the first Elk Hair Caddis I tied myself: in the North River, a nice little feeder stream to the Deerfield that was always under-fished.

There was a 22” rainbow trout I pulled out of the Green River in Leyden, MA that was a marvel to hold in my hand, especially from this smaller-than-small river that I could have leapt over.

And, that 24” landlocked salmon that washed over the dam in high water that one majestic year when the Swift River was full of landlocks and I watched this one take my #16 Partridge & Orange soft hackle I had cast just far enough upstream. The fly drifted right in front of the salmon’s mouth that opened and closed as I raised the rod tip, which sent the fish screaming downstream, then up, then down again with a flourish of double leaps, all as I let line out, hauled in, let it out again, and finally it quieted, and I reeled it in, lifted it in my net, almost kissed it as I released it.

This was on my brand new Sage TXF 1-wt. that Dan Trela made for me three weeks earlier, and, that I was sure would break at least five times during this battle royale, but didn’t, thanks to the powers that be.

What is the best way to improve as a fly fisherman?

The first criterion is keen observation of the water, the habits of trout, the insects on and above the river, along with practice and patience. One has to learn the river, its flow, its quiet spots, its obstacles, its trout holding patterns, and make mistakes, like spooking a holding fish, and learn from that.

Tips from other fly fishers can often be useful but too often need be taken with a grain of salt, until you attempt to act on those tips to judge which fits your own style.

I would closely observe how they held the rod, swung it, released the line, etc., and would wade to other parts of the river that were unoccupied to practice what I saw them doing until I felt I was proficient enough to stand nearby them, casting, catching, and releasing trout.

What is your favorite species to target?

Any trout. But, rainbows make up the majority. But if I see a nice brookie, I will go for it. Same with a brown trout. Whatever is there.

One day last fall, for example, I saw a pair of browns in pre-spawning mode just upstream and close to the bank on my side of the river. I had a Partridge & Orange tied on. I cast a few feet above them and let the fly drift right to them. The brown on the right moved its head to the right, I lifted my rod tip and the trout was on. A nice 15 incher.

After releasing him, I noticed the other brown was still holding in the same spot. I repeated my cast with the same result: fish on. Two nice browns in less than five minutes in the water. That doesn’t happen often, or often enough.

What is your favorite style of fly fishing?

I love soft hackle wet flies and dries. If no insects are on the water and there are no rises, I’ll go with the soft hackle. If there is a hatch, I will try to match it as closely as I can, and keep changing the size of the dry until the fish rise to it. One special joy with that 1-wt. rod is that it is perfect for casting tiny dries, so I’ve learned to tie midges down to size 26 for tiny midges.

What is your go-to rig? Rod/reel, fly line, tippet?

My Sage 1-wt. with my George Gerkhe reel (a limited production original Gerkhe design that was gifted to me by a good friend and former poet laureate of Alaska), a seven to nine foot leader, and 7X tippet. I go down to 8X with the smallest dry flies when the 7X doesn’t work. Though this rod doesn’t handle large streamers or heavily weighted flies, I do use it with smallish streamers and a split shot, and with a 5X tippet.

The fly you use when nothing else is working?

Thank you, Gary! How about a poem from one of your books?

“A Few Feet Away”

For three weeks in February,
the deer carcass,
wedged within the tangle
of downed trees flood-washed
onto the gravel bar in the river,
grew smaller.Tracks of animals in the snow.
Bobcat, coyote, fox.

Someone said they saw a bald eagle
tearing at the flesh.
When I waded beside
those white ribs curving over
emptiness and the ripped
muscle red as berries on snow,I stood there to cast
to the cut bank across the current
where a trout always hid.

There was no smell
of rot to foul the clear, frozen air.
February is like that, sterile
in its anger. You wouldn’t know
death lay a few feet away.

Reprinted from “The Moon in the Pool” (Rockford, MI: Presa Press)
© 2015 by Gary Metras