It was 10 o’clock at night, and the road was getting worse. Recently finished up with a field season in SE Arizona, I was making my way back home by the way of the A-S National Forest before a 1,000+ mile straight shot across country on the 40. Someone forgot to tell 10,000 ft. that winter was over across much of the rest of the country. Functionally what that meant was that the forest road I was taking, when passing through the NE sides of hills, canyons, and mountains, was more than a little muddy. That being said, before I lost light, it was one of the prettiest drives I had ever been down.

Having successfully jammed down the forest road to the more main forest road connection, I backtracked enough to a reasonable camping spot and settled in for the night. Tomorrow I had plans. Well, dreams anyways. I was hoping for a chance encounter with the Apache Trout. So I organized my kit, ate some leftovers from my the last day of the field season and unrolled my sleeping bag. It was a summer bag, and it was supposed to drop to low 30s, so I sealed up in my puffy and long-johns and laid back the seat of the truck and proceeded to pass out, serenaded by coyotes in the near distance.

In the morning I was icy but eager to be off to the Black River. A quick cup of instant coffee and then I had to hit the road, I had places to be and I still wanted to sneak in a couple hours on the river before I had to be driving back home. I always forget how beautiful a mountain morning can be. Almost to my destination, I crossed paths with other forest denizens, including elk, turkey, and bighorn sheep. That was a rare treat. They all gave me the same look: “What the heck are you doing up this early, your lot usually isn’t kicking about for another hour, ya jerk!”

I managed to find the river road pulloff and followed it along for a bit to a fishy looking patch that allowed me some back cast space under the towering ponderosa pines along side the river. The water was high with runoff, the edges where sparkling with hoarfrost and ice sheets, and the pools where glassy. Even though I was freezing, I was instantly in love with the river. I don’t know if the feeling was mutual.

I tried several patterns and styles. And I only managed to get one convincing tug the whole morning.  And that was on a simi-seal leech. I never did get to see an Apache trout in the wild. But the clock had struck the limit, and I was on a schedule to get back to the East coast and I had a literal country to drive across. 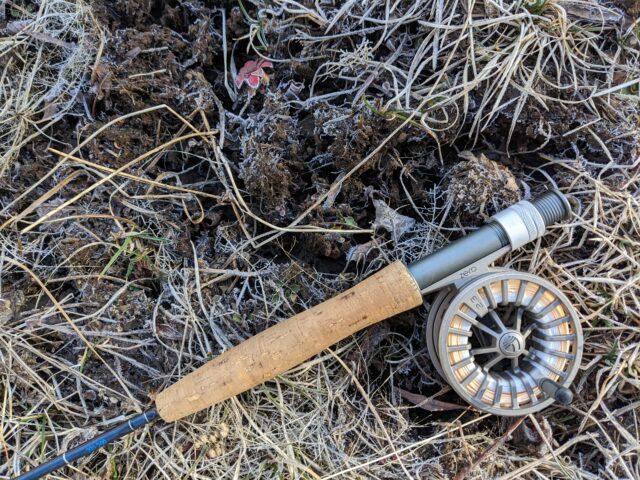 It was chilly. It was a bit of a disappointment not to hook up with the elusive native fish. It holds a mythical place in my head. I was not well-suited to succeed this time, most things were against me. Cold temps, ice cold runoff, high water levels, new territory, and short windows. But it was the first time I had fished for trout in one of my favorite states. I had been woefully unprepared, short of time, and the conditions were only slightly better than the worst they could have been. That only means that I will be back and hopefully with less scenery and more fishery to speak of.

3 thoughts on “Spring Runoff and Runabout in Arizona”