Night was falling, elk were dashing through the forest, and there I was admiring the moon coming in over the sharp canyons hemming me in. Then as I was slowly stripping the last bugger I had on my person, dozens of miles from the nearest shop, thousands of miles from my fly tying kit, something reached out of the dark and grabbed it, stopping the retrieve in its tracks. 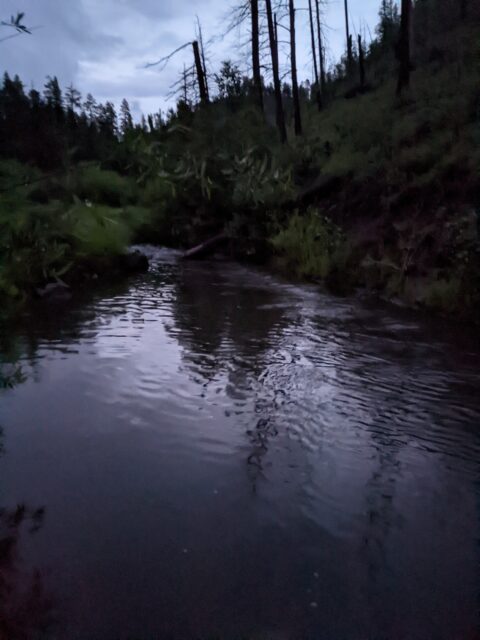 Earlier this year I had found myself on the wrong side of a snowstorm on the drive home from a bout of field work in southeastern Arizona. I was returning from another chunk of work during the summer and had a day to take to myself en route home. So I left behind the desert in full bloom and I traded it in for a rematch with the A-S National Forest. 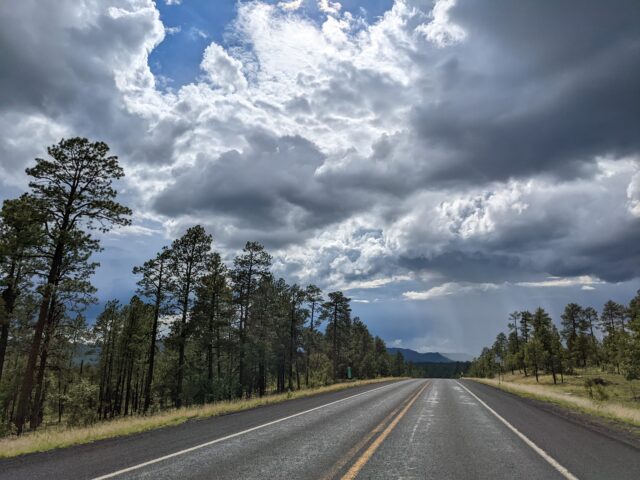 I found my way north into the forest as the sun was starting to fall across the sky, yet with enough time to drop in from the top of the canyon for the East Fork of the Black River. As I dropped down, a serious thunderhead peaked its head over the top of the mountains in the distance. Thankfully, the timing was on my side, the afternoon monsoon storm receding and a slow drizzle settling in for the evening.

I found myself enamored with the trickle immediately. A small creek no bigger than a thin blue line in the northeast, this creek reminds me that like most things in life, the size of a big river is relative. I pulled in and thought of pulling into one of the many campgrounds in this stretch of the river, yet, I couldn’t commit to any one spot and decided to take my chances, and if needed forgo the nice and open lean-to campsite that I was driving past (Diamond Rock Campground is mighty nice though). Almost immediately, a log jam pool emerged into view from the road with tiny little rings of rising fish in the last moments in the afternoon.

Cicadas droning and snake slithering off from the sunning rocks nearby, I pushed through the brush and dropped a line in. I started with a tiny little thing made of CDC and dash of thread. A bit of a emerger, but nothing thought it worth a look. I put a soft hackle and dragged it in some runs to quick success however. The first trout on line in my many years of work in AZ. I thought a dream was coming true! Finally an Apache trout coming to hand. Yet, unfortunately, it was a beautiful but dangerously invasive brook trout parr. 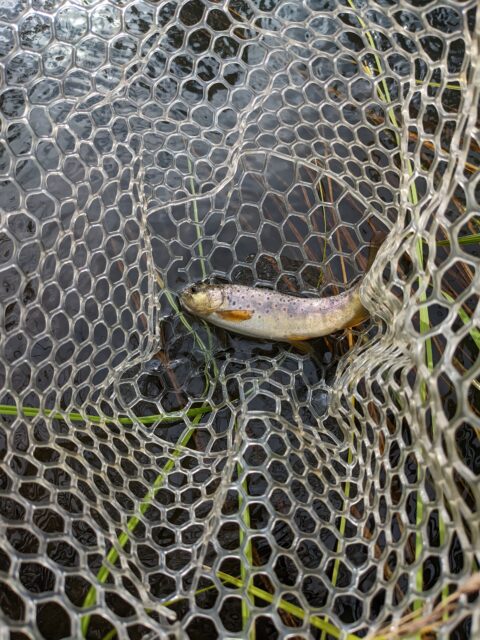 After four more brookies from the same pool, I decided to move down stream and just kept popping through tiny little spots that drew my attention. Before I knew it, it was getting darker and darker the rain got harder and harder and harder and harder and harder…. I stayed out in it. I got soggy, but eventually posted up under a ponderosa pine and set my lighting, I mean fishing rod down when the thunder sounded particularly close.

Thankfully the unseasonably late in the day storm passed quickly; a short jaunt to the truck and a shorter driver further down the river put me into a nondescript spot on the side of the road. The scars of the Wallow fire on the hills around me, regrowth shimmering from the downpour in the evening light. A can of cold soup and a lukewarm local brew (ok and delicious respectively) put me back in the game and shook the chills off. 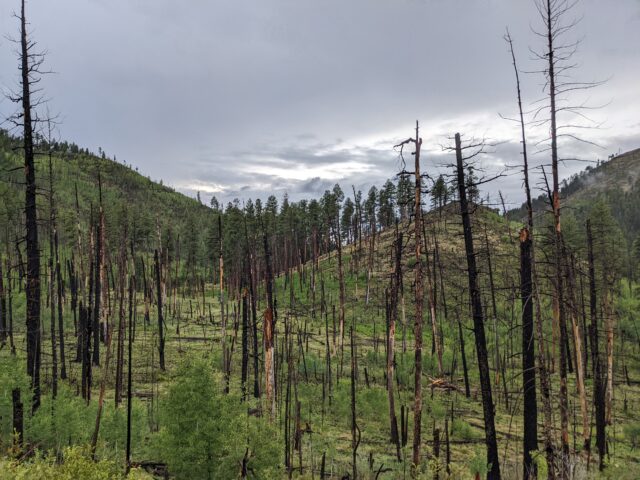 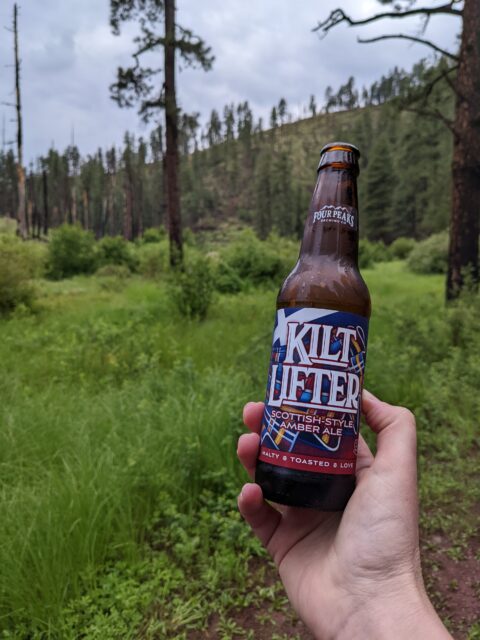 It had been warm enough to wet wade, and I pushed into the brush again, headlight bright and a bit of bad singing to warn any bears from the undergrowth of my approach. I slipped into the tail end of a tiny pool and found a surprisingly deep spot hidden in plain sight. Well, plain sight relatively speaking, when you pushed through a bunch of very, very thick regrowth.

This brings us back to the first couple line of the story. Well almost. I tried several different top water tasties: Caddis and Adams imitations, emergers, Chubbies, ants, and nothing. But I was committed, the light was too close to the end of the day to move to a new spot. And the five-foot wide and 30-foot-long little pool clearly hadn’t given up its secrets yet. So, I fell back on my favorite fly: a semi-seal leech bugger. The best fly on the planet. If I could choose only one to have for the rest of my life, it would be that one. It is the confidence fly.

On the first cast, I dragged it through the churn that pushed into the head of pool, not quite hitting the right line. And the second, was perfectly dropped, plop, into the line. A jig, a bit of pull, and, and, nothing. Nothing. Seriously?! This spot is gorgeous and should have something here. I kept dragging it through for another 10 minutes or so, kinda sad. The only bite I got was on my toe from an invasive crayfish. And then. The moon came out. The sunlight was a purple behind the mountain canyon. And whatever lived in that deep dark pool behind the log and next to the big rock.  It came out of the dark and separated me from my last bugger in my pack. Very quickly.

I was in disbelief. That fish took 4x off like it was 7x with 2 knots and was left on from last trips. And so, trembling with adrenaline, I tried to thread another minnow-ish fly in crayfish colors onto the remaining short section of “tippet” left. I knew that the big brother had been stung and wasn’t coming out, but if there was more than one in there, at least one more decent fish was likely in there.

Two more casts and I was right. And just like that, a couple pulls, a fish was on! You know the feeling when the fish you want is finally on the line. And when it is trying to dive bomb into the inky blackness surrounded by logs. But thankfully I had the line to turn it into the net quickly, even if it was on a three-wt. fiberglass piece of linguini moonlighting as fishing rod. And just like that, an Apache trout was siting in front of me. About nine inches, this little sister of whatever I encountered before, it was a big fish for that size of creek. And all day in the rain was well worth it for that moment. That was my last cast that evening as I pushed back to my truck. I had another day ahead of me to find out so much more about this special place.