Well, it was definitely a weird fishing day for me.

Maybe it was coincidence, but two other blog team members, at a different river, reported the same thing: rising fish that were very selective.

On Sunday, I again found myself stalking for morning trout with dries. It was very frustrating to see dimples and float “killer” dries that had done well previously…only to find no takes. I did get one fish into my net, but I wasn’t sure if that was random or not. At least, the skunk was off.

Eventually, I rotated through enough flies to find the key that unlocked things for me: a Griffith’s Gnat with a shuck. I ran into this situation at a different river last year. Rising fish that in the end submitted to the ol’ GG. And, if the fly didn’t have a shuck, it didn’t work. Who knew?

Soon, I couldn’t believe my luck and and managed to land a good number.

In his amazing book, Tying Small Flies, Ed Engle writes about the importance of the shuck. He has a great recipe for Roger Hill’s Stillborn Midge, which he notes is the most effective midge pattern in his fly box, and that was the pattern that worked for me. I wrote about it previously (here), and here is a photo. 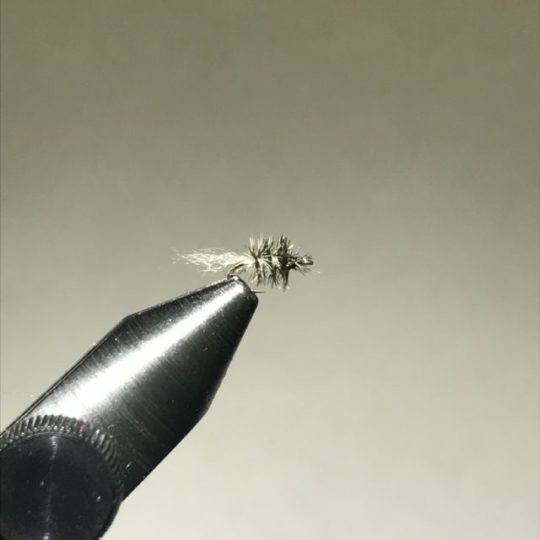 With the sun bright, I proceeded to chuck wet flies at a spot that usually produces incredibly well for me. I managed one small brown…and, that was it. Mysterious. I was doing what I usually do at the same spot that has generated a lot of fishy interest. But, not on Sunday.

After lunch, I hit new water, wondering what would happen. I came upon a small pool above a main pool. The sun was behind me, and it gave me a great view of the shallow water. I couldn’t believe it. Fish were rising, and there was a good-sized trout every five feet or so.

I scouted around: I didn’t find fish above that area or below it. And, I was the only angler there, as the tightliners crowded the fast water well above me and as other anglers fished the main pool below me.

I love this type of dry-fly experience: you can rotate through flies and see the fish react or not. It’s a great way to experiment with various patterns and drifts. In the end, emerger patterns in sizes 22 and 24 ruled the day. The fish wouldn’t take anything bigger.

They also wouldn’t take anything smaller. I fished a bunch of my tiny Swift River dries, and they too were ignored. It’s something I’ve observed over the years: the patterns that tended to work at the Swift for me didn’t work at other rivers. And, vice-versa. The Swift is an anomaly, which is both good and bad.

There was a lot of bug activity, and the fish kept feeding. They weren’t that spooked, and most of my fish, amazingly, were caught within a rod length or two of the bank. And, they were in shallow water of about two feet or less, which let me get a good look when they reacted to a fly I was offering.

At one point, the afternoon glare became very bad, and I started to fish blind. I went below an area where I thought I saw some good-sized fish, cast at it, saw and heard a take, and set the hook.

Immediately, I felt a lot of weight, and the fish shot to the other bank on the far side. It ended up being this beauty. 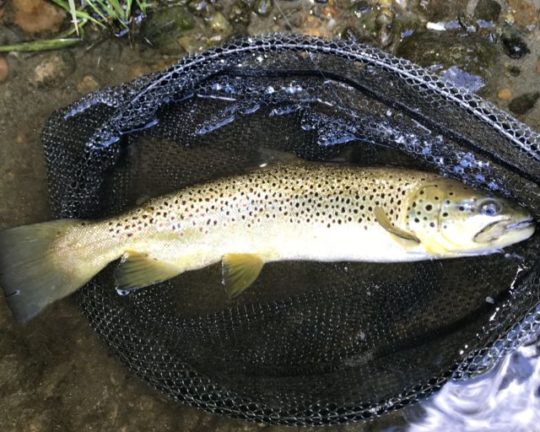 The brown taped at 17″ and was caught on a size 22 Mole Fly. With a green elastomer behind the left eye, it was a holdover Survivor Strain brown stocked in 2019. I checked the spot afterwards. The brown had been holding in about six inches of water. Amazing!

More bits of knowledge emerged, such as this one: I had been testing various Mole Flies and, on Sunday, they didn’t want a slim body. They instead looked for a heavily-tapered one. Again, more weirdness. The slim bodies did well the other week. But, somehow, the fish got a memo and agreed to change their focus.

After 12 hours of fishing, and with fish still rising, I looked up the time. Wow, the day had whipped by!

If I were to make family dinner, I would have to skedaddle, I realized. After some more casts, I painfully reeled up and walked to the car. It was tough to walk away from rising fish! But, I had learned a great deal already and had landed a large number of fish that day, nearly all on dries.

Our blog team jumped on a DM thread when I got back. We shared observations about the day. It’s a fun part of being on the blog team. (So, if you’re interested in joining, which requires committing to just one blog post a month, make a comment below this post, and I can reach out?)

Fly fishing is pretty amazing. It always keeps you on your toes. In any given moment, you can lose your mojo. But, if you’re able to find it again through trial-and-error, it makes for a memorable outing.

Tight lines to all….