I awoke early this morning and checked the gauges. With time limited to fish, it was tough to know where to go, given the intense rain that had fallen and was still falling.

But, something caught my eye: the Swift River flows at 1,500+ cfs, which I believe is an all-time high. I just had to see it.

Moreover, I rarely fish that river these days, as I think better fish and fishing are available at other places, and the Swift River crowds deter me.

But, with a hard rain and high flows, I assumed few would be out. Plus, for a while, I’ve wanted to see where the Swift trout go when water is really churning out of the dam. There’s a particular stretch that I thought could hold them, and I wanted to see if my guess was right.

Unsurprisingly, I didn’t see anyone else when I got to one of the parking areas. You could hear the river from far away, a distinctly low rumble of powerful water, sounding both ominous and sonorous.

Paths were flooded, side braids existed where none did before, and the landscape was waterlogged and looked entirely different.

Then, I got to the river. It was quite a sight. White water, waves, and submerged banks. Some tall and regal trees were now mini-me versions of themselves, so high was the water.

I walked slowly and kept my eye on the water’s edge, looking for short slicks that exist away from the main and powerful current. This was a stretch of the river that I thought could shield some fish during high flows.

Soon, I saw the a fish (in the middle of the pictures below).

A trout in such a context is amazing to behold. As the world around it churns and chaos reigns, a fish can sit placidly in a cushion of soft water, lazily finning.

I edged towards the bank but access was tough. Trees were all around. But, I started to work the water.

I threw all sorts of flies in all sorts of ways but couldn’t get a take. Periodically, I would see more fish along this particular stretch, but in all cases, it was tough to reach them.

I threw with both my #6 tightlining rod and my #7 switch rod, which was paired with a double-tapered line, making for easier roll casts. I lost a lot of streamers and nymphs.

At one point, I slipped into the water, but thankfully it was only a partial dunk. Of course, there was cold rain and wind, too. This kind of fishing definitely was not for the faint-of-heart.

But, it was nice to see fish where I thought they would be, although this was a “you can look but you can’t touch” outing.

I hit a few other spots but didn’t see any other fish. So, by mid-morning, I reeled up and decided to head to BT’s for some ribs. 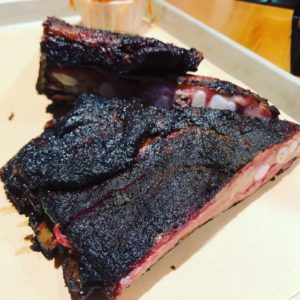 When I arrived at 11.30 am, the line was already to the door. Thankfully, I snagged a seat at the counter amidst a line of other guys. And, there we were, all silently eating ribs with our hands in a silent and communal caveman-like ritual.

Hey, I love catching fish as much as anyone, but a good session at BT’s is a tremendous consolation prize.

Leave the dry flies at home, folks. More rain is coming the next few weeks.