Now that I’ve been fly fishing for six years, I am (slightly) more calm when I arrive at the river.

Previously, there were so many things going through my head:

It was a miracle that I landed fish, which was rare in the beginning but gradually improved over time. I’m a self-taught angler, and I have made many mistakes. But, I think the self-taught journey is why fly fishing is so fun for me. When things click, it is very fulfilling.

So, with my brain less cluttered now, I more readily observe my surroundings. My focus is not on the water or the bugs many days. I’m focused on other anglers who know what they’re doing.

If I see a fellow fly angler landing fish, I pause and watch. Where are they fishing? What techniques are they using? What drifts are they employing? The last question has generated a lot of value-add. Let me explain.

Recently, I had a glorious outing at the Farmington. The river holds now oodles of new fish, and that means the right technique can generate the numbers, if that is your goal.

For me, action was slow until I incorporated a trick two old-timers taught me years ago when we split water at the Natchaug River: Pulse your fly.

We had stumbled on a huge pod of newly-stocked trout, and I was getting blanked while those guys were hauling in fish after fish. They were very friendly and called me over. They spoke just like Click and Clack, complete with witty banter and thick accents.

They were fishing the same nymph I was except they gently added movement to their flies during the drift. Once I did the same, the switch flipped, and the numbers rolled in.

So, I stood there puzzled at the Farmington with nary a fish. New stockies were everywhere, but they weren’t taking my offerings. Then, I decided to pulse my fly three-quarters through the tightlining drift, like I do with my Euro-Streamer and “pocket pick” approaches. That same switch then flipped. Many fish said hello.

I then jumped in the car and moved to a new spot. Nothing. Then, I again pulsed the fly, a different one. The switch again flipped. I switched flies. Again, dead drifts didn’t work. Then, piles of trout again showed up as soon as I added pulses to my drifts.

So, it clearly wasn’t the fly or the spot. It was about movement.

I’ve found that movement in the spring also works for savvy fish. Many spring-time nymphs are swimmers and go up and down before and during a hatch. Movement then becomes a strike trigger.

All this leads me to my first point about watching others. During the aforementioned Farmington outing, I observed an experienced angler whom I don’t know and who regularly lands fish. It has been fun over the years to watch him elegantly cast and land trout.

While most of the productive anglers at the Farmington tightline, this individual and a few others do well with a different method. What is it? Bobbers.

That’s right, no fancy Euro rigs, monster streamers or tricked-out gear. They throw indicators, and, depending on the amount of split shot they use, will cast a small one or an absolutely giant one, like the ones we used as children.

The technique? Letting the fly swing up in front of the trout. The Farmington’s regulars know where the fish hold during each season, time of day, type of day and level of flows. They accordingly position themselves above those areas.

When I observed this particular angler’s drifts on that day, he was not swinging the fly across, side-to-side. He instead was casting and mending so that the fly ended the drift by going up. That was when all of his strikes happened, it seemed.

After seeing this, I reeled up to find new water. Tired of seeing very pale, shocked and newly-stocked fish, I moved to a new stretch that was far from a stocking point.

The water looked shallow but featured the “nooks and crannies” I love to fish, the rocks, mini-runs and slight indentations that can hold fish and which other anglers ignore. Classic “B” water. The Farmington is loaded with it.

The water was perfect for wet-fly fishing: a very long, deep-enough and quiet stretch along the bank, adjacent to the fast current. Wet flies have been a new technique for me this year, thanks to fellow blog writer Joe Drake and Dave Hughes’ Wet Flies.

I put on two soft hackles and landed a good-looking 14″ brown after one cast. It fought brilliantly and was the fish of the day for me. It was just beautiful. 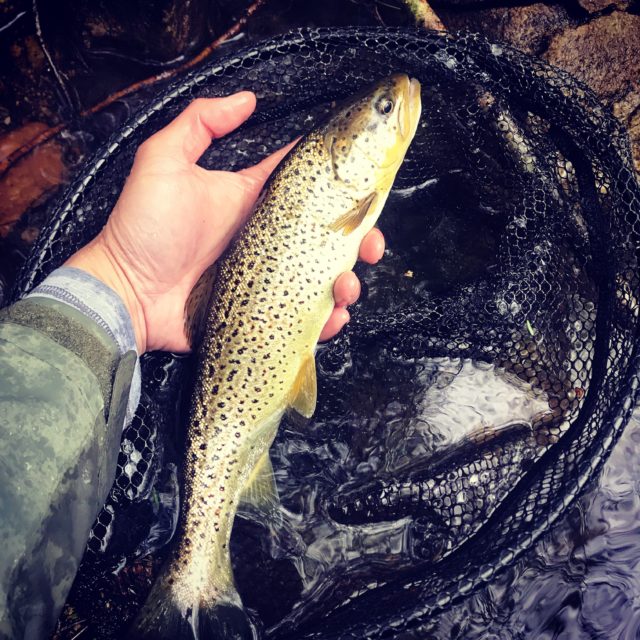 That stretch of water accounted for my most fulfilling hour among the 10 that I fished that day. It was meditative: hugging the bank, casting, mending (which you can do easily with the Euronymphing rig), and letting the flies rise and then dangle at the end of the drift. Then, I would take two steps downstream and repeat.

I like all types of fly fishing, but wet-fly fishing is the bomb. Takes on that day were savage, and it took a lot of self-talk not to pull the fly out of the fish’s mouth after a strike. I reminded myself to pinch down on the line and wait for the fish to turn its head in panic after feeling the hook. Once the fish pulled line, I gently raised the rod tip.

A double-digit pile of fish graced the net at that run. As I walked back to the car, I actually exclaimed “Alleluia!” It was a fun and fulfilling session, far from any other angler. Whether it was luck or skill, wet-fly fishing had clicked.

Also, the fish weren’t monsters, but when a downstream fish was on amidst the strong current, they felt like absolute giants. To land the trout, I had to use tricky side pressure angles while avoiding the nearby tree branches and bushes, and all that made it even more exciting.

So, those are my two cents. For both new and savvy trout in the spring, add movement to your drifts. I hope the technique works for you, too.

6 thoughts on “Trout Tip: Add Movement to Your Fly”