After Saturday’s morning pilgrimage to Les’s Pool, I spent a few hours at the Swift Hatchery Pipe area (aka, The Toilet Bowl or The Kiddie Pool). “Dries or die” with my #4. I went six-for-nine. 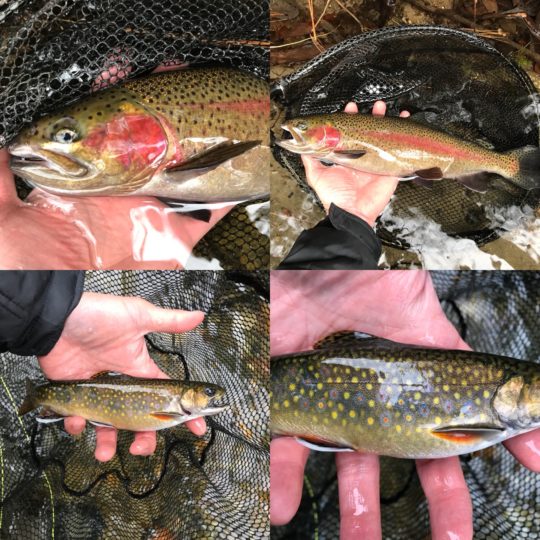 Unfortunately, I witnessed quite a bit of foul-hooking. Here’s what happened.

There was a strong waft of marijuana. I turned and saw an angler positioning himself below me. I said hello.

He started to actively twitch a fly at a redd loaded with fish. I was paying attention because his backcasts at times were headed for my head.

He had a take, but the fish popped off. He kept at it and then foul-hooked a fish. The rod looked very light, and I later learned it was bamboo. The angler couldn’t gain much line. Over time, the fish pulled him downriver, and the battle continued.

A friend showed up to help net the fish. There were a few attempts that didn’t work.

The rod tip was straight-up. The battle kept going on and on. I don’t think I’ve ever seen a longer fight for a regular-sized fish.

It was a first for me, but I decided to say something. He was pretty far downriver. I yelled over that he should apply side pressure or break off the fish because it could die.

That prompted some yelling from him and an ensuing back and forth between us. Honestly, I became really ripped. I’d wager that the trout later died.

For some reason, there’s a lot of foul-hooking going on. Throughout the outing, I saw a different angler foul-hook a few fish. One of the rainbows I landed had a puncture wound in its belly.

So, I’m wondering about two things.

First: How do you break off a foul-hooked fish when you cannot gain ground on it? (My approach: Point the rod straight at the fish so that there is no bend. Then, reel in while not letting the fish pull any line. If the fish surges, it breaks off.)

Second: How do you graciously give unsolicited feedback? This was my first time speaking up, and I clearly need to do a better job or just stay quiet.

In the end, I do feel bad about the altercation. If you’re the angler and are reading this post, I’d love to give you some of my flies to show you that I truly apologize. Email me.

But, I do hope that you can find a way to break off fish without damaging your bamboo rod. Or, use a heavier rod if you’re new-ish to fly fishing.

7 thoughts on “Breaking Off a Foul-Hooked Fish?”