TL;DR: The Swift River below Bondsville. Many wild brook trout. Potential for solitude. 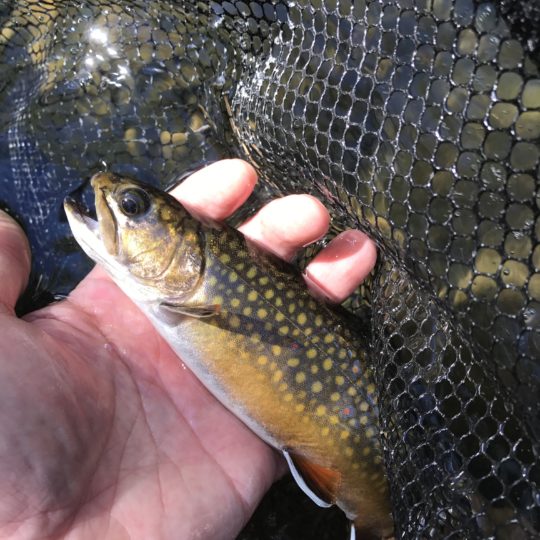 Below the waterfall at Bondsville and until the Ware, the Swift River is productive water. We’ve written overviews of the Swift that cover the areas around Rt. 9 and below the Hatchery Pipe. Legendary angler Gary Metras has a special presentation on winter fly fishing at the Swift, complete with detailed fly recommendations.

In this post, I’ll be covering the area at Bondsville and below.

I first read about it in Tom Fuller’s awesome book on S. New England trout waters (link here), and Troy wrote in a comment a bit ago that he has landed brookies around there. So, it has been on my to-do list.

Eager for new experiences, I decided to explore.

There are two things to note about the Swift south of Bondsville. First, the conditions are more like a freestone. Water comes out of the Quabbin and gets pooled at a succession of dams. The water warms up, and there are more nutrients. This means more bugs, both in variety and in volume.

Second, the Swift below Cady Lane is “catch and keep” 100% of the time. Bait is always permitted. So, there aren’t as many rainbows. But, there are plenty of wild brookies, which I find to be the prettiest fish of all. 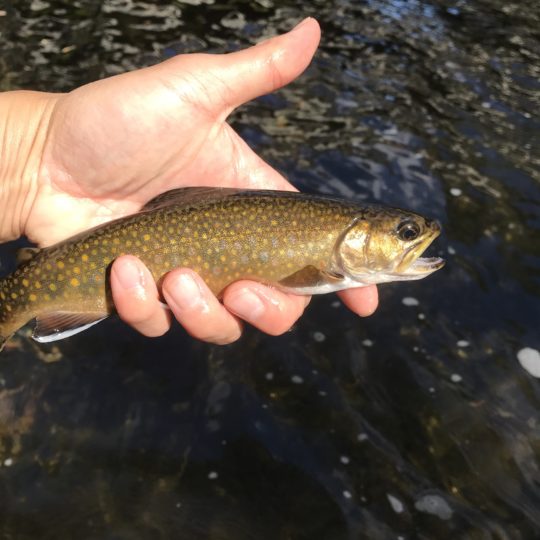 Here are some areas to get you started:

THE LOWER BONDSVILLE DAM
Park at the dirt area west of the bridge. Cross the street and follow the well-worn dirt path down to the river.

It’s a gorgeous stretch of water and is ideal for Euro-nymphing: pockets, seams, runs and glides. It reminds of the Connecticut River’s “Trophy Stretch” in Pittsburg, NH. I saw plenty of bugs, both caddis and mayflies.

This is a stocking point for rainbows. There also are wild brookies in the quiet seams. 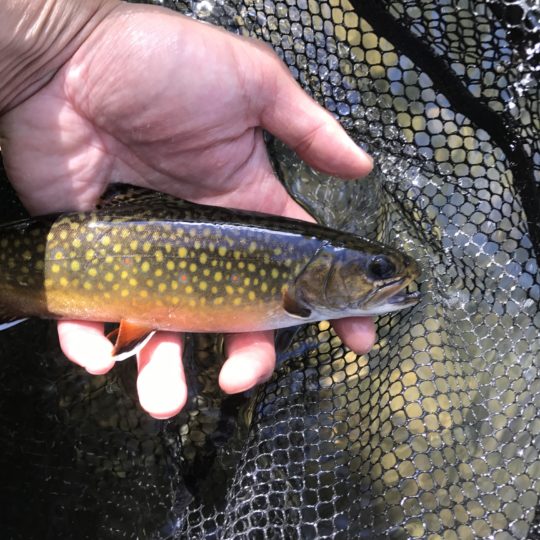 When I fish this kind of water, I start by going upriver and tightline nymphing. At this stretch, the best fly thus far has been Lance Egan’s Red Dart (prior post here).

I’ve noticed that brookies and rainbows (but not browns) in fast water really like a fly like the Red Dart and the Rainbow Warrior. I always have both with me.

After working an area like this thoroughly by nymphing, I then turn around and swing a heavier fly to work the tail out of a deep trench, or I work the soft seams near the bank with a light streamer. The JT Special streamer did well at this area.

This area gets pounded right after a stocking, but Fuller notes that few people fish it once the easy pickings are gone. I have been the only angler there.

INTERSECTION OF THE SWIFT AND WARE RIVERS
For fun, I sometimes look at Google Maps to see which stretches of rivers have structure and look interesting. I then look at Maps in “terrain” and “street view” modes to see if there are any pull-out areas for parking.

On a hunch, I thought that confluence of the Swift and the Ware could have potential. Via Google Maps, I found this parking area.

There’s some good-looking water on the way to the confluence. I fished it, but with water low, didn’t get any takes. The intersection of the two rivers, though, was interesting.

I saw some dark figures along the sandy bottom. I tightlined some heavy anchor nymphs and got takes. This is one reason why I use an all-mono Euro-nymphing rig. You can fish very deep trenches and enjoy maximum line sensitivity. Some takes I saw, but most I felt.

The anchor had to be a something substantial, like my favorite Mop Fly or a jig-style Pat’s Legs. Unfortunately, I there went one-for-five. Tough hook set angle, really hard to set the hook well when I had a ton of line out, fish rose to the surface quickly after being hooked and created slack, blah, blah, blah. Unfortunately for me, the one fish I landed was a sucker. 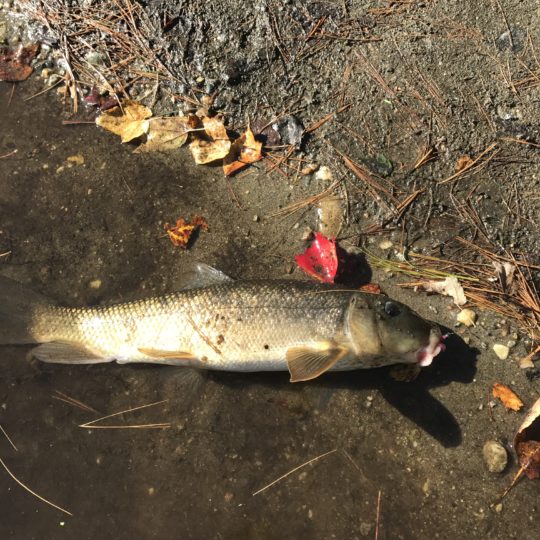 As I’ve written before, those fish freak me out. I won’t touch them. Also unfortunate for me, while trying to unhook the sucker without touching it, the dropper fly hooked into my finger. Thankfully, I had my hemostats. No pain, no gain.

THE IN-BETWEEN SECTION
There is some great water between Bondsville and the Ware River. Some duds, too. But, it is worth exploring and taking a look at Google Maps yourself. It is fun to find spots!

During a recent outing at a particular stretch, fish after fish slammed the JT Special. I love that streamer because it works, and I can see fish take it. The wild brookies certainly were not shy and wanted my offering to lift up (vs. a side swing). Maybe 10 takes or so in a short amount of time, some of which were vicious.

And, not an angler in sight.

So, I hope that gets you going. It is very fun to explore on your own and find some productive stretches.