If you’re a parent, you too are familiar with schedule-juggling, seizing short windows open to fishing, and making time for your family.

Today, I found myself in a familiar situation, which called for the “run, gun and done” play. It meant getting up early to fish and striving to be home by noon. We have extended family visiting.

It’s all good. Out-of-town family members are awesome. But, if I need to sacrifice sleep to squeeze in some fly fishing, even better.

Before I went to bed, I wasn’t sure as to where to go, given another ample rainfall. I awoke at 3.30 am and checked the flow gauges. All signs pointed to the Swift River (overviews here, here and here). It was at a high 188 cfs, but other rivers were much worse. I’ve never fished the Swift at such a level and looked forward (finally!) to seeing something new there.

I texted Alex, who also was heading in the same direction, and we later crossed paths and shot the breeze. What a great guy! The best nympher at the Swift, IMO.

I hit Spot A, below Route 9, and thankfully tightlined some good fish right off the bat.

With that, I reeled up and decided to explore. I walked a long way, looking for signs of piscatorial life and didn’t see anything. Once I’ve landed fish, I don’t mind pursuing low-probability forays to learn something new.

Later, I headed above Route 9. Water was coming down the spillway, which swamped the usual currents from the Bubbler, making the Y Pool seem more like a lake. I tightlined one fish in that area and then fished my way back to the parking area, until I ran into eight anglers crammed into a 100-yard stretch.

I found some open areas, but the same guy came in a few rod lengths away on two occasions and cut me off. I decided it was time to move on. It just wasn’t meant to be.

So, I headed to a favorite area south of Bondsville and tightlined one fish. The flows were high enough for streamers at some areas, and it was nice to cast, swing and retrieve. 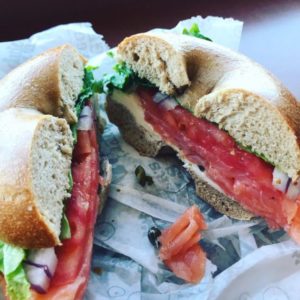 Soon, the wind really started to kick in, leaves poured into the river, and it was time to finish the morning outing. I gunned it back home.

In our town, a bagel with smoked salmon and cream cheese made for a great lunch. Piquant capers added a nice zing. A hot cup of coffee was very soothing.

Another run-and-gun now done. A chance to be outside, on the water, is always a peak experience. We are very fortunate to have public lands in our country.