There is something special about catching trout on a dry fly. The rise, the take, and the rush of feeling a trashing weight at the end of the line. This summer has provided some excellent fly fishing opportunities due to the heavy rainfall. At times, the fishing has been tough, but a combination of cool nights and warm days has kept the fish looking up. I expected Saturday to be no different.

When I got to the river at 9 am, it was around 40 F and the water felt almost as cold to the touch. Since the sun had started creeping over the trees and hitting the water, I started off throwing a #16 royal wulff to gauge the general mood of the fish. Nothing doing. Eventually, I caught one bow on a pheasant tail, having switched over to tightline nymphing. From then on, the action crawled on with some suspected bumps but no hookups for a while. Eventually, I got fed up and switched back to dries. I kept fishing over likely looking spots without a single look, thinking each time “this is going to be it,” but moving on disappointed. At my wit’s end, I reached a deep bend pool, thinking I would turn back if I couldn’t get anything. Then it happened. 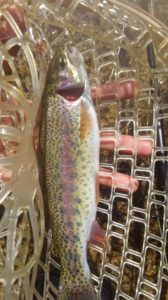 A few drifts over the tailout to the pool and I had rose a bow. It rose slowly from the emerald depths and took the dry ever so gently but I lost it soon after. Not long after that miss, I rose another and landed it this time. That was more like it! I made more drifts over but saw one consider coming up but stopping and turning back halfway up. My drift was drag free and it didn’t appear as if the trout was spooked so it left me wondering what was going on. I tried a few more drifts without any looks before I decided to switch to indicator nymphing to dredge the bottom. A quick change in position and a few casts later, I was on! I was a little slow on the take as the indicator just barely paused, but luckily that bow soon came to hand. A cast towards the head of the pool revealed a small wild brook trout as well, my first of the day. It didn’t stop there. 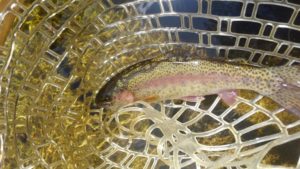 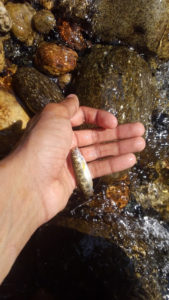 For the next hour or so, I picked up many wild brookies and one stocked one all on nymphs. There was a brief lull in the action when I broke off a nymph rig and decided to throw dries instead. All I got within this time were a couple of lethargic, missed rises and no hookups. I knew the fish were there since they spooked when I moved past. It then occurred to me that these fish wanted nothing to do with surface flies and I once again started nailing them on nymphs and even wooly buggers sank deep and stripped slowly. Bows were once again in the mix with wild and stocked brookies. Everywhere that looked like it held fish did. Hot flies were olive wooly buggers (#8-10), pheasant tails, hare’s ears, and soft hackles. 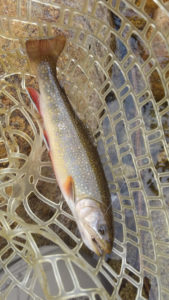 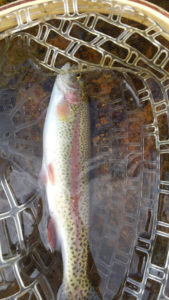 As I was getting ready to leave, I finally saw what I went there for; rising fish. The risers were feeding in the tailout of a long glass-like pool that looked more at home on the Battenkill than a high gradient White Mountains stream. These trout were extra skittish due to the still nature of their pool so I took extra careful steps in positioning myself properly before making my cast with minimal disturbance. At this point, it was more hunting than fishing. I will admit that stalking trout is not my forte, if not my absolute weakness. A few casts with my small royal wulff revealed just how fussy these fish were. I stood in position for a few minutes more, patiently watching the risers until I saw a tiny blue winged olive gracefully flutter off the water’s surface. The bwo looked to be about a size 20 but the smallest I had was a size 18 so I threw it on hoping for the best. My third or so presentation to the riser closest to me was rewarded with a splashy take by a spunky little native. Unfortunately, the commotion of the take and the fight had seemingly put off the other fish and I saw no more rises even after a 5-10 minute wait. Still, I could not have been happier than I was at that moment. 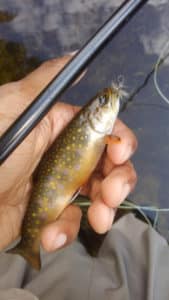 The fishing on Saturday was tough but rewarding. It was more of a spring training for the fall season than it was a late summer trip. The window on wild trout will to be closing up in the White Mountains and it seems like it is occurring earlier due to the recent string of cold nights. These fish will soon migrate to spawn and fishing will slow greatly. Go out and catch these aggressive pre spawn fish and remember to fish the conditions as best as possible. 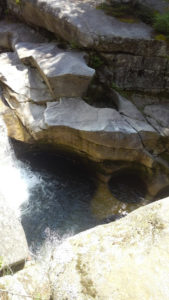