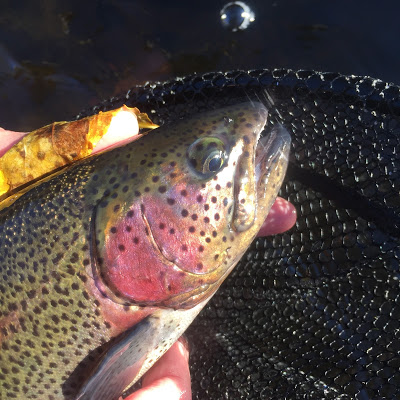 It was a cold outing at the Millers. No bugs. A cold snap the night before seemed to have made the fish lethargic.

No takes at my newly favorite spot. None either at a new spot that previously produced. I did find a good number of fish in one stretch and landed six or so rainbows. They were down on the bottom, in a quiet seam. Even with tightlining, takes were nearly imperceptible. In fact, I connected with many fish as I was setting up for a back cast. Made me wonder how many takes I missed.

My newly-tied Mop Fly produced. But, it didn’t do any better than other ones, namely Walt’s and Sexy Walt’s. And, after a fish or two on the Mop, the other fish became wise and developed lockjaw. They still took other flies, however.

So, my takeaway is that there is no “magic” fly. I think reading water and technique continue to be an angler’s best assets.

I was the only angler on the water, and it was nice to be outside.

2 thoughts on “The Mop Fly in Action”