I hit a familiar spot at the Millers.

The rainbows there were amenable but much more selective than the two previous times. My Perdigón flies didn’t work. Nor did streamers or soft hackles. I think they’ve seen them too often. So, I rotated through other flies.

Like all highly-pressured trout, their takes on nymphs were very subtle. After being hooked, they also ducked towards structure, and a few broke off. It is amazing how fast these creatures become conditioned to their new environment.

Later, I ventured to some new water and found many rainbows and browns. It was a series of pocket water and longer glides, perfect for tightline nymphing. I’m amazed by how large and robust this river is and am grateful that we have such a great body of water.

The weather was cool, but not cold. Some wind, but nothing that interferes with nymphing. The leaves were nearly at peak with their fall colors. I crossed paths with four anglers throughout the day, and each person was friendly, polite and engaging. I think we all were just pumped to be on the water.

In other words, it was a perfect New England autumn day for fishing. Today, the normally reliable size 20 soft hackle produced little. Few bugs were popping in the morning. So, I went for attractor nymphs to kick it off. These don’t imitate a particular bug, but can work in this type of situation. The biggest producer was a black Sexy Walt’s with green flash for the ribbing material. And, the ol’ reliable, the Frenchie, produced, too. Al’s Rat made a debut in my fly box and also delivered (video up top), but the Sexy Walt’s was the #1 fly, by far.

My new Syndicate 10′ #2 did a great job on its second outing. It is incredibly sensitive, and felt every bump and subtle take, it seemed. But, for longer casts on a river as big as the Millers, I think the Sage 11′ #3 is a better fit. That stick can really cast from afar, which is what I need when water is so low and fish are on high alert. I’ll go back to my old standby next time.

It was a delight to be out. And, when I found a particularly dark and feisty rainbow, it was a joy. 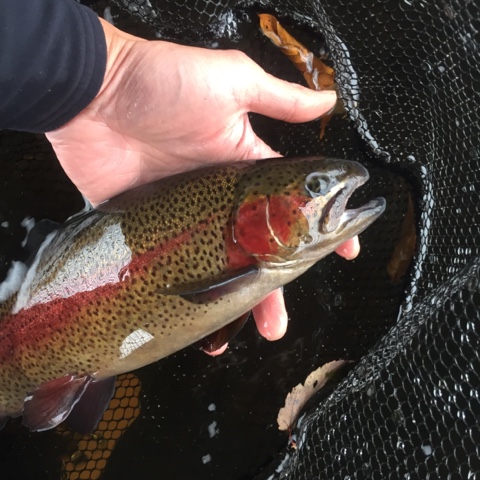 On the drive home, another rainbow showed itself. A good omen, methinks. 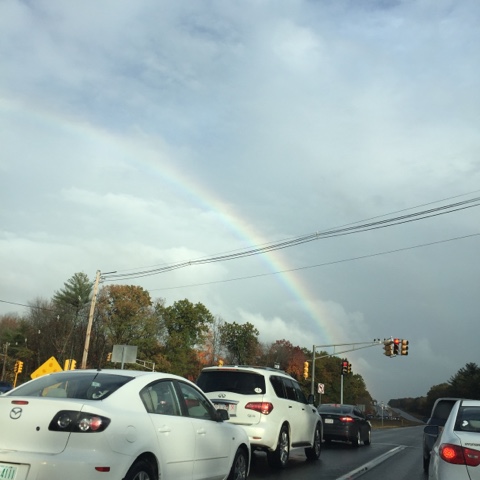