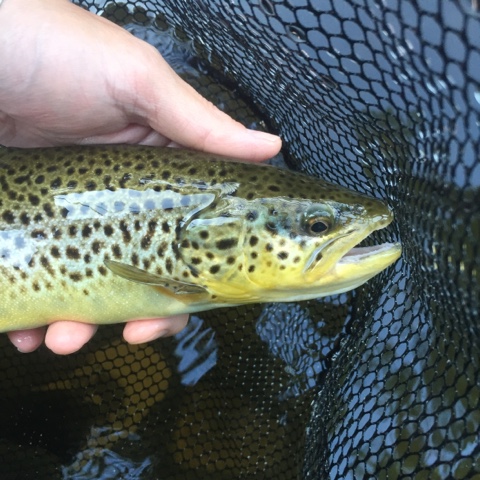 I fished the Farmington. I didn’t know what to expect with the water at 100 cfs. But, I read online that they might lower the flow to 50 cfs, and so, I thought I’d better hit the river.

When I arrived at Spot A, two other anglers were there. One was a spin fisherman, who was very friendly and soon left. My gosh, the water was very, very low. Most important: water temperature was a cold 65 °F. So, it was show time.

Like the last time, I wasn’t having much luck tightline nymphing. That is such a surprise for me, as that technique produces. Even with super-long casts and light nymphs, I received no takes. But, this time I came prepared: I brought a 2nd rod, set up for dry flies.

I started with a #20 X Caddis and landed a good-sized fish, about 13″. Photo up top. Suddenly, dozens of fish were rising. They were leisurely porpoising and gobbling something.

I stomach-pumped the first trout, and it was jammed full of what looked like Tricos. So, I fished off the X Caddis a dropper fly, a #28 black WD-40, which resulted in five takes and three fish landed. After 30 minutes, the hatch ended. I kept fishing but couldn’t get another take. So, I headed back to the car to go to a new stretch.

Spot B was a surprise. I wasn’t expecting much, but decided to target a shaded part of the river, near some riffles. It’s not an area that is fished much, and, perhaps, that’s why the fish were stacked in there. I lost count, but I landed about 10 or so brown trout in a 20-yard stretch, with the biggest fish coming in at about 13″. The water was only about 18″ deep. I’m amazed that so many fish stealthily hung out there. You look at that shallow seam and cannot see any fish. But, they were there in spades.

The best fish there was one that popped off. I had a good look at it and almost put it in the net. A grizzled and large brown. The best fly combo in that area was the X Caddis with a #20 black midge larva as a dropper, about 6″ down. I tied on a short tippet to make sure I saw the take (more here), as experienced and wary fish will quickly taste and spit out a fly.

Spot C was a dud. Nothing.

Spot D is a dry-fly spot. Unfortunately, three big groups of people in swimming tubes floated down. They didn’t have paddles and floated right through the run I was fishing. Oh well. A few were nice about it and apologized.

There, I hooked some big fish, including a 15″ brown (photo at bottom). Yup, on a dry-dropper set-up. Later, a big rainbow fell for a midge larva and fought like crazy. It smartly broke me off on an underwater branch.

Then, it started to rain. A welcome sight to see! I had enough fishing at that point and decided to head home. 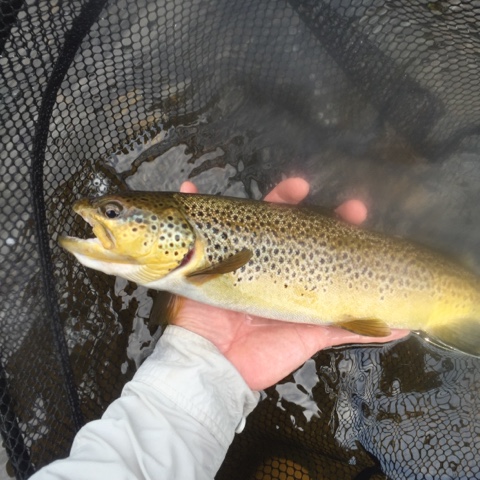