With one of my two jobs temporarily done until January, I looked at the calendar and realized that I could squeeze in a fishing trip. In the winter, there’s really one fish I want to see: steelhead! It had been a few years since I last was up in Pulaski, NY. It’s a very friendly city and has a unique vibe to it.

I booked a long weekend up at the Salmon River and prepped my gear. Steelhead fishing at the Salmon River is an ordeal. People arrive early to claim their spots well before dawn and sit there in the dark for a few hours. You cannot start fishing until 30 minutes before sunrise, but all the choice spots are taken well before then. Groups of anglers often take up a whole run, and they bring portable grills, seats, food, and drinks and stay there all day. So, it’s a total arms race to get to the spots early.

That’s what I did during my prior three trips: get up very early and trudge through the snow with a back pack loaded with gear, a portable seat, and enough food and water. (Some prior posts here, here, and here.)

I’ve always wondered what it would be like to float the river and not have to deal with the crowds, the ordeal, and fishing in water that is 32 to 34 degrees. So, I booked Eric Geary of SWAT Fishing. When one of his clients cancelled last minute, I was fortunate to have two days of floating with him. Eric has great people skills, and we had some awesome conversations and quite a few laughs.

We were onto fish early each day and had double digit takes. Eric has a magic fly that he has developed over many years, and it produced like crazy. Some fish became unbuttoned in heavy current, and I missed some hook sets. But we saw quite a few good fish in the net.

The biggest steelhead weighed in at just under 10 lbs. and was a complete beast. Maybe 28”?  I’m not one for hero shots, and I certainly feel like the fish was the result of Eric’s hard work and expertise. So here is The Fish of the Trip, with Eric as the real hero. 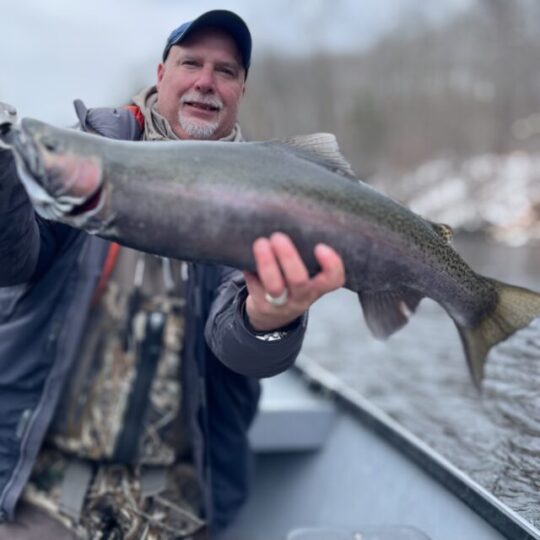 Eric, thank you for being a great guide and an awesome person!