I believe it was Oliver Wendell Holmes who said, “There’s no tonic like the Housatonic.”  That certainly was true of my Memorial Day fishing trip.  As chronicled here on this blog, many of my outings this past spring have needed some tonic, if not some Red Bull.  But today’s trip to the Housatonic River in Lee, Massachusetts, was just what the doctor ordered.

With sunrise at 5:13 am and east-facing blinds that are no match for the morning light, there was not much use trying to sleep in.  I backed out of the driveway at 5:30 am and pointed the nose of my car westward down Mass Pike.  Exactly one hour and forty-five minutes later, I tapped my brake for the first time to disengage the cruise control and took the Lee exit.

Not long after we moved to Massachusetts nine years ago, I heard that the Housatonic River was a good place to fly fish.  I saw a few videos on YouTube of some guys finding success on the Housy, but I had no idea where to begin.

One day when I was at Concord Outfitters, I noticed that they had a fishing report for the Housatonic on their big blackboard.  I asked one of the gentlemen who worked there if he would give me a clue where I might get started on the Housatonic.  He was kind enough to tell me to find the big Y where the river goes through Lee.  He said I should try above the big Y and below it.

As soon as I got home, I clicked on my Google Map and looked for where there was a tributary that came into the Housatonic to form a Y in the river. A tributary near Lee was not to be found.  I could not find a little Y or a big Y.  Man, those guys who work at fly shops have no conscience about misleading a fellow. Not long after that, I saw a TV commercial for a grocery chain known as “Big Y”, and the nickel dropped.

Since then, several other kind souls have suggested some places to try.  The Housatonic is a haven for brown trout until mid-June when the water gets too warm and the smallmouth bass take over.

When I reached one of my favorite spots early Monday morning, I was disappointed to see that the river was high and appeared to be muddy.  According to my unreliable memory, the river is fishable when the flow is 600 cfs or less.  On Friday, it had been about 250 cfs, but there was a big thunderstorm on Saturday that sent it up to just over 500 cfs, where it stayed all day Sunday and into Monday morning.  It looked high and fast and chocolatey to me.

If there is a knock on fishing the Housy, it’s the water levels.  They always seem to be too high or too low.  When it is high, it’s a raging torrent and can’t be waded.  I’ve driven all the way out there several times over the years and found the level too high.  There was nothing to do but get back in my car and drive home or to find another river.  After eye-balling it, I decided to give it a try, and if it was too blown out, I’d stop by the Swift River on the way home.

I decided to start with a chartreuse Mop Fly and a beaded soft-hackle Pheasant Tail.  After about five minutes, to my delight, I found myself in a tug-of-war with an 11” brown trout.  He took the Pheasant Tail.

As happens to me so often when I catch a fish right off the bat, it took me two hours to catch my next trout.  At that point, the Housy was lousy.  I fished all the tried-and-true places where I had done well before and didn’t move a fish.  I wound up working my way downstream to a place that attracted a lot of fishermen. I had it all to myself.  This could be a good sign or a bad sign.

As it turned out, the water was too deep for me to wade and my effort to get my tightline rig into the far away target zone was fruitless.  I moved downstream a little further, wondering how long it would take me to drive to the Swift, when my line went tight and a hefty brown trout was giving my three-weight rod all it could handle.  Two more browns in the 14″ to 15” range also came to my net from that same general area, all on a tan Mop Fly.

The irony of the Housatonic is that it is resplendent with natural beauty and at the same time it’s one of the most polluted rivers in the United States.  For years, companies dumped toxic chemicals into the river with abandon.  There has been a multi-million dollar effort to clean the river up, but people still are warned not to eat fish from the river.  That makes the river a great trout fishery because people are more likely to catch and release their fish than put them in their stomachs.

Every time I go, I marvel at the birds, the flowers, and wildlife that live along the river.  The first two or three times I fished on the Housy, I had banner days.  I’m not much of a dry fly fisherman, but I had one of my best topwater days ever on the Housatonic.  Even though I only fish it once or twice a year, I have caught more doubles on the Housatonic than everywhere else combined.

I decided to walk back to where I started the morning, mainly because I had left my dry fly rod hidden in some bushes.  There was a lot of bug activity on the river and I was hoping to see some rising trout.  But I saw no risers all day.  Somehow, with the sun up higher and the shadows off the water, what looked like a muddy, raging river earlier in the morning,  looked like a slightly stained, very wadeable river now.

It was only 10 am and I couldn’t resist going back around to my favorite spots for a second try. I’m glad I did.  I caught five browns from 7” to 17” in about an hour.  Most came on a Pat’s Rubber Legs or soft hackle Pheasant Tail.  I also had a double, if you count a brown together with a smallie.

I was getting hungry so I gulped down a chicken sandwich as I drove to my second favorite spot.  I caught a smallie on the first cast, foul-hooked a brown trout soon thereafter, and caught two large warmouths in the first pool.  I cast to the other side of the river and before I knew it, a fish took my fly and jumped three feet out of the river.  He was easily two feet long.  He went up to the next pool and burrowed deep into a root ball before breaking me off.  I’m not sure if it was a trout, a pickerel, or nuclear submarine.  I just know he was big and I had no chance. 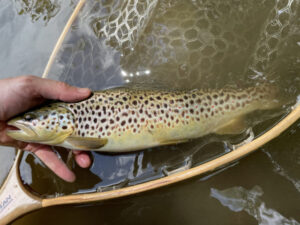 For the next 30 minutes, I was getting aggressive bites on nearly every cast.  I was in some fast water and I lost several very nice trout, but managed to get a few to the net too.  After dealing with Covid a couple of weeks ago, my stamina is not what it should be and I decided to call it a day about 2 pm.

The final tally was 14 browns, 5 smallmouth, and two warmouth.  I wouldn’t mind a daily dose of those vitamins.