Welcome to our latest blog team member, Spencer Belson! This is his first post on our blog.

While rivers in northern New England only continue to get more crowded, especially in western Maine, it seems remote stillwaters have been spared from the added pressure. If you asked just about any fly shop owner where the hot action was this spring and early summer, they would likely offer just three words: “Fish the ponds.”

So, with rivers high and ponds supposedly fishing well, my 80 year-old grandfather and I decided to take the advice of all the stillwater chatter we’d heard and give it a shot ourselves.

It wouldn’t be our first time fishing ponds together; we’d done so on a number of occasions during our trips to western Maine, often quite successfully. But it would be our first time fishing a truly remote pond together and a special pond at that. The pond we had in mind was one that my grandfather had fished frequently as a kid with his parents. On summer evenings, the family would drive the old station wagon about a mile or so up some fairly well-maintained logging roads. Once the road petered out, they would hike the remaining two miles on well-worn paths. They kept a canoe stashed along the bank, and also fished from some crudely lashed-together wooden rafts.

My grandfather claims the pond was one of his favorite places to fish because he only needed a few Wulffs to guarantee success. Even when the fish weren’t rising, he says, they’d still catch them in good numbers on dries. Of course, for the trout to be so gullible, they couldn’t have much size to them; eight inches was the average, and a 10-incher was a trophy.

But many years have passed since the glory days of that pond, so both my grandfather and I were interested to see how it had fared through the decades. However, the one thing people don’t seem to focus on about fishing remote ponds is just how difficult they are to access.

Of course, after 60+ years, the logging roads that once clearly led the way to the pond were now unused and overgrown. Though we spent hours poring over topo maps and satellite images, we had no real idea of the path we would take. As it turned out, it was a bit more complicated than we bargained for.

The hike was meant to be three miles in, three miles out, and on abandoned logging roads until the final half-mile or so. While we understood the roads would be grown up with young evergreens and shrubbery, it would be immensely better than trekking through the dense forest surrounding them.

However, after about a mile on the abandoned roads, staying out of the woods was no longer an option; the trail had simply ended.

So we did what we had to do to reach the pond. We bushwhacked our way to the pond’s outlet brook, then followed that until we reached another abandoned logging road. Unlike the previous roads, though, this road was littered with boulders and discarded sticks from lumbering, which had been grown over with a thick mat of grass. These unseen obstacles made for easy ankle-breakers, which, by some miracle, we were able to avoid.

What was more difficult to avoid was the moose droppings scattered throughout the trail. It seemed every five feet we’d come upon another pile, obviously indicating we were on some sort of moose super-highway. At each muddy section, there were monstrous hoof prints to prove it.

Eventually, with a little help from trails created by our big-game buddies, we did reach the pond. As we paused for a moment to take in the stunning view, complete with mountain vistas and blue skies, the buzzing started. It was no surprise that it would be buggy, but it was still disappointing to have to pick black flies and mosquitoes out of my peanut butter and jelly sandwich with each bite. Nevertheless, the beauty of the landscape rivaled that of any I’d ever seen, so I simply pulled my bug net a little tighter and took in the view. 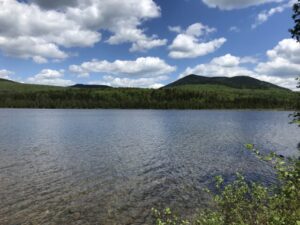 I could immediately see why the pond had been such a hit with my grandfather’s family. Its silty bottom, dotted with rocks, reminded me of many other northern New England trout ponds I had fished. Many of these ponds support robust insect populations, lending themselves to stupendous dry fly action.

The quickly sloping shoreline lent itself to fishing from a watercraft, but for a kid with waders (did I mention I lugged those all the way up to the pond?), getting more than five feet from shore was difficult without going over my chest. To make matters worse, a steady breeze blew through the valley, churning the water’s surface and making dry fly fishing impossible.

Instead, I tied a mohair leech on a sinking leader and fished as far as I could along the southern shoreline. Without getting into too much detail, I had no luck. The only fish I saw, which were really mere shadows through the mesh of my bug net, were the minnows that filtered through the silt I kicked up as I waded along the bank.

While there wasn’t much entertainment at the pond, there was zero part of me that desired to begin the long slog back to camp. But alas, there were still a few juicy looking spots along the outlet brook I wanted to try, and the light would soon be fading. My grandfather and I started the return trip the same way we’d ended our arrival, but when we came to a road crossing – the only decently-maintained logging road along the entire proposed route back – we decided to switch things up a bit.

“If we take this road, we’ll eventually come to the road that will take us back to camp,” my grandfather explained, peering at the map printouts we’d brought along. “It’ll be an extra mile, but I’m fine with that if you are.”

“If it means we don’t have to fight our way through the woods again, then I’m down!” I replied enthusiastically.

It didn’t take long before the road crossed the pond’s outlet brook at a spot that looked too good not to try. The high gradient created deep, clear plunge pools where wild, native brook trout surely hid. I tied on a fly I knew would draw the attention of any salmonid inhabiting the stream: a parachute purple haze. If I could bring just one fly with me on every small stream fishing trip I went on, it would without question be the purple haze. Just like kids drawn to fruit-flavored gummies over the real thing, trout seem to prefer artificially colored flies to more realistic tones any day. 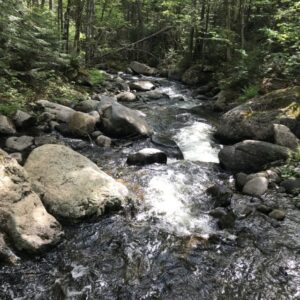 With just minutes to spare if we hoped to make it back to the cabin before dark, I got into position just downstream of the most perfect plunge pool I’d ever seen. I drew my fly back beside my ear like an archer preparing their shot, then let it fly inches below the frothy water of a small waterfall.

The fly drifted downstream a ways, inching along in the gentle current. As I was about to pull the fly from the water, something rose in its vicinity, then…a fish! A spunky silver creature appeared at the business end of my line, leaping a couple times before surrendering to my outstretched hand.

When I opened my palm to admire the fruit of a long day’s labor, I was surprised not to find a green-backed, square-tailed char, but instead a parr-marked landlocked salmon. I knew there were plenty of salmon in the river this brook fed into, but for one to be up here, so many miles and hundreds of feet of elevation away from the river seemed quite impressive. Nevertheless, it was a salmon, and a much-appreciated skunk-breaker at that. Never had I been so happy to catch a five-inch fish. 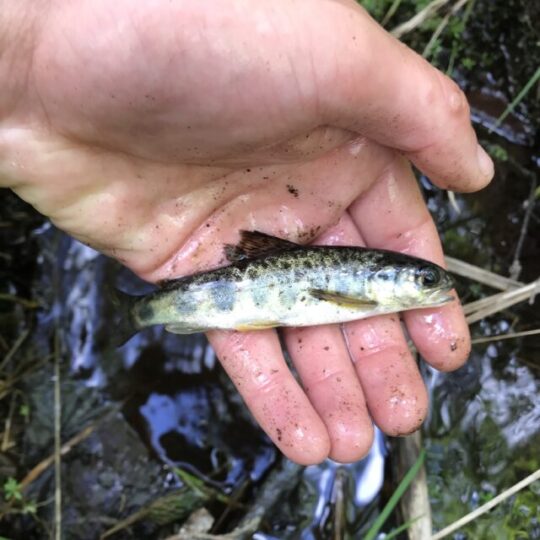 Now I was relieved that the trip hadn’t been all for nothing. I slowed my pace a bit to soak in the wild scenery. While the brook looked quite similar to many others I had fished across New England, there was a sense of adventure I hadn’t felt on any water before. It was rather humbling to have worked so hard for so little, yet also gratifying that I had conquered this wilderness landscape and all the obstacles it had thrown my way. When a second fish, this time a small brook trout, fell victim to the purple haze, I felt satisfied that I had accomplished what I came here to do. 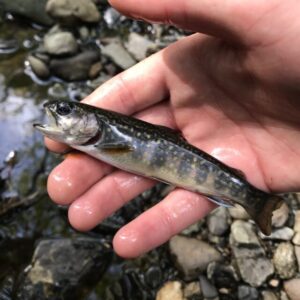 The walk back to camp ended up being six miles, not the four we had counted on. Some may say we hiked nine miles through bugs and brush for two five-inch fish, but really the trip was about so much more than that; the memories I made with my grandfather (did I mention he is 80?) will be everlasting, as will some of the black fly-induced battle scars, it seems.

Reconnecting with my grandfather’s roots wasn’t just important for him, but also revealed a crucial part of my identity. Though my address may read Massachusetts, at heart I am a Mainer. From the first step through moose scat-laden backwoods to my final glimpse of the pond, I felt right at home. Are there bigger fish to be found in a region as legendary as western Maine? Undoubtedly. But will I ever catch a fish as meaningful and empowering as the two I caught that day? Unlikely.

5 thoughts on “Return to Maine Roots”