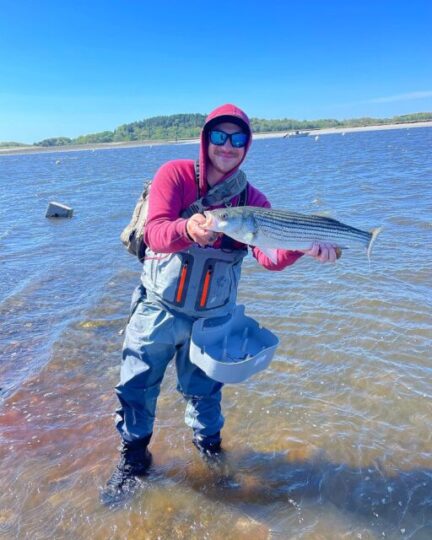 After a long winter spent at the vise tying saltwater flies, spring finally came once again, and my favorite yellow-eyed fish, the Striped Bass returned to the shores of Massachusetts.

If there is one fish that the New England coast is known for, it’s stripers. They are the perfect fly rod fish. They are opportunistic feeders, and they inhabit many shallow water habitats. On top of that, they fight like there’s no tomorrow!

As a big streamer guy, they’re one of my favorite species to target because it’s a fast paced, long casting form of fly fishing. Stripers will challenge your angling abilities, while at the same time they will surprise you with how easy they can be to catch.

These last few weeks of striper fishing have been incredibly productive for me and many others, so I wanted to write this post to encourage anyone who hasn’t tried saltwater fly fishing to get out there and hook a memory!

Lots of trout anglers I talk to have told me that they find stripers on the fly intimidating or daunting. Indeed it is a big ocean, and it can be hard to know where to start. I’ve also talked to a lot of people who gave it a try, didn’t have success, and then gave up. I believe the key to any type of fishing is taking it off a pedestal, putting time and research in, and then simplifying it. Start with small bite-sized pieces of advice and test them out. The biggest key to hooking a striper is finding them. They are a sea run fish that are always on the move, and they are constantly looking for opportunities to find a meal. Very often if you can find them, you can catch them. So let’s start with where to look.

Early season stripers typically migrate up from the Hudson or Chesapeake Bay and usually will gravitate to the estuaries of New England. While you can catch them in the surf or on beaches at this time, you may find more success targeting salt marshes, river mouths, and inshore flats. Not only will the water be warmer in estuaries, but the stripers also find food opportunities like chasing herring, bunker, and shad into rivers.

On top of that, these habitats are filled to the brim with crabs and shrimp, and the fish will gladly take any fly resembling these crustaceans. Try to look for areas that go from light to dark, such as boulder fields, rock points or drop offs. Many times I will start fishing an estuary two to three hours before dead low and then fish the first two hours of the incoming tide. It’s all location dependent. This time frame can be very productive at river mouths as the stripers will ambush baitfish coming out with the tide and then chase the baitfish up river with the incoming.

As the season progresses, more fish start showing up with every tide. Around late May and early June, you’ll start to see the larger bass showing up close to shore. The big cows have been spawning during May and will now be showing up close to shore and in the estuaries looking for food. Early June is one of the best times to catch a memory on the fly as these fish are hungry and eager to fatten up after the spawn and migration. Fishing larger flies that resemble bunker, herring, or mackerel can be the ticket to hooking a 30″+ fish.

When we get closer to July, the fish will change locations and move to their summer structure. We’ll cover that later on when that time comes. For now, get out to the estuaries and get some fish on the line!

Now let’s talk about gear and flies. Stripers are typically fished for with eight to 10 wt. rods. I personally like a nine wt. for an overall rod in the salt as it’s proved to be the most versatile in different situations for me. Larger rods certainly help with reeling in some of the larger fish, but the main reason for using them is their ability to cast larger flies with ease, and be able to cast them far. Saltwater is one of the few applications in fly fishing where distance matters. It’s important to be able to cast a four to five  inch fly 50 to 60 feet or more.

For a reel it’s important to have a large arbor with a solid drag system. Striped bass are strong and having the drag set appropriately is essential. These fish will frequently take you into your backing while they dig down with the fly. Let the drag do the work and take your time.

For fly lines I personally prefer an intermediate line like the Rio Coastal Quickshooter. Floating lines are great for top-water action, but you’ll find that an intermediate line is more applicable in most situations. They’re strong enough to pull a buoyant fly below the surface but they also sink slow enough to keep you from snagging bottom every cast. Intermediate lines are also a joy to cast and can really add some distance. Depending on location and tide there are times when you may need a fast sinking line to get big flies down quickly. These are especially helpful when fishing from a boat. The whole idea is simply to get the fly to the fish quickly.

For a leader on an intermediate or sinking line, you’ll want to use no more than four feet of 12 to 20 pound mono or fluorocarbon. Short leaders are key to letting the line drag your fly down. For floating lines on the flats, you’ll wanna use at least a nine-foot tapered leader for a stealthy presentation.

As far as flies go, the sky is the limit. Stripers are very opportunistic and at times will eat anything that moves. That being said, my top producing flies are Blane Chocklett’s Game Changer, Clouser Minnow (chartreuse over white, olive over white, or all black) and Surf Candies. Clousers are like the Woolly Buggers of saltwater fly fishing and you can never go wrong throwing one.

Hopefully this helps some of you in the salt this season. See you on the beach!