After 16 years of the same routine, it feels rather weird to not have to ask my parents for a ride any time I want to go somewhere. Negotiating a ride to a fishing spot – especially if that spot was over 20 minutes away – was always an awkward battle between not wasting too much of my parents’ time, and getting to go where I wanted. Then there was the issue of fishing time. If my parents couldn’t drop me off, then they sure as heck didn’t want to be waiting in a freezing or boiling car while I disappeared along a stream for six hours.

But now, with my newly acquired driver’s license, I have the freedom to fish where I want, when I want. Well, almost; the busy schedule of a high school student continues to reign me in, but at least I have the illusion of freedom.

So, what to do with all this newfound independence? Go fishing, of course! As my first “big” trip, I decided I’d venture to the Quinapoxet River in search of cool water and hungry fish. Lucky for me, I found both.

The only other times I’d fished the Quini, or at least attempted to, had been in the fall after trying the nearby Stillwater for salmon. Both times I had fished near the sediment dam through a torrent of stained floodwater. My fly would barely touch the water before being swept downstream in the raging currents. Not optimal fishing conditions, to say in the least.

When I arrived at my spot for the day, further upstream from the dam this time, I was pleasantly surprised to find the river looked much more like a small stream. The effects of the recent drought were obvious, with the river quite low and clear. Still, my water thermometer read 64 degrees, so I was content to fish it.

I began the day with a Chubby Chernobyl up top and a Hare’s Ear dropper. Each little pool or piece of pocket water I tried looked promising, and nearly every one held fish. Only trouble was, they were too small to fit the oversized Chubby in their mouths, and wouldn’t eat the Hare’s Ear dropper. At least there were plenty of fish!

As I made my way downstream, I ran into another angler who was more than happy to share his success. He claimed the hot pattern of the day was a rubber-legged stonefly nymph, which he was naked nymphing through the larger pools. Having caught a decent rainbow, a couple wild browns, and a bunch of native brookies, he said it was his best day on the river ever. A fish had even broken him off, a rare occurrence in a stream of this size. This report gave me faith in the water I was about to fish. However, it also concerned me that it might be a bit picked through.

As we talked, a monstrous golden stonefly flew from the bank of the river and onto a nearby tree. The insect confirmed that his choice of fly was a good one, and gave me some ideas for patterns I would try later.

After that encounter, the fishing got really tough. Admittedly, the water looked much better the further downstream I worked, but the fish simply weren’t where they should have been. Large boulders formed juicy-looking pocket water, yet I couldn’t get a strike on anything I tried. After cycling through dries, nymphs, wets, and streamers with only a colored-up common shiner to show for my efforts, I was frustrated and at a loss. My mind began to wander with the thought of going home trout-less. I even allowed myself to trip and fall, something I seldom do on the river.

When I finally turned around to start heading upstream again, I told myself it was a fresh start. I didn’t have much time remaining, but I would make it count.

About halfway through my return, I reached a slow, meandering pool. I took a second to analyze it, examining the currents and holding spots within it. With a golden stone stimulator tied on, I made my first cast into the pool, hoping for redemption. It didn’t take long before a fish lazily came up and took the offering. I half expected it to be a small brook trout, but when the line tightened, I could tell this was no six-inch native.

The trout dug hard into the deep pool, and I worried my 5x tippet may have been no match for his strength (don’t ask why I was using 5x tippet on a size 10 Stimulator). But eventually the fish surrendered, and a beautiful 15-inch rainbow glided into my net. From the bridge above the pool, a hiker called out, “Nice one!” I couldn’t have been happier. 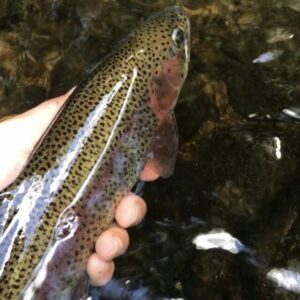 Once the rainbow had been released, I got right back to fishing. On the next drift through the pool, another fish came up and took the Stimi. This one felt a bit smaller, yet still respectable. When it glided into my net, I was elated to find it was a brook trout that went all of 11 inches! Its body was dark, its flanks artfully covered in haloed spots, and its fins crisp and clean. This was my new personal best wild Massachusetts brook trout for sure!

As I pulled out my phone to take a picture, the fish spit the hook and squirmed through one of the holes in my rubber net. I can’t even begin to describe my disappointment, but if there’s one thing I’ve learned while fishing, it is to never get upset at the fish we lose; there will always be more opportunities. Besides, the ones that get away always make the best stories.

After this fish, I just about called it quits. I lost a couple more four-inch brookies at my feet on the way back to the car, but nothing close in size to the big one. I’m certain that trout will forever haunt my memories.

Out of curiosity, I checked the stocking report for the river once I was back at my car. What I found was shocking: in addition to the regular rainbow trout that are stocked every year, brook trout had also been stocked. So was the big brookie I had caught earlier wild? I’d like to think so; its appearance showed all the signs of being a wild fish. And yet, it was living in a pool with other stocked trout. Furthermore, it was about the same size as those that get stocked.

But it wasn’t the fact that the big brookie could have been stocked that angered me the most. It was the fact that I had, with my own eyes, seen plenty of wild, native brook trout in the river that really ticked me off. Why stock brook trout over brook trout? The Quinapoxet and its tributaries are known for holding thriving populations of wild brookies, and yet the state thinks it necessary to augment these populations with frail, possibly disease-carrying fish that likely won’t make it more than a month after being stocked. This decision confuses me, but then again, I’m not the fisheries biologist. I just hope these gems of the Northeast will continue to persist through blunders of humanity as they have for centuries.

As a final note, where does everyone keep their licenses, keys, and other valuables when they’re on the water? Now that I’m at that age, carrying around my driver’s and fishing licenses, car keys, and phone in a non-waterproof pocket of my backpack or waders seems irresponsible, especially after my tumble earlier in the day. Plus, bringing my whole wallet is bulky and seems unnecessary. Ideas are welcome!

18 thoughts on “Early Summer at the Quinapoxet”