As persistent rumors involving local fisheries ooze out like sweet molasses in January, one has to wonder if there is any truth to them.  Some say there’s no way.  But as others say, where there’s smoke, there’s fire.

If you haven’t heard it yet, the rumor is that a certain guide service that locates itself in New England has discovered a fly that trout find truly irresistible – year-round.  They only let certain high-profile personalities and those with deep pockets have access to it.  But even before their clients are allowed to see it or fish with it, they have to sign a non-disclosure agreement that holds them to the strictest secrecy about the fly.

According to the agreement, the clients are not allowed to describe what the fly looks like, try to tie a fly for themselves that seeks to imitate it, tell others how effective it is, or acknowledge that the fly even exists.  Once this document is signed, the client is allowed to use the fly. At the end of the guide trip, all flies are collected and accounted for before the clients can leave the drift boat.

There have always been efforts to keep certain flies a secret from others.  Recently, a Joe’s Mini-Crayfish pattern has been one of the “hush, hush, you know if you know” kind of flies. Do you remember when certain competition anglers tried to keep the Mop Fly a secret?  This is the same idea, but from all rumors, this new fly is even more lethal to trout than the Mop Fly or Joe’s fly.

And to top it off, it’s a dry fly.  They call it the Manhattan Project, named after the top secret World War II effort to produce the ultimate weapon – the atomic bomb. 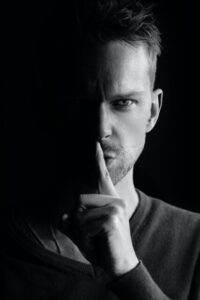 How did the word get out?  Are you serious?  How many fly fishermen, whether celebrities or not, can NOT talk about the best day of fishing they ever had or could ever dream of? The word leaks out in all sorts of ways. Friends have been sworn by their scout’s honor to secrecy.  Conversations in pubs have been a little too loud.  And there are some who forget about the nondisclosure agreement just a few minutes after signing it.

Understandably, the unnamed guide service is going to great lengths to keep its secret fly a secret. Fisherman B told me that he set the hook too quickly on a rising trout and the fly shot out into an overhanging tree branch where it got wrapped around a limb.  It was too high to do anything with but to break it off.  The fly was left hanging on the branch.

As any of us would have done, Fisherman B surreptitiously found his way back to that tree a few days later, but he was too late.  Someone had already lopped off the limb with a chain saw and taken the fly with it.

According to a local fly shop employee, some of the guides from this certain New England guide service have shown interest in buying all the pink and green ice dubbing that the shop can get their hands on, as well as deer hair taken from a very sensitive part of a deer.  Just like with a good brownie recipe, the scuttlebutt has it that some baking is involved in this fly pattern recipe. There might or might not be a mealworm glaze on the deer hair.

But, if you want to know the real secret to this magical fly, go back to the first sentence of this article and look at the first letter of the first ten words.  Then, you’ll know everything that I know about it.

13 thoughts on “The Manhattan Project”