If you haven’t been fishing, you’re not missing much. The waters are very high and very cold. For some rivers that have been stocked, I hear that the action has been non-existent. I wonder if the “first round” stocking has been meager as the trucks dash from spot to spot in a frenzy.

I’m eager for spring fishing, which is why I awoke at 3:30 am, checked the water gauges, momentarily lapsed back to the rational world, and read until 5:30 am. Then, it was time to get the show on the road.

I loaded five fly roads into the car, as I didn’t know how I wanted to fish and ended up doing a little bit of this and that: bobber nymphing on the four-weight, tightlining with the Thomas and Thomas Contact II, and throwing articulated streamers on the seven-weight (that made no sense, naturally).

By lunch, I was freezing, hungry, and feeling pretty disappointed. All that work and not even a single take. To boot, I was getting a horrible headache to the point where I was feeling nauseous. I’ve never had a migraine, and I wonder if I’m due.

I decided to hit “one last” spot, hoping against hope. And, wouldn’t you know it, but the sighter paused slightly, and I felt a bump on the all-mono rig during a decent midge hatch. A short while later, a very feisty brown hit the net.

The fish taped a little over 15″ and fought like something bigger. I think my mind can play tricks like that as I milked the “fish on” experience as much as possible.

Suddenly, the headache was gone, I felt energized, and decided to keep fishing. I ended up working more water for another three hours in the cold rain and had just one other grab from a fish that mysteriously popped off. 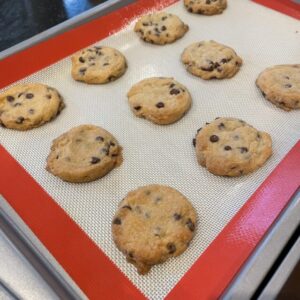 At least, today was a bit of redemption after last week’s skunking. And, I arrived home just as two trays of homemade chocolate chip cookies came out of the oven.

There were barely any anglers out. The sane people were home.